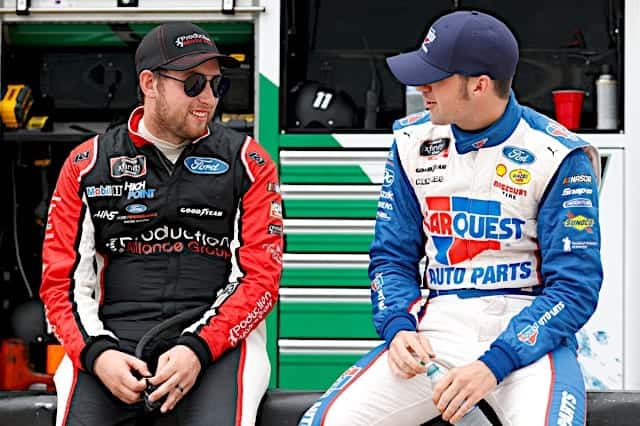 If you were to rank the most surprising winners in the NASCAR Cup Series in 2022, Austin Cindric and Chase Briscoe would have to be at the top of the list. Cindric shocked the NASCAR world with a victory in the Daytona 500, which was just his eighth Cup Series start. Briscoe earned his first win at Phoenix Raceway three weeks later. It was fitting that Cindric and Briscoe, who battled for the NASCAR Xfinity Series title in 2020, became Cup winners for the first time just a few weeks apart.

Far less surprising is the struggles which they have endured since their respective victories. Cindric has just one top 10 since his win. Aside from Daytona International Speedway, his season has looked like a more typical rookie campaign, full of ups and downs as the driver and team try to learn what they need from each other each week. Briscoe, last season’s rookie of the year, has cooled off since Phoenix. On several occasions, the No. 14 team has struggled to close out races where it showed the potential for a top-five result.

However, there is a good chance that the tide can turn back in Cindric and Briscoe’s favor before the playoffs begin. The remainder of the regular season features four stops at road courses: Sonoma Raceway, Road America, the Indianapolis Motor Speedway road course and Watkins Glen International. Cindric and Briscoe, despite their inconsistency and inexperience, must be considered contenders at all four of those tracks.

Both drivers have enjoyed some of the best runs in their NASCAR careers at road courses. Cindric, who was already known for his road racing skills before taking on NASCAR, scored five of his 13 Xfinity victories and one win in the NASCAR Camping World Truck Series on road courses.

The first time Cindric went road racing in Cup was at Circuit of the Americas (COTA) last year. In a race that started under wet conditions, Cindric leapt to the front of the pack and spent the opening laps gapping Cup Series veterans. Mechanical issues prevented him from challenging for the win, but Cindric did rebound at Indianapolis with his first top 10 later that year.

Briscoe came to NASCAR with a sprint car and dirt racing background, but the Indiana native has always shown a knack for road racing. Highlights from his Xfinity career include winning the inaugural races at the Charlotte Motor Speedway ROVAL in 2018 and the Indianapolis road course in 2020. Last year, Briscoe fought through a difficult rookie season and earned only three top 10s, all of them coming on road courses. Those strong finishes did not include the first Cup race at the Indianapolis road course, an event that Briscoe was in position to win before late race contact with Denny Hamlin forced him off the track.

Even this season’s return trip to COTA for the Cup Series was a sign that both drivers will be competitive on road courses. Briscoe ran well for most of the afternoon until a flat tire following the overtime restart dropped him down the running order. Cindric fared better, leading 11 laps and finishing eighth, his best result since Daytona.

No doubt that the No. 2 and No. 14 teams have the remaining road course events circled on their calendars. Those races are going to be the best places for both teams to score wins, or at least more points for the overall standings. Heading into the Coca-Cola 600, Briscoe was 14th in overall points, 59 behind Christopher Bell in 10th. Cindric was 16th overall, nine points behind Briscoe.

Since both drivers have won a race, they are effectively locked into the playoffs. But anyone who finishes the regular season in the top 10 will get extra playoff points to start the postseason. Briscoe and Cindric have banked only six and five playoff points respectively, so any other points that they would be able to score could help them tremendously.

Looking ahead, Cindric and Briscoe’s best hopes are the tracks where they are not at a disadvantage with experience: Road America and Indianapolis. Sonoma and Watkins Glen have been fixtures on the Cup schedule since before the duo was born! But at Road America and Indianapolis, the advantage will go to the drivers who have the extra laps in Xfinity competition. Cindric has three top 10s at Road America in five Xfinity starts and led at least one lap in all of those races.

Briscoe has a top 10 finish in every NASCAR race he has run at Road America (two in Xfinity and one in Cup). And the two drivers who won the two Xfinity races on the Indianapolis road course? Cindric and Briscoe.

In some ways, both drivers have already exceeded expectations for 2022 by winning their first races and reaching the playoffs. But Cindric and Briscoe are probably heading for early eliminations in the playoffs unless they can either improve their consistency or win another race. Improving consistency takes weeks or even months. Winning takes only one race. If Cindric or Briscoe reaches victory lane again, it would bring them a step closer to becoming weekly contenders and make the coming playoffs much more interesting. With four road course races left to run in the regular season, don’t count them out.