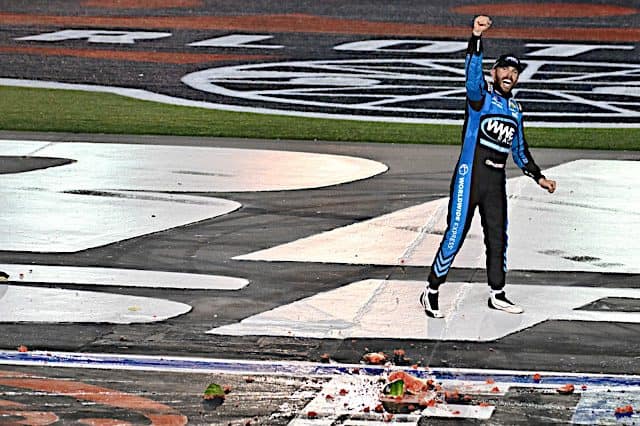 1. Are Ross Chastain and Josh Berry the exception to the rule?

Between Trackhouse Racing Team and JR Motorsports, the desire to have drivers barely old enough to shave being the only ones given prime opportunities to race is being turned on its ear.

This past weekend at Charlotte, 31-year-old Josh Berry continued to make JR Motorsports’ dice roll of giving a short-track ace a chance in quality equipment pay off with his race victory. Ross Chastain, age 29, finds himself second in the NASCAR Cup Series points standings and has two wins to his name this year.

In truth, these two are a throwback to the NASCAR of the 1990s, when guys like Randy Lajoie, Scott Riggs and Jason Keller ground their way to a chance with top Busch Series teams and got their shot, one way or another, in NASCAR’s top division.

NASCAR is a money-driven sport, and convincing an owner to take a chance on a driver that may not be as marketable as a young 20-something is a risk that team owners must consider. But when you have the experience of drivers like Chastain and Berry teaming up with good racecars, it’s worth teams to consider that sometimes, experience brings a value that you cannot put a price tag on, unless that price tag includes experience that better takes care of equipment.

2. Is the mid-race ‘Moment of Remembrance” really necessary?

As the grandson of a late World War II veteran who served in a quartermaster company in Europe, the history of WWII has always fascinated me. I have and still hold the meaning of Memorial Day in high regard. I have memories around Memorial Day growing up with movies like Midway, The Dirty Dozen and The Longest Day being on TV, and I still usually watch some of those movies today. Each Memorial Day, I usually watch a good part of the HBO mini-series Band of Brothers.

The pre-race ceremonies for the Coca-Cola 600 have always been among my favorite pre-race festivities. The solemnness of the moment, from the honoring of the fallen and the playing of “Taps,” does a tremendous job of putting into perspective the meaning of this weekend.

The moment of remembrance during the race, however, is a whole other thing entirely.

Stopping a race midpoint for a moment of silence is disingenuous no matter what the reason is. It comes off as being scripted, and when NASCAR on FOX makes it a point to emblazon the Honor And Remember grass logo across the screen, it really has the air to a new fan of the TV networks being paid to force fans watching one of the sport’s marquee races to engage in forced patriotism.

Pre-race is an awesome time with all of the festivities to honor and remember those who gave their lives for our freedoms. Halting the race for a made-for-TV tribute, however, is not.

3. Is it time for a victory lap for the Next Gen car?

You have to be really careful about labeling something as the “best ever.”

Sunday night’s Coca-Cola 600 stood out for many reasons. But chief among them is this: There were many things being talked about on Monday morning, and none of them was the lack of excitement from NASCAR’s longest race.

No matter the reason, be it the new car or how resin was applied to the racing surface, Sunday night gave us the best 600-miler in quite some time — no small feat given the fact that the longer race at times strings the field out.

Before this season, fans almost dreaded most 1.5-mile races. The new car has mostly fixed that issue.

It may not even be June yet, but it’s time to give credit where credit is due and call this new car a rousing success.

Whatever your personal feelings about the driver of the No. 23 car, Bubba Wallace, may be, this much is clear: The pit crew for the No. 23 Toyota for 23XI Racing continues to find ways to misstep.

The proverbial band aid was ripped off at Kansas, when Wallace rallied twice from a pair of pit-road blunders to finish 10th. Had even one of those not happened, odds are good that he finishes in the top five, at least.

Then came Sunday night in Charlotte. Even though the NASCAR on FOX broadcast inexplicably relayed no info, Wallace had to park his car after his team appeared to miscalculate the damaged vehicle policy clock.

. @bobpockrass and I spoke to Bootie Barker, Bubba Wallace's crew chief, on the No. 23 team failing to clear the DVP clock before it expired, sending Wallace to the garage despite having only minimal damage. pic.twitter.com/aQJLhcatR1

Give credit where credit is due. The 23 crew did at one point gain multiple spots in the pits on Sunday night. But when you continually have the opposite happen and then miscalculate the damaged vehicle policy clock, the question has to be asked: At what point does the plug get pulled on who goes to track each weekend on Bubba Wallace’s car?

5. Is NASCAR on FOX out of broadcaster ideas?

NASCAR on FOX has given fans variety in rotating a special guest third announcer this season, using a mix including Matt Kenseth, Danica Patrick and Tony Stewart to provide a fresh perspective.

Late during Sunday night’s race, it was announced that the special guest announcer for St. Louis will be Michael Waltrip.

This is nothing against Waltrip, but if you are using a rotating announcer for a fresh perspective, slotting him in that role is like swinging and missing at a pitch thrown across the Mississippi River by Cardinals pitcher Adam Wainwright.

If you watch the NASCAR Camping World Truck Series races, you get a heavy dose of Michael Waltrip. The same goes for the pre-race coverage with the grid walk, for those who are into that sort of thing.

With the race being in Missouri (OK, across the river from it), the dream scenario would have been an appearance by Ken Schrader or Carl Edwards stunning us all by coming to the forefront. Thankfully, Missourian Kenny Wallace will drop by the booth during stage two at Worldwide Technology Speedway, and Kenny Wallace and Clint Bowyer in the same booth should be quite the event to witness given both of their unbridled enthusiasm.

For Sonoma Raceway on June 12, @TonyStewart returns to the @NASCARonFOX booth to wrap up the @FOXSports portion of the #NASCAR Cup Series schedule. pic.twitter.com/n6PTLLEcOU

Will that salvage having a very familiar face in the booth in Waltrip? We’ll see.

I find I can’t watch the truck races because it’s too much Mikey for me to take. Guess I will have to mute the race in order to watch. really BAD decision by Fox.

Mute and put on the MRN broadcast. You can also try and sync the audio and race up at the green flag.

totally with you there, Sally. Mikey in the booth means I tune out.

I suspect that if Faux were to do a fan poll. The results would be not to have a Waltrip, (any Waltrip) within a hundred miles of the broadcast. I’m not a big fan of Rutledge Wood, but I’d take him over a Waltrip any day.

I lost a family member in Vietnam and have 2 friends that have never been the same since as well. There is a time when thoughtful reflection seems to honor those who have paid the biggest price. But stopping a race in the middle seems like an attempt to win race fans, not to pay respect. In fact, it seems like a publicity stunt and not an expression of genuine respect. I have mixed feelings about the names on the windshields. While it does personalize the individuals briefly, what about the other thousands that weren’t selected? The armed services are the ultimate “team sport” in which each other’s lives depend on that team work. The pre-race ceremonies at both Indy and Charlotte are very well done, however. But Charlotte, pull it back just a little.

I have also had millitary members in my family, but I don’t feel like we really need the halfway break. Like another commenter said below, it’s the only thing about NASCAR’s Memorial Day festivities that feels fake and made for business, along with disrupting the flow of the race. Keep all the other great tributes, but the stoppage at halfway feels like it was made for newspaper headlines and as promotional material, not out of respect for the fallen.

Fox has been out of ideas for nearly a decade. It’s broadcasts are as stale as 50 year old bread. They need to shake things up and start by getting rid of Artie Kempner, the man behind the cartoon-like approach Fox brings to the broadcast. Maybe he’s the genius responsible for the new-for-this-season ‘coming green’ banner, one of the most ridiculous things I’ve ever seen. Where in holy hell did they pick that up? Sounds like something from a environmentalist adult film.

Fox came up with Digger and the Waltrips so that tells you all you need to know about how they are trying to treat the telecasts.