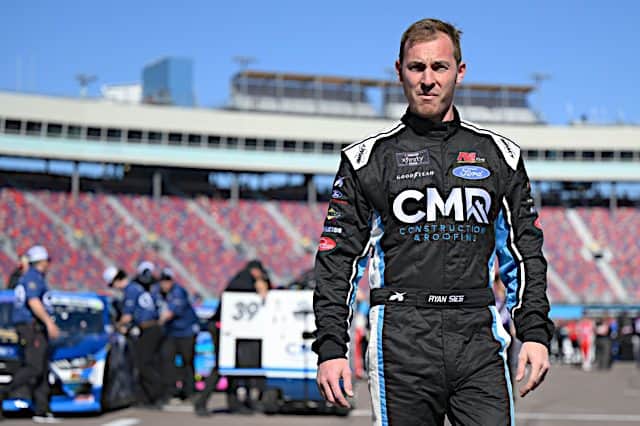 After two finishes of 32nd or worse and collecting seven points over the past two races, Ryan Sieg transitions into the second half of the regular season back on his heels.

Two wrecks where he was an innocent bystander have dropped Sieg three positions in the past two weeks, dealing a significant blow to his attempt to make the 2022 NASCAR Xfinity Series Playoffs.

At Texas Motor Speedway, Joe Graf Jr. bobbled into teammate David Starr, who struck Sieg’s left rear and sent him around and into the wall. Then this past weekend at Charlotte Motor Speedway, Sieg was pinched between Austin Dillon and Stefan Parsons when Dillon slowed for a flat tire. Both cars were left junked, and depending on who you ask, his drop in position within the championship was even more detrimental.

In the first 11 races of the season, Sieg finished worse than 11th only once. That was at Las Vegas Motor Speedway, when he crashed attempting to repay Ty Gibbs early in the race. He sat ninth in points.

Not only have the crashes played a heavy role in his slip in the points, but the competition has stepped up their game as well. Austin Hill, Daniel Hemric and Landon Cassill have all surpassed Sieg in the standings. Hill has finished ninth, fifth and 14th in the past three races, capturing 91 total points. Hemric has scored 92 points in the same period with 10th, 11th and sixth finishes. Cassill suffered a mechanical issue at Charlotte, relegating him to a 29th-place finish but posted 10th at Texas and a sixth at Darlington Raceway, accumulating 69 points.

After Darlington, Sieg had just a 31-point advantage over 12th-place Hemric and a 53-point cushion over 13th-place Anthony Alfredo. Now he’s 41 points from eighth place but has a 48-point gap between him and Alfredo in 13th.

There is, however, primarily good news for Sieg: He has repeatedly demonstrated he has the speed capable of running inside the top 12. The only finishes he has outside are ones he has failed to finish. The bad news was just outlined above — the “Power 12” competition is getting stronger and more consistent. With drivers and teams like Cassill and Hemric turning their seasons around, their more robust finishes will impact Sieg.

Over the next 13 races, Sieg will encounter tracks he has success at and, based on the speed the RSS Racing group has shown, should be a bright light for him and those cheering him on.

Kansas Speedway is the penultimate race of the Xfinity Series’ regular season, and it is statistically Sieg’s best track. His career average finish is 13.9, but over the past five races, his average there is 6.0. He hasn’t finished outside the top 10 there since 2017.

Sieg has a 14.8 average finish over his career at Darlington and, similar to Kansas, hasn’t finished worse than 11th in the past five races. He currently has an 8.2 average finish in that five-race span.

All the rest of the ovals are ones he hasn’t performed well at but not always outright poorly either. His performances in 2022 have been so consistent that it’s hard to imagine he would suddenly start to fall off so dramatically. The past two races at Auto Club Speedway, including the one earlier this year, were top-10 finishes. Despite never finishing inside the top 10 at Michigan International Speedway, his average finish at Auto Club’s sister track is better.

Then finally, there is Daytona International Speedway, and that is just a lottery of a race. The positives are that there are not too many superspeedway races where Sieg isn’t found in the first handful of rows. With Atlanta now being a superspeedway-like racetrack, Sieg has two lottery opportunities for victory.

The unfortunate thing for Sieg and anyone rooting for him to make the playoffs is that there are four road courses in the next 13 races. Traditionally, road courses have not been the best place for Sieg to make ground in the points. The first road course is Portland International Raceway this weekend (June 4), and Sieg, along with most of the field, has never visited PIR in any capacity.

Road America is July 2, and while Sieg has never started inside the top 15, he does have three top-15 finishes, including a ninth-place finish in 2020. Sieg’s two bouts with the Indianapolis road course haven’t gone great, with finishes of 17th and 32nd in 2020 and 2021, respectively. And Watkins Glen International is even bleaker than Indy, with zero top-10 finishes and five finishes of 23rd or worse in seven starts.

In 32 starts on seven different road courses, Sieg has only two top-10 finishes. His best road course is the now-inactive Xfinity circuit of the Mid-Ohio Sports Car Course. His 17.6 average finish in seven starts there makes Mid-Ohio his 11th-best track from an average finish standpoint. Conversely, the Indy road course, Watkins Glen and the Charlotte Motor Speedway ROVAL are his three worst tracks.

If there is one bright spot for the upcoming road courses, Sieg finished 11th at Circuit of the Americas earlier this season. But unlike his performances on the ovals, that is a small sample size to draw any conclusions.

Yet Sieg is performing better across the board. Maybe road courses will continue to see improvement. Sieg has, however, had seasons where his performances on road courses were better, such as in 2020. His four road course finishes that year were 17th (Indianapolis road course), ninth (Road America), 11th (Daytona road course) and 21st (Charlotte ROVAL). But 2020 also didn’t include practice or qualifying, which may skew that data for some.

A final point that serves as a circumstantial advantage is that following this week’s race at Portland, the Xfinity Series is off for two weeks before returning to action on June 25 at Nashville Superspeedway. This will serve as time for RSS Racing to rebuild and replace the two crashed cars from Texas and Charlotte over the past weeks.

Despite the past numbers at the upcoming tracks, I doubt Sieg’s speed streak will end during the summer. This has been the best start for Sieg in his career, and the only scuffs on the paint are three DNFs — two of which were not of his making. While drivers like Hill, Hemric and Cassill may have surpassed Sieg in the points, that by no means indicates that Sieg’s quest to point his way into the playoffs safely has come to an end.

The past two weeks may have complicated things, but Sieg and his team have brought fast cars to the track every week. It may not be outright winning speed, but they’ve had the speed to point their way into the playoffs with ease — so long as the bad days ahead are limited.