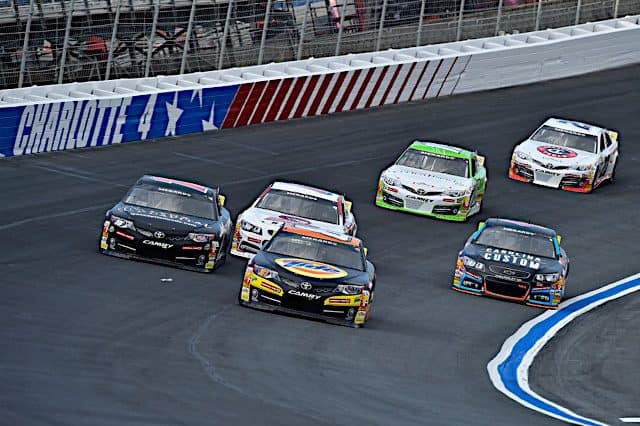 The ARCA Menards Series kicked off an absolutely great weekend of racing Friday evening (May 27) at Charlotte Motor Speedway.

On the entry list was a driver who one would have expected to dominate the General Tire 150 who is not a regular competitor. He races in the NASCAR Xfinity Series for Joe Gibbs Racing and raced for that team that evening in one of the best-funded cars on the racetrack. His name is Brandon Jones.

Jones going on to win the race with the equipment he had on paper seemed expected. Of course, a Gibbs-funded entry would win an ARCA race. It likely has more money, resources, and testing than the regulars on the circuit, so winning was going to be a walk in the park, right? Not at all, it was the complete opposite.

ARCA tends to get a bad reputation with the on-track product at times but what we saw Friday was great racing between the drivers who have been running up front this season. Early on, it appeared Rev Racing would once again find itself in victory lane, this time with Rajah Caruth, who led a lot and by a lot early. His teammate, Nick Sanchez, was able to race Caruth after some cautions, taking advantage of restarts and a bunched-up field. Later on, another caution came out when Corey Heim appeared to race off into the sunset.

With the laps winding down, Jones was in the fourth position. He had been near the front during the race but never out front; this is where the talent coming up in ARCA really shines. Jones had to fight his way to win the race and it wasn’t an easy path. Sanchez and Caruth were battling for second when Jones was able to eventually pass them thanks to some cautions and adjustments to the car. Caruth was battling a loose car in the last bit of the race, sliding and saving the car multiple times, and eventually finished third. Jones then ran down the Venturini Motorsports driver to pass for the lead on the high line while Heim got loose under and slid in coming out of the corner. Once in the lead, Jones drove off with an eight-second gap by the race end between himself and Heim capturing the win in the No. 81 Toyota.

In his post-race press conference, Jones was asked about the perspective of fans who may not understand the challenge and just how hard it is to come down from a higher series to race against who they would consider the easier competition.

“It was hard to pass them once we got back to fourth or fifth position, dirty air affected our balance a bunch,” Jones said. “Those guys were tough, I didn’t have anything for them early on in the race. We made an adjustment at the halfway point and I thought that was most definitely the right direction to go and we became the dominant car at that point.”

ARCA has many future stars of NASCAR waiting in its wings to move up and make their name brighter in the sport. Whenever an accomplished driver comes down to race, you get a sense of the talent on the track every race weekend in the series when you see them battling and fighting their way to the front with the circuit’s regulars.

ARCA teams will compete next at Iowa Speedway on Saturday, June 11. Coverage will air at 9 p.m. ET on MAVTV.