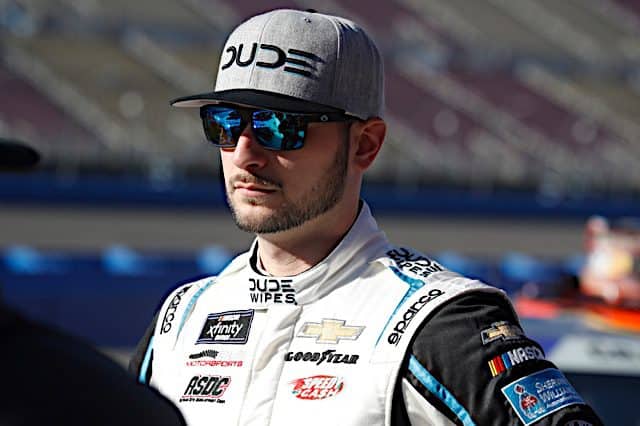 With heavy rain pouring on the track, NASCAR cancelled the final round of qualifying for the Xfinity Series’ debut race at Portland International Raceway. That left Anthony Alfredo – who had the fastest overall lap in the first round with a speed of 93.229 mph – as the polesitter, his first in the Xfinity Series.

Austin Hill, who qualified in Group A along with Alfredo, posted the second-fastest time of the session and will start on the outside of the front row for tomorrow’s (June 4) race.

Ty Gibbs, the fastest qualifier in Group B, will start sixth with Sheldon Creed seventh after being the fastest in practice earlier in the afternoon.

The first round of qualifying had a handful of harmful spins, but the biggest incident came when Mosack made contact with Jesse Iwuji, sending Iwuji around. While trying to avoid Iwuji’s stopped car, Mason Filippi went on a wild spin through the grass.

With 38 entries, every driver qualified for tomorrow’s race.

The Pacific Office Automation 147 will take place on Saturday, June 4 at 4:30 p.m. ET, with TV coverage provided by FOX Sports 1.