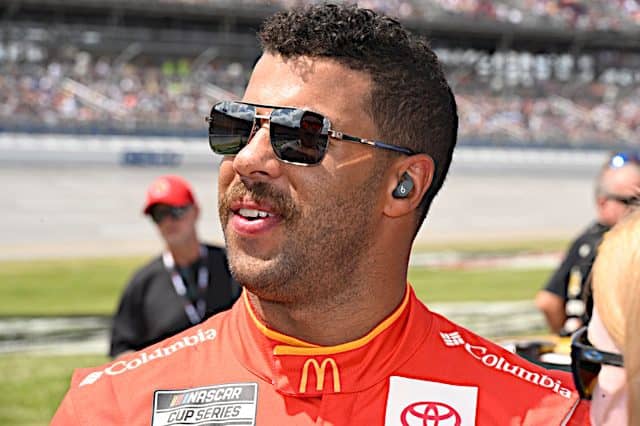 Gateway is a 1.25-mile oval that is unlike any other racetrack, built with long straightaways and tighter corners in turns 1 and 2 than in 3 and 4. Shape-wise, it’s a little bit similar to Darlington Raceway, but the racing will be closer to Phoenix Raceway.

The event won’t be as long as others on the circuit — just 240 laps — so dominators may not be needed as much as ones that start near the back but finish up front. It doesn’t mean you shouldn’t play the more expensive drivers; after all, this place does race like Phoenix, which had some lap leaders in the perfect lineup back in March (according to LineStar). Also keep in mind recent comments by Ryan Blaney and others about how difficult it could be to pass this weekend; drivers with a good qualifying effort should be top-of-mind for your roster.

See also
Fire on Fridays: Is Anyone Really a Favorite at Gateway?

Before I share the drivers I’m thinking about having in my DraftKings lineups, let’s review results from the Coca-Cola 600:

Though he had a strong car and led 86 laps, Chase Elliott retired very early from the race, around the halfway mark. Other drivers with lower fantasy scores were Austin Dillon, who crashed out while trying to win just before the first white flag waved, and Chris Buescher, who flipped his car in a nasty wreck on the tri-oval. This race almost seemed like it was at a plate track or Atlanta Motor Speedway rather than the 1.5-mile oval of Charlotte Motor Speedway.

Note: The following drivers are part of a sample NASCAR DraftKings lineup; you can use this info to make your own. Stats in bold are for past Camping World Truck and/or Xfinity series races.

Chastain finally broke the $10,000 range on DraftKings this week after he led 153 laps and recorded 66 fastest laps at Charlotte last week. I’m not sure exactly why he’s priced this high, though, since that was the first time he broke 100 fantasy points on DraftKings.

Perhaps it’s because he won at WWT Raceway recently, in 2019. Though he led just 21 laps, it’s still a win, and one that came within the past three years. Chastain also won last week’s Truck race at Charlotte.

This year in Cup, he’s won twice and has seven top-five and eight top-10 finishes. At Phoenix, he finished runner up to Chase Briscoe after starting 17th. Though he didn’t tally any fastest laps or laps led in that one, he’s done that in many others, including Dover Motor Speedway and Las Vegas Motor Speedway. Plus, he posted the fifth-fastest 10-lap average in practice on Friday. Look for him to be a contender once again.

Ryan Blaney’s lone start at Gateway came in 2014 in the Truck Series; he started 14th and finished seventh. But he showed tremendous speed during Friday’s practice session, as did his other Team Penske teammates. Blaney had the quickest five-lap average and was second to Joey Logano in single lap times. He and Logano could both be out front for several laps, as long as they don’t run into trouble.

So far in 2022, Blaney has four top fives and six top 10s, not including his All-Star Race victory at Texas Motor Speedway. Additionally, he dominated at the desert racetrack, leading 143 circuits en route to a fourth place at Phoenix. This weekend could be the one where the 28-year-old nabs his first points win of the season.

Logano could give Blaney (and everyone else) a run for their money, as he was quickest in Friday’s practice in most categories: single lap, 10-lap average and 15-lap average. It’s this kind of speed a driver needs to be fast right out of the gate. If Logano qualifies up front, he’ll definitely lead laps and give you bonus fantasy points on DraftKings.

His lone race at Gateway was a runner-up back in 2008, when Logano was just a teenager. But even though he doesn’t have a lot of experience there, he does have a win in his pocket at Darlington last month. The Connecticut native also has four top fives and six top 10s this season, including an eighth at Phoenix and a second at Martinsville Speedway.

Logano could produce a big DraftKings score this weekend as long as he doesn’t encounter trouble.

It’s been a while since Stenhouse competed at Gateway. However, he’s been on quite a hot streak as of late, earning four straight top-10 results. Stenhouse was second at Dover, eighth at Darlington and Kansas, then seventh in the Coca-Cola 600. The good thing about this streak is he usually doesn’t start inside the top 10, providing a plethora of position differential bonuses for your roster.

Those bonus fantasy points on DraftKings sure do add up. Stenhouse has had four consecutive scores of 55 or better on DraftKings (not counting the All-Star Race or Open). Let’s hope he can keep up this high-scoring trend on Sunday at Gateway.

See also
NASCAR 101: Cup Drivers With Past Success at Gateway

All of Aric Almirola’s Truck races at Gateway were from 2006-2010 when he earned two 10th places and a fourth (2009). That’s a long time ago, and probably doesn’t really apply to this week (especially considering he’s running the new Next Gen chassis). But Almirola was fast in practice, posting the seventh-quickest single lap time and 12th-best average in 10 consecutive laps.

Unfortunately, the No. 10 Stewart-Haas Racing driver hasn’t broken the top 10 since Martinsville back in April, when he finished eighth. Even that wasn’t as high of a fantasy score due to his starting position. Almirola was sixth at Las Vegas Speedway and Auto Club Speedway, but that was several months ago. He could use a bounce back, and Gateway just might be the place to do it.

Bubba Wallace won at Gateway in the Truck Series in 2014 after leading 85 laps. I know the trucks are vastly different from these Next Gen cars, so let’s take a look at his results this season.

At Kansas, Wallace gained 14 positions to 10th place, earning his first top 10 since the Daytona 500. A couple of other races where he advanced his position were Auto Club (34th to 19th) and Martinsville (21st to 16th). I believe that Kansas was a turning point for him and his team, and if the No. 23 Toyota driver can just move up a few positions, he’ll be just fine on DraftKings.

I can only think of one reason.

I guess Stubby’s asleep so no thumbs down.

Joy was close, 26th, maybe next time pick a racer. Shove him down our throat some more, I enjoy the laugh 😂