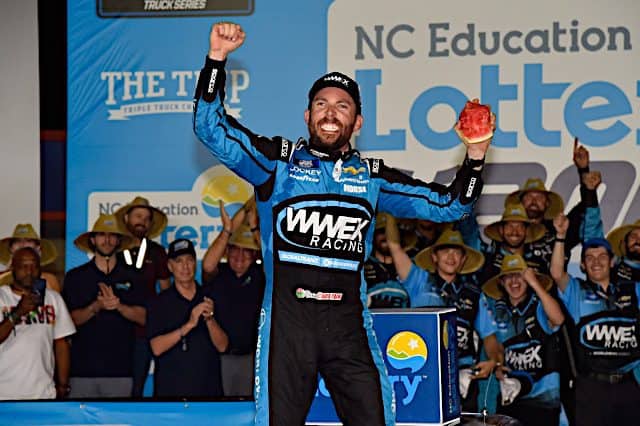 It’s taken decades, but the NASCAR Cup Series is finally visiting World Wide Technology Raceway at Gateway this weekend, the inaugural race for the series at a track well known for its hosting of racing over the years, from stock cars to open-wheel events.

That doesn’t mean the 36-car Cup field doesn’t have its share of past experience at the track, with some drivers gaining experience via the NASCAR Xfinity, NASCAR Camping World Truck and/or ARCA Menards series ranks.

But does that matter one bit? Can anyone profess to having a leg up on the rest of the field come Sunday, June 5?

Doubtful. But let’s look at the evidence to the contrary.

A total of 24 of the 36 entered drivers have made at least one start in either the Xfinity, Truck or ARCA series at Gateway. Some did so in the past few years, a byproduct of the Truck Series running at the track since 2014 (and from 1998 to 2010 before that). Others have been to the track, albeit a decade or more ago, whether it was in their early days as a Truck competitor or when the Xfinity Series went there from 1998 to 2010. Two more — Harrison Burton and Michael McDowell — raced there during ARCA’s various stints at the speedway, which most recently occurred in 2018.

There’s quite the share of former winners entered Sunday as a result — nine in all, a fourth of the field.

Kevin Harvick leads the pack. He’s the only entered driver to boast wins in two different series; he visited victory lane in 2000 and 2001 during his full-time Xfinity exploits for Richard Childress Racing, and he won the Truck Series’ 2010 event while driving for his own team.

The other eight have one win in each series. Kyle Busch, Brad Keselowski and Martin Truex Jr. were victorious in Xfinity before the series departed the track in 2010. And in Trucks, Christopher Bell, Bubba Wallace, Ross Chastain, Cole Custer and Justin Haley have all scored victories, each coming since the series returned to Gateway starting in 2014.

Others sans wins but with strong past results include Todd Gilliland and his pair of runner-up Truck results, Chase Briscoe‘s second-place run in his lone Gateway start in Trucks, Joey Logano‘s Xfinity second-place finish and a third for Denny Hamlin in Xfinity. Burton and McDowell also each have one ARCA start at the track, both resulting in third-place finishes.

But chances are their previous laps around the track won’t matter much in the long run.

Because it’s the Next Gen, right? So many words have been written, tweets typed, podcasts recorded, in-person arguments had about this car and its pros and cons during its inaugural season. And one of the certain things folks seem to often be able to agree on is that there is no certainty when the series visits a new-to-the-new-car track. The car could perform the same way its predecessor did. It could be completely different.

And then, of course, there’s no baseline with Gateway anyway, since it’s the first time the series has been to the track at all. Its closest cousin is Darlington Raceway, which the series has already visited in 2022, to fairly positive reviews. But there’s no guarantee Gateway will race exactly the same as Darlington, instead becoming its own animal entirely.

See also
Chris Buescher Out at Gateway Due to COVID-19, Zane Smith Subbing

Even if you’re of the opinion that someone’s past Gateway experience in other series can help them this weekend … I dunno, can it really? If we’re talking straight-up cars, Burton’s got the most recent start via his 2018 ARCA appearance; everyone else raced at the track in such a vehicle in 2010 and before. Even if you were someone like Kyle Busch, who had the track fairly figured out with finishes of first, fifth and eighth in three starts, those were practically a lifetime ago. Maybe he’ll be back to his old self by race’s end, but will it really come that easily right off the bat?

And the guys with recent Truck experience? Sure, but they’re still trucks, notoriously quite different to drive and sometimes not even a marker of what someone will be able to do in a stock car down the line. Can you really look at Haley’s 2018 win in the series and say it’s gonna translate to Cup and the Next Gen car, even if his instincts having run the track in recent years are still fresh? Haley’s impressed here and there in his first full season with Kaulig Racing in the Cup Series, but who knows where he’ll run Sunday.

If there’s anyone with past Gateway experience who one can bet on, though, it’s probably Chastain. Partially because it’s unwise to bet against Chastain at any track these days anyway, but also because he’s a fairly recent winner at the track — 2019 — and with Niece Motorsports, a team with less resources (both then and now) than some of the other Truck frontrunners. And to boot, he had a strong run going at Darlington this year before a late-race wreck.

All this makes Gateway a can’t-miss watch this weekend — not that it wasn’t already going to be, given the novelty of the track on the Cup schedule. There are plenty of unknowns, drivers who’ll need to shake off some rust to remember how to get around Gateway, others who’ve never been there at all.

Hell, watch Kyle Larson, who’s never been at the track in a NASCAR national series or in ARCA in his life, win the whole thing. Seems like anything could happen.

I look for Gateway to race more like Loudon than any other track. Flat oval that’s only .25 miles longer. Toyotas will probably be the strongest of the bunch, look for Bubba and Bell to be dark horse picks.

I’m watching for bubba to mess up early.

if rooting for drivers to do poorly is what you watch NASCAR for, you need to find a different sport and have a more positive outlook on life… rooting for athletes or people to fail seems like a miserable lifestyle….