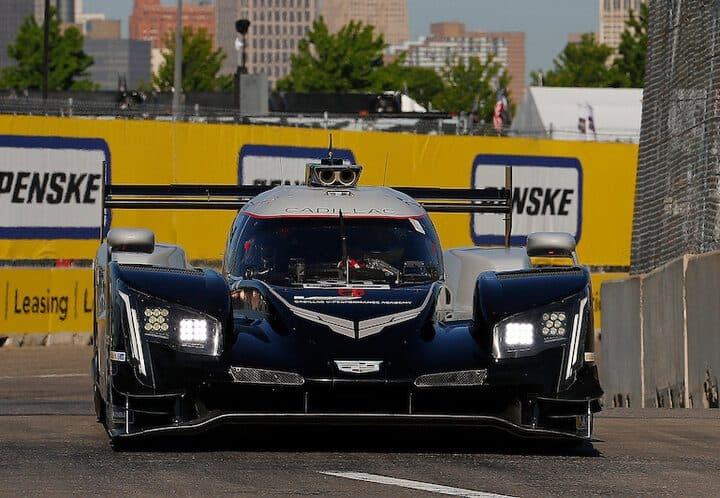 Chip Ganassi Racing’s Sebastien Bourdais put in a lap at 106.674 mph with a few minutes remaining in the second practice session to go fastest overall in IMSA WeatherTech SportsCar Championship practice Friday (June 3) at The Raceway at Belle Isle.

IMSA WeatherTech SportsCar Championship teams were on the track bright and early at 8 a.m. ET for 90 minutes of practice.  At the end of the session, Chip Ganassi Racing’s Earl Bamber was fastest with a lap at 105.515 mph around the 2.35-mile street course.

Bamber’s lap was .146 seconds quicker than the Acura of Wayne Taylor Racing’s Ricky Taylor.  Meyer Shank Racing with Curb-Agajanian’s Oliver Jarvis was third, then Olivier Pla in his first official practice session in the Action Express Racing Cadillac.  Bourdais was fifth in the second Ganassi entry.

Unfortunately, The Raceway at Belle Isle has been known in the past for surface issues.  Concrete problems in turn 1 resulted in a brief red flag for track maintenance.  Once the issue was taken care of, the session resumed.

In the GTD class, Turner Motorsport’s Bill Auberlen and HTP Winward Motorsport’s Philip Ellis were fast early on.  However, it was the Mercedes of Team Korthoff Motorsports’ Mike Skeen that ended up topping the class with a lap at 93.214 mph that was set with 27 minutes remaining in the session.

Given that The Raceway at Belle Isle is a street course, there were a number of drivers that ended up going straight into runoff during the session.  Taylor did it late in the session as did Skeen.  Paul Miller Racing’s Bryan Sellers did it at the beginning as well.

The afternoon practice was a two-hour affair, run without interruption.  Alex Lynn in the No. 02 Cadillac was fastest for the vast majority of the session.  However, Bourdais was able to put down his quick time with five minutes remaining.  That held up to be fastest.

Bourdais was two-tenths of a second faster than Taylor.  Lynn was third quickest, then Tom Blomqvist in the No. 60 Acura.  JDC-Miller MotorSports’ Tristan Vautier was fifth in his Cadillac.

In GTD, Kyle Kirkwood getting a chance in a sprint race appears to be working out so far for VasserSullivan.  The NTT IndyCar Series rookie was fastest in class with a lap at 94.007 mph.

Kirkwood’s lap was a mere seven-thousandths of a second faster than a rare tie for second.  Skeen and Heylen clocked in the same exact (exactly 90 seconds).  Since Skeen set it first, he gets the position.  VasserSullivan’s Frankie Montecalvo was fourth fastest, then DeAngelis.

Qualifying for the Chevrolet Sports Car Classic is scheduled for 5:25 p.m. ET Friday afternoon.  The session will be streamed live at IMSA.com.