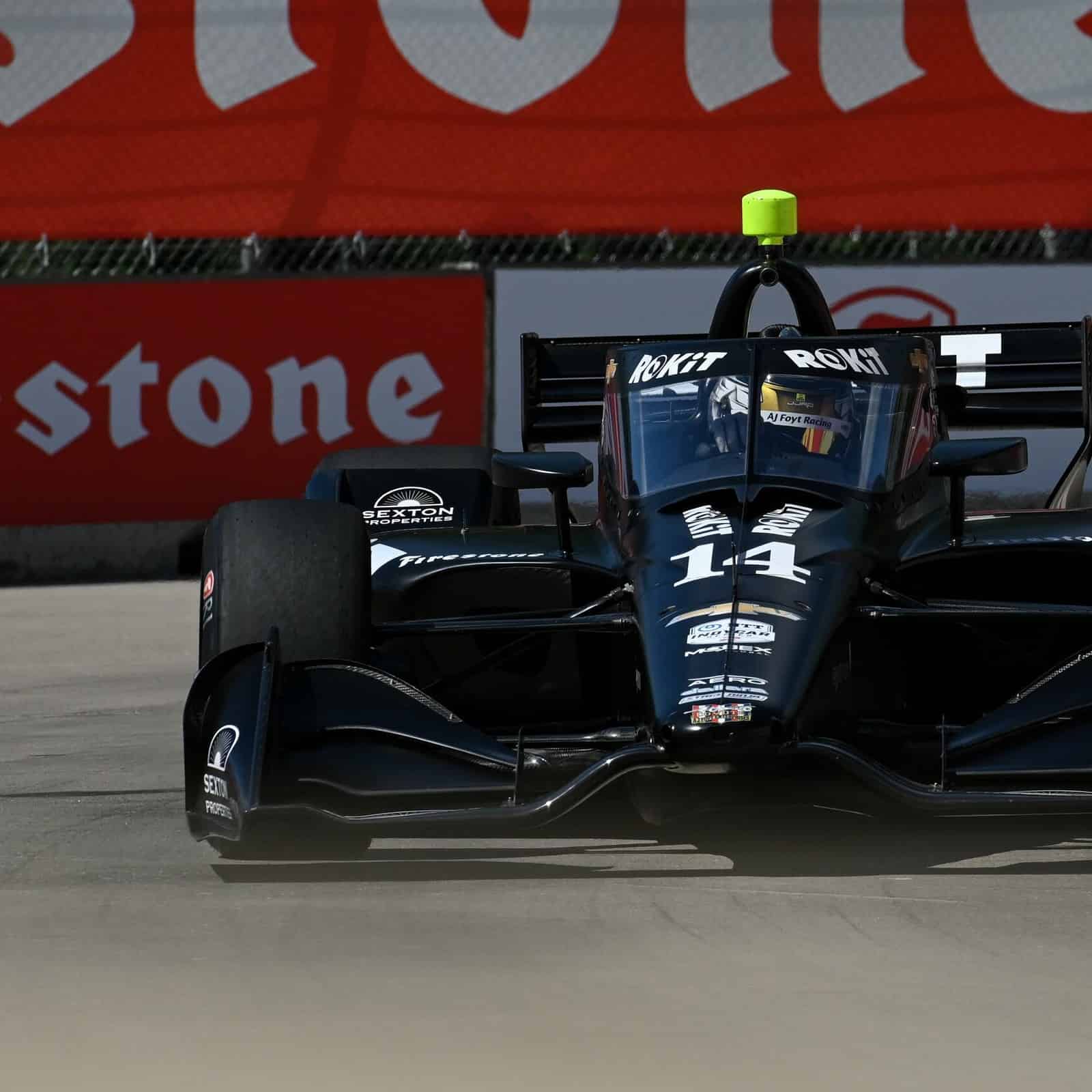 DETROIT — Kyle Kirkwood‘s Friday’s (June 3) at the final race weekend at Belle Isle has gotten off to a tremendous start.

Kirkwood led the opening practice session for the NTT IndyCar Series, turning a fastest lap of 1 minute, 16.1345 seconds around the 13-turn, 2.35 mile circuit. The Florida native averaged 111.119 mph in the No. 14 A. J. Foyt Racing Chevrolet.

The nearly-45 minute session was the Florida native’s first laps at Belle Isle in an Indy car, one year after sweeping the Indy Lights races at Belle Isle. After moving to IndyCar, Kirkwood has completed two races on street circuits, turning in a best finish of 10th at Long Beach. With the Indy Lights car feeling pretty similar to the Indy car, Kirkwood has spent the first part of the season getting acclimated to how an Indy car handles street circuits.

“I’d say the Indy car through the high speed stuff is quite a lot heavier, but through the low speed it feels very similar,” Kirkwood said. “It’s nice having the dampers that we have in IndyCar, all the damper development definitely helps with the kickback and what not so I wouldn’t say it’s any more physical, it’s just the high speed corners are a bit heavier.”

Kirkwood is doing double duty this weekend as he is racing for Vasser Sullivan Racing in the IMSA WeatherTech SportsCar Championship. The Lexus RC F GT3 in the GTD class has driver aids like traction control, power steering and anti-lock braking, making the Lexus feel like a road car compared to his Indy car.

“It’s beneficial just to get track time,” Kirkwood said. “Obviously learned the track a little bit quicker. Everyone has been here for the most part. But at least for this year I got a lot more laps than the rest of the guys to start off the session.”

Later in Friday afternoon’s running, Kirkwood put the No. 17 Lexus on pole position for Saturday’s IMSA race in the GTD class with a fastest lap of 1 minute, 29.096 seconds. That race will be 100 minutes`

Kirkwood fell in love with the Belle Isle circuit last year, winning both Indy Lights races en route to his third championship on the Road to Indy. Last year he won the title with Andretti Autosport and it was confirmed that Kirkwood will rejoin the team in 2023 to drive the No. 27 Honda that will be vacated at years’ end by Alexander Rossi.

Kirkwood maintains that the focus is still on this season and accomplishing the best results he can before moving on to a familiar team.

“For me it’s really just not a focal point at all,” Kirkwood said. “To me it hasn’t changed anything. It’s been, yeah, some time now that we’ve actually did it.

“It’s been the same thing. It’s the same goal always. We’ve got 11 races left. Right now we’re doing solid. Obviously the focus is still with A.J. Foyt Racing and the Ro-Kit Chevrolet because all I want to do is win for the team because they worked really hard for it.”

After using Belle Isle for the greater part of the last 30 years, IndyCar will move the Detroit race in 2023 to a new downtown circuit using part of the old circuit that used to host Formula 1 from 1982-1988 and and IndyCar from 1989-1991.