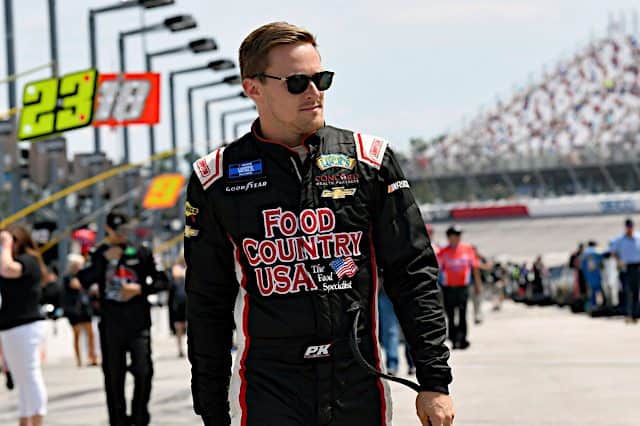 MADISON, Ill. – Parker Kligerman found out Wednesday afternoon that he was going to be driving for Rick Ware Racing this weekend at World Wide Technology Raceway. Having never driven the Next Gen car prior to Friday (June 3), he knew that it was going to be an uphill battle. However, things got quite a bit tougher when an electrical fire started, ending his session early.

A big fire in the No. 15 machine for Parker Kligerman and Rick Ware Racing at WWT Raceway. https://t.co/dOnNS78yo7 pic.twitter.com/F2QLtpUuKh

“We had an electrical fire and I hate it for the Rick Ware Racing guys,” Kligerman told Frontstretch. “They work really hard and they’re doing a great job bringing a competitive racecar to the racetrack. Now, we basically have to build an entire backup car in two days. I don’t get any laps, so it’s all going to be on me in the race.”

Kligerman is unsure as to what started the fire, but does have a notion of where it started.

“It seemed like [the fire] was coming from the left front [corner of the car],” Kligerman said. “Then, it engulfed the engine compartment, then it seemed like there was some electrical wires down there that was on fire as well. I really don’t know what caused it for sure, it’ll be a while before we can diagnose it and run through it all. It’s really unfortunate because it was a really good car.”

Prior to the fire, Kligerman had set a lap at 129.225 mph, good only for 35th fastest. However, he only got four laps on the track before the fire. That time was spent more or less getting used to the new car since he’d never tested it.

As for how Kligerman got the ride for this weekend, it’s centered upon his work as a pit reporter with NBC Sports on IMSA broadcasts. That put him in the position to spend some time around Rick Ware.

“Rick [Ware] and I talked at length for the first time in the IMSA paddock,” Kligerman said. “With the Next Gen car and the investment that Rick Ware Racing has made in their program this year and knowing as a driver that it would be great to jump into one of these things. He basically asked me, ‘hey, would you be interested [at Mid-Ohio]?’ I said ‘sure, give me a call.’

“The team had a driver mix-up this week and Rick gave me a call Tuesday saying ‘if you’re interested, we’d love to have you come and do it,'” Kligerman continued. “Why not? Let’s go drive a Next Gen. I appreciate the opportunity to get in this car.”

Kligerman told Frontstretch that he felt confident that there was a lot more pace in the car, a minimum of one second and as much as 1.2 seconds. Such a pace would have put Kligerman ahead of teammate Cody Ware‘s pace and on the tail of drivers such as Todd Gilliland. The team would have something to build upon for both qualifying Saturday and Sunday’s 300-mile race.

Unfortunately, the building-up of Rick Ware Racing’s backup car will be a long one. As of this writing, Kligerman’s primary car is on jackstands in the garage with white and purple fire suppressant all over it. It is a rather pungent piece of machinery that the Rick Ware Racing team has had to strip certain things out of it to put in the backup car, like Kligerman’s seat. The backup car is right next to it as the work continues. The team will likely not qualify Saturday morning and start at the rear of the field Sunday.