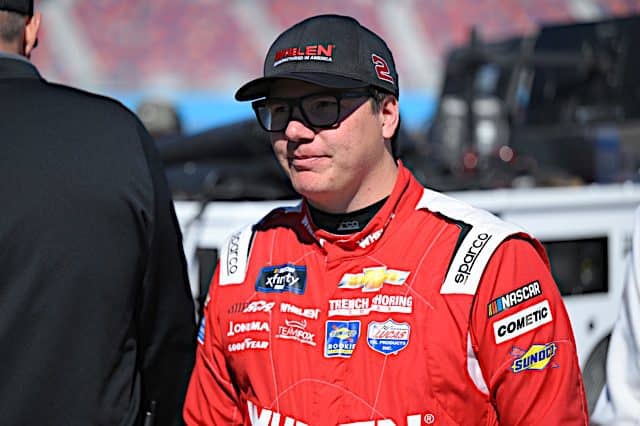 Sheldon Creed recorded the fastest lap in the NASCAR Xfinity Series’ debut — and only planned — practice at Portland International Raceway with a speed of 79.975 mph.

For a practice session that began in wet conditions, the closing minutes saw Creed, Ty Gibbs, AJ Allmendinger and Connor Mosack take turns at the top of the speed charts before Creed prevailed when the clock hit zero.

Making his Xfinity debut for Joe Gibbs Racing, Mosack was the ninth fastest in practice, while Spencer Pumpelly completed the top 10.

The practice session was halted for two incidents, the first of which saw Noah Gragson crash. The No. 9 team will go to a backup car for tomorrow’s race.

Heavy damage to the front of Noah Gragson’s car.#NASCAR pic.twitter.com/7HbLsxSiJn

The second incident involved Joe Graf Jr., as the hood of his No. 07 car fell off and became attached to the door.

Bold way to carry the hood. We’ll see if that works out for him. pic.twitter.com/sKIImzZZQO

The Pacific Office Automation 147 will take place on Saturday, June 4, at 4:30 p.m. ET, with TV coverage provided by FOX Sports 1.