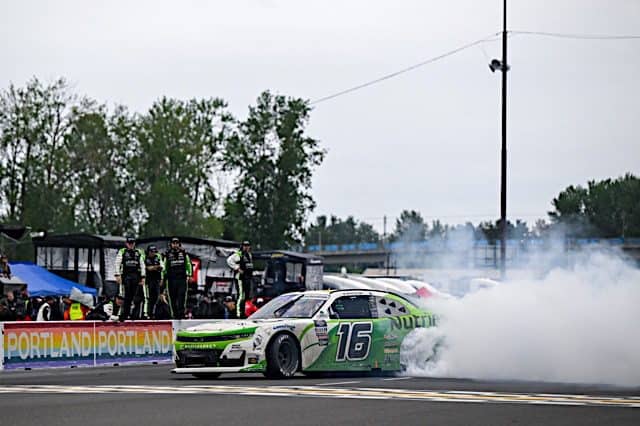 Allmendinger took the lead away from Myatt Snider after a late restart and held on for the victory.

It’s the Kaulig Racing driver’s second win of the year and 12th in his NXS career.

“Oh my God, all the men and women at Kaulig Racing deserve that,” Allmendinger told FOX Sports after the race. “I cannot believe, I crashed before we went green. I was off the racetrack I think four times, made all kinds of mistakes, was all over the place. …Just proud of everybody on this Nutrien Ag Solutions Chevy. I was melting down in the car, honestly, making so many mistakes, trying so hard. I put so much pressure on myself in these races because I know what everybody expects. I know what I expect out of myself, more importantly.

“What a win, it might be one of the craziest wins I’ve ever had. Most mistakes to ever win a race, for sure.”

Daniel Hemric was sixth and Ty Gibbs, who went off track late after leading most of stages one and two, finished seventh. JJ Yeley, Noah Gragson and Alex Labbe finished up the top 10.

Visibility was a huge issue during the first part of the race. Many drivers slid or spun in the grass in stage one, including Allmendinger, who went off track a few times. Gibbs took the lead off the bat and held it to win stage one.

On the ensuing restart, a big crash occurred when Riley Herbst got spun after contact from Sheldon Creed. The spray from all the cars in the pack reduced visibility, and Gray Gaulding couldn’t see Herbst on the right side of the track. He slammed into the No. 98, which ended his day. Darren Dilley and Matt Jaskol also had major damage after getting caught up in the wreck.

Herbst later retired from the race due to a broken track bar.

After the caution flag waved on lap 40 for debris, Gibbs was spun by Jesse Iwuji coming through the first corner. The No. 34 was held two laps on pit road for making contact with the No. 54.

Gibbs lost the lead to Gragson but bumped the No. 9 moments later, sending him off track. Then, after Creed grabbed the lead from Gibbs, the Nos. 2 and 54 skidded off track and into the grass, leading to a new set of frontrunners.

Andy Lally’s No. 44 held the lead for a few laps before he relinquished the position to Snider, who won stage two. During this stint, multiple drivers encountered trouble, most notably Jeremy Clements. The No. 51 went off in the grass and slid back to rest in traffic, getting clipped by Stefan Parsons as the field tried to avoid him.

Yet another caution came out, bunching up the field once again. As they entered turn 1, mayhem ensued as several cars got turned and missed the corner. Creed got spun around and as he went back rolling, he ran into Alex Labbe, who had slowed to serve his penalty.

Jeb Burton also got some big front end damage; both Burton and Creed’s days ended around lap 57. Creed later expressed his displeasure with Jade Buford by giving the No. 48 a double middle finger as it drove by.

Allmendinger surged into the lead on the next restart, while behind him, Brett Moffitt got hooked around and several more cars were caught up in the carnage. Connor Mosack’s strong run ended; Anthony Alfredo, Spencer Pumpelly and Parker Chase also had major damage.

Turn 1, as usual, was a problem the next time the green flag waved. Landon Cassill and many others spun around, with the No. 10’s rear panel hanging off as it drove away. Caution came out for debris in the area.

4 wide on the restart 😬 pic.twitter.com/5RVK5MeeLC

Allmendinger eventually took the lead from Snider on a restart and held it to the end.

Xfinity drivers take on Nashville Superspeedway in a few weeks. The Tennessee Lottery 250 airs on June 25 at 3:30 p.m. ET on USA Network.