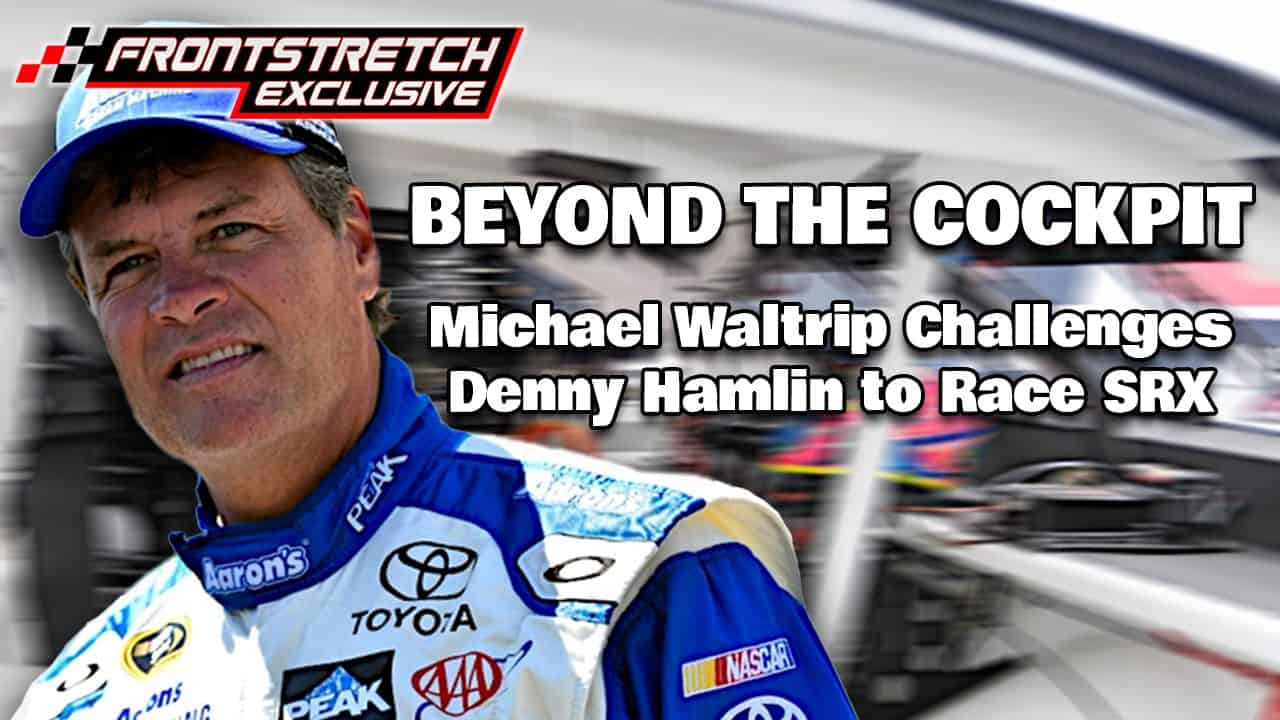 The Superstar Racing Experience enters its second full season of racing with many of the stars last season returning.

Frontstretch was able to talk to Waltrip about coming back for a second year, expectations for the 2022 season and drivers that he would like to see in SRX. The SRX season starts on June 18th at Five Flags Speedway on CBS.

You can listen to the interview on the Frontstretch Youtube page or read below.

Jared Haas, Frontstretch: What’d you like about the first season that inspired you to come back for season two?

Michael Waltrip: It happened pretty early in the season when I was able to take the lead and drive off at Stafford [Motor Speedway]. As a racecar driver, winning, leading and passing people, that just makes you want to do it that much more. I had a great experience at Knoxville too, really fast car there. I’m a competitor, I love to compete and I love the personalities. Probably the thing that I enjoyed the most was a cold beer after the race with my budd[ies] Bobby Labonte, Kenny Schrader and Bill Elliott. I’ve been racing those guys since the ’80s, most of them. It’s fun to have sort of a reunion tour and that’s what it felt like.

Haas: What do you think the biggest difference is between season one, the inaugural one, to [the upcoming] season two?

Waltrip: Well, I just hope the biggest difference for me is I win. I want to win a race. I want to be out there and contend for wins, yet had a couple of crashes. As much as passing people and leading races makes you feel like the man, and that you’re right where you want to be; soon as you get wrecked out, you’re like, “No wonder I don’t like racing all the time.” Hopefully, no wrecks and some wins.

Haas: What are your realistic expectations going into the season?

Waltrip: I just feel like we can contend for wins. There’s a bunch of great racecar drivers, obviously, that[‘re] going to be on the track, so it’s really difficult. Seeing Tony Stewart being there, and [him] winning and being the champion, Chase Elliott showing up and some of the competitors, [Ryan] Blaney joining us this year, it would feel really good to beat all those guys one night.

Waltrip: It’s just a lot of fast drivers with one thing in mind. They know nothing else matters; go win. You’re just gonna see a go-for-it attitude but leave no chips on the table. Just make sure you’re on the gas on every lap. I think that’s what makes it so fun for the fans, and for me as a driver that hadn’t raced in a few years. It was really cool to just look up in the stands and see all the smiling faces, loads of race fans that were just right where they wanted to be. Whether we were up in Connecticut, or we were in Nashville, Tennessee or wherever we went, it was a really fun atmosphere to race in.

Haas: What do you think about the new tracks that are on the season two schedule for SRX?

Waltrip: Well, I just think that anytime you can mix it up on the dirt going to Pevely (I-55 Speedway) or going to Sharon [Raceway]. That’s just fun. I was thinking about this [this] morning, I can’t remember racing at Pensacola [Five Flags Speedway]. I might have once or twice, like when we would take all the Cup drivers and go for a weekend of short track racing, but I don’t recall. I’m really looking forward to checking out that historic facility. Then, of course, Nashville is close to home, and we got race there last year. I’m looking forward to being back on the track again this year.

Haas: Are there any tracks that should be added to the schedule?

Waltrip: That’s a great question. I grew up in Owensboro, Kentucky and there’s [a] track there, Kentucky Motor Speedway in Whitesville. That would be fun for me, obviously, because it’s my home track. Maybe I would vote that one on the schedule. We talked a little bit about this before with the other racers — let’s put up a temporary track somewhere. You go into the middle of nowhere or in the middle of a town and race around in circles. That might be really fun to do too.

Haas: There have been new drivers popping into the series. What driver do you want to see join SRX next?

Waltrip: Darrell Waltrip. I would love to share the track with my brother. That would be really cool, but I know several of the Cup guys have expressed interest in running an SRX race. Anytime I can hang around with those guys and get to talk about them on TV a lot, so anytime that I can race against those guys, that makes me smile. Come on out, Denny Hamlin. Give it a go.

Haas: With Darrell, do I smell a dream machine coming around here like Martinsville in 2006?

Waltrip: Yeah, you never know. The ole Aaron’s Dream Machine was a lot of fun for my brother and I. Let’s take the SRX [to] North Wilkesboro [Speedway] and let that be where DW races us, because he was so good there for all those years when he drove for Junior [Johnson].