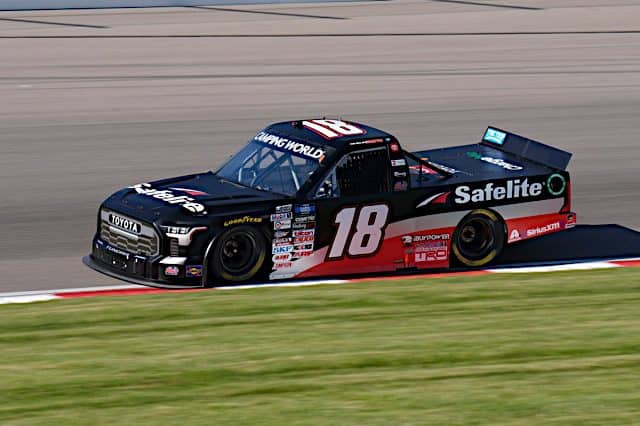 MADISON, Ill. – Chandler Smith had a fast No. 18 Kyle Busch Motorsports Toyota in the NASCAR Camping World Truck Series race weekend at World Wide Technology Raceway. He was fourth-quickest in both practice and qualifying for the Toyota 200.

On Saturday (June 4), Smith led 22 laps and picked up the stage one victory, scoring his first stage win this year and accruing his sixth playoff point.

Smith retook the lead on lap 44 and seemed on his way to winning stage two as well. Following a caution on lap 63 as he and Grant Enfinger battled for the lead with only a few laps left in the stage, Enfinger got loose, and his No. 23 slid up into Smith, resulting in damage to both drivers’ vehicles.

Smith’s crew chief Danny Stockman Jr. guided the team through repairs to the No. 18 and Smith continued wheeling it back to the front.

On the final restart, Smith had a shot for the victory, his second of the season, but instead he wound up third. The winner? His teammate Corey Heim, who also bested Smith for the win earlier this year at Atlanta Motor Speedway.

It was frustrating for Smith, who took solace in the performance despite Enfinger spinning him.

“It definitely shows [it’s a] championship-caliber team,” Smith said post-race. “If the No. 23 didn’t run out of talent there whenever he junked us, we probably would’ve lapped half the field. Extremely good, wicked fast – they didn’t have anything for us today, just straight up. Our tires probably had four times more wear than everybody else in the field. Still ended up third. Probably should’ve won the race too, honestly, but the No. 51 ran me up into the fence. Didn’t feel like being that guy and shipping him; I’m getting really tired of it but it is what it is. Really happy with everyone at KBM for giving me a fast Safelite AutoGlass Toyota Tundra.”

Enfinger owned his mistake when he spun Smith.

“Yeah, nobody likes to wreck their stuff,” Enfinger told Frontstretch post-race. “He had a really good truck and I wanted more room. He had the opportunity to give that and it was 100% my deal. I hate it, hate it for us, hate it for those guys. Tough racing there at the end of the stage trying to grab the [stage] win and Chandler didn’t want to give it [room] obviously.”

“I normally own my mistakes,” he added. “I’ll talk to him. I’m normally one of the guys when I screw up, I tell him I screwed up.”

Ultimately, Enfinger ended up with worse damage from the incident. He finished two laps down in 28th place.

I spoke to Grant Enfinger post-race. He owned his mistake when he wrecked both himself & Chandler Smith. Enfinger was proud his GMS Racing team repaired his No. 23 good enough to finish. pic.twitter.com/1YkU8YDh8s

It was a testament to his GMS Racing team.

“All the guys fixed the truck as best we could. Charles [Denike, his crew chief] did a good job keeping everyone calm. We went a few laps down but we had a lot of damage. It’s pretty impressive our guys were able to fix that, then continue to make laps. I hate that I did that. Just fighting to win that stage there at the end of stage two. Wanted a little more room there and got loose under Chandler. 100% my fault, hate that we gave away the opportunity there. Our Champion Power Equipment Chevy was pretty good and I junked it pretty good today.”

As for Smith, his third-place finish is his fifth top-five finish and eighth top 10, one shy of tying his career-best set last year. Running well isn’t a goal for Smith; it’s an expectation.

“We should be running this good every week so it doesn’t do anything,” he stated.

One of the problems Smith endured following his spin was fueling issues. It didn’t affect his finish, though.

“We were good. That was the result of the contact between me and the No. 23.”

Actually, Smith’s spin didn’t heavily hamper the handling of his No. 18.

“We were a little tighter but we got the adjustments in it and what I needed to have. We were just a little draggy, but other than that it was fine,” he continued.

Next up for Smith is his first-ever race at Sonoma Raceway. In his few Truck road race starts, Smith has one top 10, a fifth-place finish at Circuit of the Americas earlier this season.

Nevertheless, Smith isn’t lowering his goal for the Sonoma race.

“There isn’t an expectation but just try to go out there and win.”