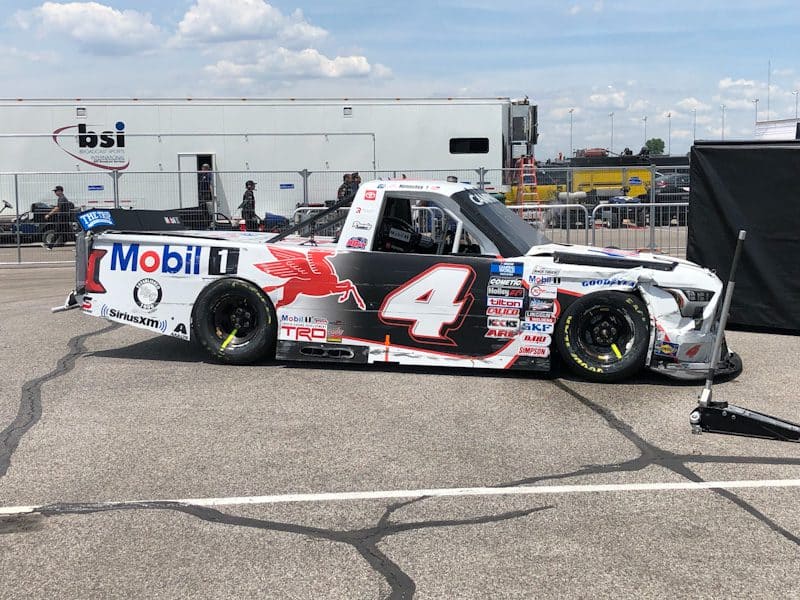 MADISON, Ill. – Kyle Busch Motorsports’ John Hunter Nemechek had an excellent run early on Saturday (June 4) at World Wide Technology Raceway. He ran third in the first stage behind teammates Chandler Smith and Corey Heim. In the second stage, he tried to get all he could, but trouble struck.

“[Stewart Friesen] had a run and got to the inside of [Corey Heim],” Nemechek said outside of the infield care center. “They were side-by-side and [Friesen] kind of got sucked around, got loose under [Heim] and went up the racetrack.

“I had a hole and with how hard it is to pass, I took it,” Nemechek continued. “I probably shouldn’t have put myself in that situation in hindsight. But, you gotta be aggressive on these restarts. Once everything singles out, you can’t really pass. It’s one groove around the bottom today.”

Nemechek ended up spinning and hitting the outside wall with the left front corner before coming to a halt. He admitted to clipping the curb prior to the incident, but says that it didn’t cause the crash. Ty Majeski and Blaine Perkins ended up hitting Nemechek, while Jesse Little and Colby Howard were also involved. The replays showed that Perkins appeared to just barely get through unscathed, but he did have some contact that necessitated some time spent in the pits. Nemechek was the only driver eliminated in the crash and eventually finished 35th.

Prior to the wreck, Nemechek was pretty satisfied with his truck, saying it was “fast all day, which is all that matters.” He thought that all three of the KBM trucks were very close and could very well have all been battling for the win like they were in the opening laps of the race.

Nemechek entered Saturday’s Toyota 200 presented by CK Power with a seven-point lead in the standings over defending series champion Ben Rhodes. The crash cost him that lead.