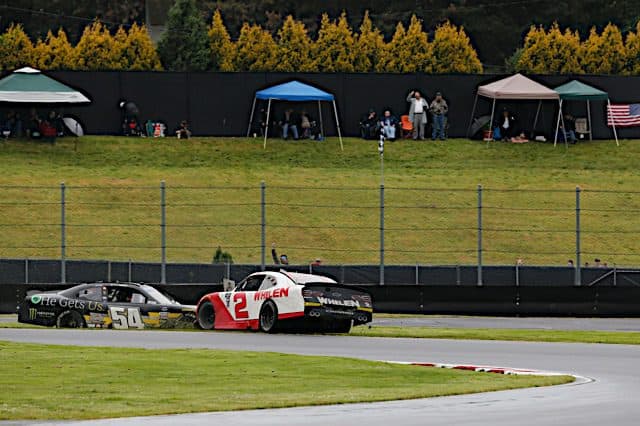 By the time the dust settled, 12 cars had crashed out the race and at least double that amount were involved in incidents throughout the day, as drivers struggled with heavy rain and chaotic restarts throughout the afternoon.

Even road-racing ace AJ Allmendinger, who went on to win by nearly three seconds over Myatt Snider, was not immune to the struggles. Allmendinger went off course during the pace laps before the start of the race, and he then spun a second time in the opening laps. With his opening struggles, he was already a lap down to leader Ty Gibbs before the race had reached lap 10.

But with the help of an early caution to get back on the lead lap and a clean second half of the race, it was Allmendinger who prevailed for his eighth road-course win in the Xfinity Series.

“I crashed before we went green,” Allmendinger told FOX Sports 1 during his race-winning interview. “I was off the racetrack I think four times, made all kinds of mistakes, was all over the place.”

“It might be one of the craziest wins I’ve ever had.”

After the first lap confusion, the race was relatively clean for the first few laps aside from a couple harmless spins. But the first major incident came on lap 13, when Mayer got into the back of another car while trying to avoid a spinning Brandon Jones. With irreparable damage, Mayer was the first car out of the race.

The next major incident came at the start of stage two, as Riley Herbst was spun in front of the field by Sheldon Creed on lap 28. Not everyone was able to avoid him, and he was slammed from behind by Gray Gaulding. Both drivers were done for the day.

The race was even full of chaos to the point that there were crashes under caution. During a caution for debris on lap 40, Jesse Iwuji was told to pass Gibbs under caution to get a lap back. However, miscommunications between the two teams led to an incident where Iwuji got into the back of Gibbs and spun him around during the pace laps.

“Tell the spotter of the [No.] 54 I’m sorry, when I was told we could go past him I thought I could go by him, but I guess he wasn’t aware,” Iwuji said over the radio during the caution.

Before the incident, Gibbs was on a Saturday drive. He led 42 of the first 43 laps, and no one was able to keep pace with him. When given 10 green flag laps, Gibbs had continued to build up a 15-second lead before cautions forced him to do it all over again.

But when the field went back to green on lap 44, it was clear that Gibbs’s car was not keeping the pace that it had before the spin. The field smelled blood in the water and Noah Gragson roughed him up on the restart before taking the lead in the first few corners.

In a possible retaliation, Gibbs sent Gragson spinning before the first lap was even complete.

Gragson finished ninth, but he was clearly unhappy with the way Gibbs raced him.

“Oh, we’ll take care of that [incident],” Gragson said after the race. “I mean we were racing, I got the lead, he cheap-shotted us but we’ll keep it in the back of our minds and just try and go to Nashville and win that race. You’ll know when I get him back.”

“You’ll know when I get him back.” @NoahGragson did not hold back discussing the contact with @TyGibbs_.

With Gragson out of the picture, Gibbs was back in the lead. But his time out front was short-lived, as Creed made quick work of him a few turns later. The two drivers kept racing each other hard, and in turn 12, Creed and Gibbs went spinning off course. Neither driver saw the lead again for the rest of the race.

More calamity ensued on the following lap, as Jeremy Clements spun through the wet grass on lap 45. His day was ended after the front end of his car was clipped by the left rear of Stefan Parsons.

“Unfortunately, I couldn’t see good,” Clements said. “I had oil or something that had gotten on the windshield, and it just smeared it. Just trying to figure out where to even start braking and I think I just didn’t brake soon enough, locked up the rear tires, spun through the grass and got hit by another car.”

The closing laps of stage two developed into a battle between Snider and Andy Lally, with Snider prevailing for his first career stage win. The race resumed on lap 56, and once again, the field crashed heading into the first corner.

Numerous drivers were collected, but Creed and Jeb Burton suffered the worst damage. To add insult to injury for Creed, he had missed the first turn and served his penalty by stopping. But unbeknownst to him, Alex Labbe stopped in front of Creed in order to serve his penalty. Creed was unable to avoid running into the back of him, and his No. 2 car was totaled. It was his fourth DNF of the season and it came in a race where it looked like he had to speed to score his first win.

“I was getting going, and I was looking left, not watching [Labbe], and he just frickin’ parked it in front of me and I drove into him,” Creed said. “Just the way our year’s gone.”

Creed was also unhappy with Jade Buford for starting to initial collision. When Buford passed by Creed’s destroyed racecar, Creed let him know that he was No. 1 with both hands.

The race resumed on lap 63 and the most damaging crash happened before the leaders could, once again, complete the first lap under green. Brett Moffitt was tagged from behind, and a chain-reaction crash ended the days of Parker Chase, Spencer Pumpelly, Bayley Currey, polesitter Alfredo and Connor Mosack, who was making his Xfinity Series debut.

“Everybody was racing really hard there,” Mosack said. “I don’t know what happened ahead, but I was behind I think [Austin Hill] and he just checked up all of a sudden and I just couldn’t stop the car and killed the front end there. Just an unfortunate day, I feel like we had a really good Open Eyes Supra, but it just didn’t turn out for us.”

After the Big One with 12 laps to go, no other cars retired from the race. There was once again a big crash heading into turn 1 on a restart with seven laps to go, but everyone was able to drive away.

After the track was cleared, the field was set for a four-lap shootout to the checkered flag. Snider led to field to green with Allmendinger starting alongside of him. Snider put up the best effort that he could, but Allmendinger made quick work of him in the first few corners and then cruised through the remaining four laps for his second win of the season.

The Xfinity Series’ debut race at Portland was — to put it bluntly — a mess. Whether the root cause of the chaos was the rain or the inexperience of drivers at the track is uncertain, but what is certain is that a highlight reel of the crashes in this race could be put to the tune of “Yakety Sax.”

However, the race did have its positives. The battle for the lead was highly competitive in the second half, and most importantly, there was a packed crowd. The crowd was big enough that unless something drastic happens, Portland will most likely be on the schedule again for 2023.

And if the track is back for 2023, the question then turns to how to make the race less destructive for next year. The answer may be as simple as a sunny day and drivers with a race of experience under their belts. But at the same time, the Xfinity Series may need to change the restart rules with the opening chicane. Most of the big crashes happened while heading into the first chicane after a restart; removing that chicane on restarts may be the solution to a cleaner race. In fact, the ARCA West race later that evening did just that.

FYI: ARCA West will bypass the chicane on the start and all restarts.

Accidents will always happen in racing, but it’s hard to recall a road course with as much destruction as this one. For better or for worse, today’s race at Portland will be talked about for a long time.

The rain made it interesting, but in the end, the top road course ace was triumphant yet again.

P.S… am I the only one old enough to get the Boots Randolph reference?

The only thing I remember about Boots is “Yakety Sax.”