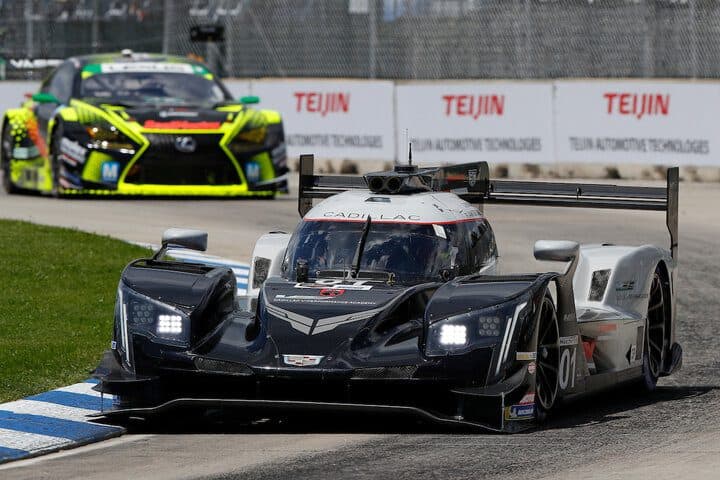 Chip Ganassi Racing’s Sebastien Bourdais and Renger van der Zande led 69 of 73 laps Saturday (June 4) to win the Chevrolet Sports Car Classic, the final IMSA WeatherTech SportsCar Championship race at The Raceway at Belle Isle. For Bourdais and van der Zande, it is their second victory of the year after winning the other street race at Long Beach.

“It was definitely not the easiest race for us,, but I’m super proud of that whole [No. 01] Cadillac team,” Bourdais told NBC Sports after the race. “What a day. What a day for Ganassi and Cadillac. And Renger [van der Zande] brought it home, it was very hard. We had to save a ton of fuel. It was hardly fought but that much sweeter when you win it.”

Bourdais started from his fourth pole of the year and led early. However, Meyer Shank Racing with Curb-Agajanian’s Tom Blomqvist was right on his tail. This was despite Blomqvist complaining on the radio that his traction control wasn’t working very well.

The Cadillacs are said to be better on bumpy tracks than the ORECA 07-based Acura ARX-05. However, Blomqvist had no trouble keeping up. Blomqvist was never more than a second behind Bourdais for the entire first half of the race. The rest of the DPi class was quite a bit further back.

Normally, DPis can go around 35-42 minutes on a tank of fuel. That would require a two-stop strategy for a 100-minute race like Saturday’s. However, Bourdais and Blomqvist were able to stretch their fuel all the way to the 50-minute mark. Meanwhile, others like Pipo Derani went with a two-stop strategy.

Despite the constant fuel saving once van der Zande got in the car, he still had to deal with Oliver Jarvis. Jarvis threatened van der Zande for the last 20 minutes of the caution-free race. Meanwhile, Earl Bamber was able to dispatch of Derani in the closing minutes. Van der Zande was just barely able to hold on for the win.

Bourdais and van der Zande ended up just .398 seconds ahead of Blomqvist and Jarvis at the finish. Teammates Earl Bamber and Alex Lynn were a few car lengths further back in third. Action Express Racing’s Derani and Olivier Pla were fourth, while Wayne Taylor Racing’s Filipe Albuquerque and Ricky Taylor were fifth.

In GTD, VasserSullivan’s Kyle Kirkwood started from the class pole in his Lexus, but his time at the front did not last very long. The Heart of Racing’s Roman DeAngelis was able to take his Aston Martin to the lead on the first lap. Meanwhile, Turner Motorsport’s Robby Foley had some salt rubbed into his wound. In addition to starting at the rear of the field, he had to serve a drive-through penalty for changing tires after qualifying Friday.

Despite losing the lead on the opening lap, Kirkwood was able to keep pace with DeAngelis, never letting him out of his sight despite driving with an injured hand.

Meanwhile, trouble struck for HTP Winward Motorsport’s Russell Ward. Ward was forced to pull off at turn 11 after apparent wall contact.  He pulled off into the runoff just past the fountain. Ward was ok and the car was considered to be in a safe spot. As a result, no yellow was thrown.

DeAngelis led until he made his pit stop at halfway to hand over to Ross Gunn, who was driving in place of regular teammate Maxime Martin. A couple of laps later, Kirkwood pitted the No. 17 Lexus in order to give way to Ben Barnicoat. The VasserSullivan team managed a total pit-stop time of 46 seconds to The Heart of Racing’s 50 seconds. That was more than enough for Barnicoat to jump over Martin and keep the lead that Kirkwood inherited with DeAngelis’s pit stop.

Barnicoat was able to main a small advantage over Gunn, enough that the Aston Martin racer could not make a move on him. In the final 25 minutes of the race, Barnicoat began to open up the advantage slowly but surely. Just enough that the outcome was not seriously in doubt as VasserSullivan took their first GTD victory of the year.

Barnicoat and Kirkwood’s margin of victory was 2.263 seconds over DeAngelis and Gunn. Paul Miller Racing’s Bryan Sellers and Madison Snow were third in their BMW. Frankie Montecalvo and Aaron Telitz in the second VasserSullivan Lexus were fourth, while McAleer and Mike Skeen were fifth.

IMSA teams will take the next couple of weeks off before returning to action at Watkins Glen International for the Sahlen’s Six Hours at the Glen. All five classes will be in action for the third race of the Michelin Endurance Cup and Frontstretch will be on-site to bring you all the action.