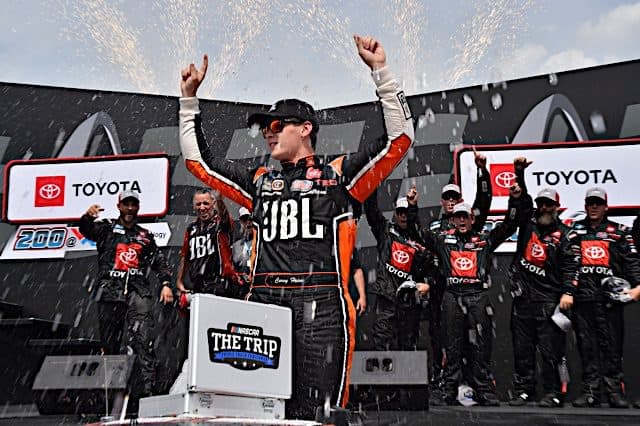 The win snapped a three-race winless streak for Heim, who also won at Atlanta (March 19) behind the wheel of his No. 51 Kyle Busch Motorsports Toyota.

Heim, who started from the pole and led 21 of the 165 circuits, also collected an extra $50,000 in prize money in the opening race of the Triple Truck Challenge initiative. Not too shabby for a 19-year-old.

“I can’t believe I got the bottom right there — that’s unbelievable,” said Heim, who picked up his second career win in his 12th start in the series. “A great push from my teammate Chandler Smith right there…”

Chandler Smith overcame an early spin to come home third in an impressive display of overcoming adversity in the second of three Kyle Busch-owned trucks. Stewart Friesen finished fourth in his No. 52 Halmar International Toyota and former series champion Johnny Sauter closed the curtain on the top five.

Toyota swept the top-five spots for the sixth time in series history. The first such sweep occurred at Gateway in 2006.

The race was halted on the final after a multi-truck incident froze the field. The accident was caused when the No. 19 of Derek Kraus got in the back of Carson Hocevar, sending the No. 42 around. Just moments later, Hocevar slid down the racetrack and was pounded in the driver’s side door by the No. 5 entry of Tyler Hill. Hocevar was assisted to the ambulance via stretcher but gave a thumbs up to the crowd on the way. NASCAR officials confirmed Hocevar was transported to a local hospital for further evaluation.

Eckes had over a one-second lead with three laps remaining in regulation, but that evaporated when Tanner Gray crashed, sending the field into overtime.

“It’s really frustrating,” Eckes said. “The last three weeks, we should have won, but we didn’t. So we’ll go back to the drawing board and try to figure something out.”

John Hunter Nemechek entered the race as the points leader. However, on lap 54, the 24-year-old tried to force a three-wide situation off turn four and it backfired. Nemechek clipped the rumble strip and spun his No. 4 Mobil 1 Toyota around, collecting Ty Majeski, Blaine Perkins, Colby Howard and Jesse Little.

Immediately following the aftermath, Nemechek jumped on the radio and took responsibility for the accident.

Nemechek dropped out of the race after completing 57 laps.

“That was on me,” Nemechek said. “I put myself in a vulnerable spot.”

Chink in the Armor for Mr. Consistency

Eight laps after Nemechek’s wreck, Grant Enfinger spun while battling Chandler Smith for the lead entering turn 1 and both trucks spun. Smith somehow escaped without touching the wall. Enfinger, who entered the event with three top-three finishes in his last four starts, smashed the outside wall hard, ending his day.

During a two-lap shootout at the end of stage two, Friesen, who had spent most of the day in the top five at that point, suffered a flat tire after contact from Hailie Deegan‘s No. 1 David Gilliland Racing Ford. The Canadian exemplified his displeasure with Deegan by crowding her toward the apron.

Deegan, who finished 15th, brushed it off in her post-race interview.

Hailie Deegan sums up her day at Gateway and as far as Stewart Friesen being angry with her, “Everyone was upset with everybody. … You could be dead last and you can see 10 trucks trying to wreck each other under caution.” pic.twitter.com/YBoV89my1k

If three-time 2022 winner Zane Smith isn’t pumping his fists in victory lane, it seems that he is always battling some form of adversity. Saturday was no different for the driver of the No. 38 Front Row Motorsports Ford. On lap 102, Smith suffered a flat tire following contact from Hocevar. However, he recovered to finished ninth.

Three teenage drivers made their Truck Series debut – Rajah Caruth (11th), Mason Maggio (27th) and Jake Garcia (29th). Caruth ran as high as fifth until he was busted speeding on pit road. Then with 34 laps remaining, Caruth scraped the outside wall, which effectively ended his chances of winning. But despite how it ended, Caruth was impressive in his first start at the tricky St. Louis track.

Nemechek’s mistake cost him the points lead this week. Rhodes is back on top of the board in his first title defense and maintains a 17-point advantage over Chandler Smith.

There’s no question who is the rookie of the race this week. Let’s give it up for Heim. Here are the other rookies and how they performed:

Applause: The aforementioned Caruth ran well for most of the day. Moreover, a 14th-place effort for Thompson was his third top-15 result of the season. He finished a career-high 11th at Las Vegas (March 4).

The Camping World Truck Series will be turning left and right next week when the pros hit wine country next Saturday (7:30 p.m. ET, FS1, MRN, SiriusXM) for the DoorDash 250 at Sonoma Raceway.