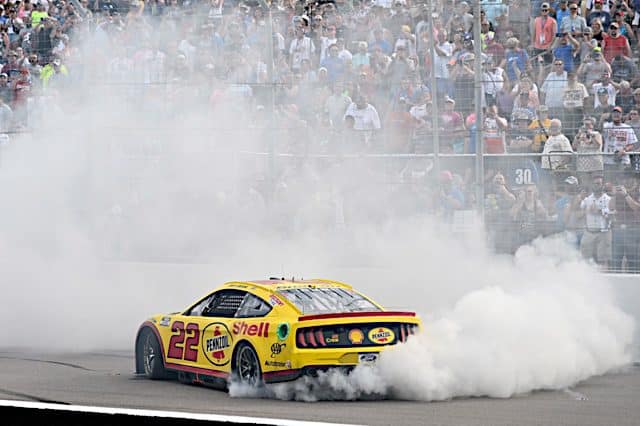 Chasing down Kyle Busch inside of 15 to go in Sunday’s (June 5) inaugural Enjoy Illinois 300 at World Wide Technology Raceway at Gateway, Joey Logano was in position to make the move for his 29th career NASCAR Cup Series win.

However, a late-race caution for Kevin Harvick’s hard hit into turn 3 set up an overtime finish. That might’ve thrown a wrench in the works, but after a lap of trading slide jobs with Busch, it was Logano’s No. 22 out front, taking the checkered flag for his second points-paying win of 2022.

The last two laps were PACKED with action.

Interviewed by FOX’s Jamie Little on the frontstretch, Logano addressed a sold-out crowd.

“I hope you guys enjoyed that race,” he said. “It doesn’t get much better than that. Racing for the lead with Kyle [Busch], one of the best. It’s a lot of fun.

"It doesn't get much better than that!"

“I knew [the move from Busch] was coming [because] I did it to him,” Logano said. “I knew he was going to do it to me, and [I] was able to cross back and forth there a couple of times […]  Jamie, I’m out of breath here.”

Other than Logano, very few drivers are going to be leaving St. Louis happy. All afternoon tempers flared on the banks of the Mississippi, first triggered by lap 65 contact between Ross Chastain and Denny Hamlin that sent the No. 11 into the turn 2 wall.

Sent multiple laps down with a broken toe link, Hamlin didn’t hesitate to show his displeasure to the driver of the No. 1.

But Chastain’s adventures continued. Contact with Chase Elliott on a stage two restart spun the No. 9 in turn 4, collecting Bubba Wallace and Harrison Burton.

The No. 9 spins coming off of Turn 4. pic.twitter.com/UREj4vSLlk

With damaged cars stranded at the back of the pack, Elliott and Hamlin pestered Chastain wherever they could. The list of angry drivers grew longer as Elliott managed to tangle with BJ McLeod and, after contact from the No. 47 sent 23XI driver Wallace — and the Hamlin-owned No. 23 — spinning, Hamlin gave Ricky Stenhouse Jr. a piece of his mind.

Chastain was apologetic after the race, owning up to his role in the carnage.

“It was just terrible driving,” he said. “[…] It’s one thing to do it once, but I just kept driving into guys. At this level, I’m supposed to be better than that.”

“I mean, it’s good [Chastain] takes responsibility,” Hamlin said after Chastain’s message was relayed to him, “but ultimately […] it ruined our day. […] The unfortunate part is it didn’t look like he got too shy after that, because I think he got the [No. 9] after that one.

“We’ve all learned the hard way, we’ve all had it come back around on us, and it’ll be no different.”

"We all have learned the hard way … [Chastain] will be no different."- Denny Hamlin https://t.co/b2cycDf4X5 pic.twitter.com/xh4aUJglAV

Chase Briscoe led the opening 27 circuits after starting from his first career pole position, but a cut left rear tire then dropped the Indiana native off the lead lap. Rookie Austin Cindric was then promoted to the top spot, a lead he held through the end of the stage for his first career stage win in the Cup Series.

The chaotic second stage was capped off with a late caution, setting up a seven-lap fight to the finish that saw Kurt Busch narrowly claim his second stage win of 2022 over Martin Truex Jr.

In the end, Kyle Busch had to settle for second, followed by his elder brother Kurt, Ryan Blaney and Aric Almirola, whose day ended with a solid fifth place. Truex, Erik Jones, Chastain, Christopher Bell and AJ Allmendinger finished out the top ten. Allmendinger, who had never driven a single lap around WorldWide Technology Raceway until the green flag fell and had to take a late flight into St. Louis after winning the inaugural Xfinity Series race at Portland International Raceway yesterday afternoon, managed the top-10 effort after running in the top 20 most of the afternoon.

Great race. Good to see logano and busch race together without taking each other out. Two good gladiators of the sport.

I would love to see Hamlin give Stenhouse a piece of his mind, on TV face to face. Denny would look good in a nose splint. The Mississippi boy wouldn’t take much of Denny’s mouth. lololol

The way Logano pulled away on the GWC makes me believe he would have done the same thing if there was no caution at the end. He was just biding his time the way he kept closing in on Baby Busch. But it would have been interesting to see how he did it.