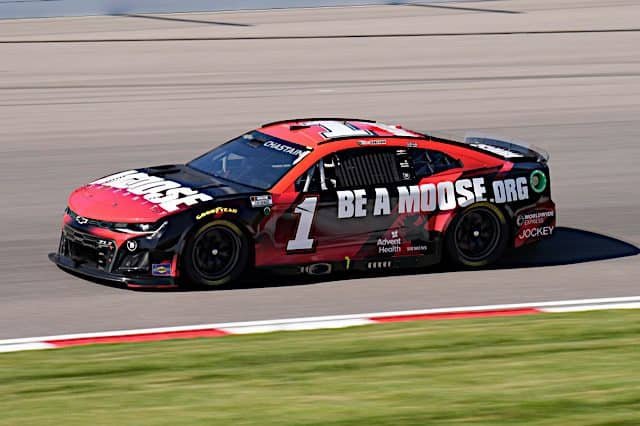 MADISON, Ill. – Ross Chastain and Denny Hamlin both have two victories this NASCAR Cup Series season. These two Cup championship contenders clashed at World Wide Technology Raceway on Sunday (June 5), and it left both drivers unhappy after the Enjoy Illinois 300.

When stage one ended, Hamlin finished fourth with Chastain right behind him.

Thirteen laps into stage two, after attempting to pass Hamlin, Chastain drove his No. 1 Chevrolet into Hamlin’s No. 11, causing a caution.

Hamlin’s Joe Gibbs Racing team repaired his No. 11 to continue, but it was heavily damaged. His chances of winning back-to-back races this season were over.

Hamlin sought retribution, however. Although he didn’t outright wreck Chastain, his driving caught the attention of NASCAR.

Denny Hamlin radio: "The tower says they think you've made your point."

On lap 103, Chastain then made contact with Chase Elliott, making a second driver unhappy with Chastain’s actions.

Yet Chastain’s No. 1 remained intact. In fact, he finished eighth. Unfortunately, Hamlin finished 11 laps down in 34th place.

After the race, Hamlin freely spoke about his ruined race.

“I thought he was being aggressive,” he said. “He got inside of us, I think he was trying to slide us and he would wash up the track and get to our door for three laps in a row. Finally, he tucked up behind us and got into the back of us. I mean, it’s just the choices you make. It made it [his day] more difficult. I didn’t touch his car. We had a miserable day – we went from running up front to limping a car eight laps down or wherever we were all day. You’re just going to have to weigh the odds to make sure they get the message.”

“You got to do more,” Hamlin implored. “You have to do more than that. There are no warnings. When you make positions, and he wasn’t shy. Our contact, there was no sense of conscience there. Maybe I’m being aggressive. That’s his decision to make, he can make any decision he wants to. Obviously, he’s his own guy. He’s been very successful doing what he’s doing. Ultimately, this sport is self-policing. When you least expect it and it means the most is when it comes back around.”

Hamlin could still deliver some on-track payback. It’s to be determined when that will happen, including possibly in the playoffs. Both drivers will vie for their first Cup title.

“Who knows, right?” Hamlin stated. “You never know the time or place, you never know when the right time and place is. Certainly, it ruined our day.”

For this inaugural Cup race at Gateway, Hamlin and Chastain delivered drama. But it wasn’t drama battling for a victory. Instead, it left both drivers leaving unhappily. For Hamlin, it took away a possible race-winning No. 11 Toyota.

“He didn’t have to move us, it ruined our day.”

Maybe Entitled Hamlin should contemplate how often he has ruined someone’s day? Let he who hasn’t used his bumper be the one to criticize someone who has.

I actually laughed when Hamlin was booted into the wall and ruining his day. I laughed again when Denny mouthed off about Stenhouse and bubba. I liked Kurt taking 3rd and bubba 26th. Poor Denny.

Chastain, per Elliott radio chatter, “Needs an ass whooping.” True enough, but why didn’t someone do that? Instead, they lessen their profession by stinking up the show. Somehow the time seems right for Truex to quit and for the entitled one Gibbs to bash a few Chastains around. If comedy is what you want, Nascar is the place to watch. As a co-branding opportunity perhaps each team can have a “pro” wrestler on their pit box who can go beat up the other whenever there is contact on the track. Imagine the picture-in-picture opportunities Fox and NBC. And Nascar will have all the entertainment value we can stomach.

“Instead, they lessen their profession by stinking up the show.”

That’s exactly how I started to feel when Hamlin wouldn’t let it go. I was all for him ruffing Chastain up once when the race went green, but when the race went green after the following caution and Hamlin wouldn’t let Chastain by, it went too far in my opinion. Elliott’s immediate retribution was just about right, smack his car to send it out of the groove. Now, if three races down the road they are racing Chastain hard for position, I will not have a problem with either driver returning the favor and sending him spinning but to turn the race into a grudge match ruins it for everyone, not just the guy that deserves it.

Jimmy Spencer needs to have a “talk” with some of these drivers. Maybe with the window net down?

I was glad to see Chastain take responsibility, but I honestly think he went too far in his apology. He cam across like a puppy dog with his tail between his legs. He could have apologized, said my bad, and I won’t repeat the mistake, and moved on. Instead he went on and on about how terrible his mistakes were. Enough already. Be a competitor, own up, move on, and don’t hang your head, you just make yourself a target for more punishment.

HAHAHA hamlin that asshat got everything he deserved, best part of the race was watching his dumb ass plow into the wall,

LOL… I can’t argue with that.
You know, I find that most drivers that I start out disliking, as they grow older and time passes my dislike lessens. In Hamlin’s case, I started out liking him a little and as the years went by and I watched him, I started to like him less and less until now, he is my least favorite driver. I’d rather see anyone win but him.

They’re both idiots. Chastain drove like an idiot, Hamblin behaved like one. Chastain is young and talented enough that he may learn and grow to the point that he avoids getting in situations like that. Hamblin’s older, he’s often gotten himself in those situations, there’s no hope he’ll ever change.

Didn’t Dale Jr. tailgate a car for lap after lap at Talladega or Daytona until it was suggested that he stop it?

Yep, but he never hit him and he didn’t keep them from racing. He just hung out in his mirror for a while to screw with him. Much more acceptable than Denny’s blocking.

I thought that was a good way to make his point.