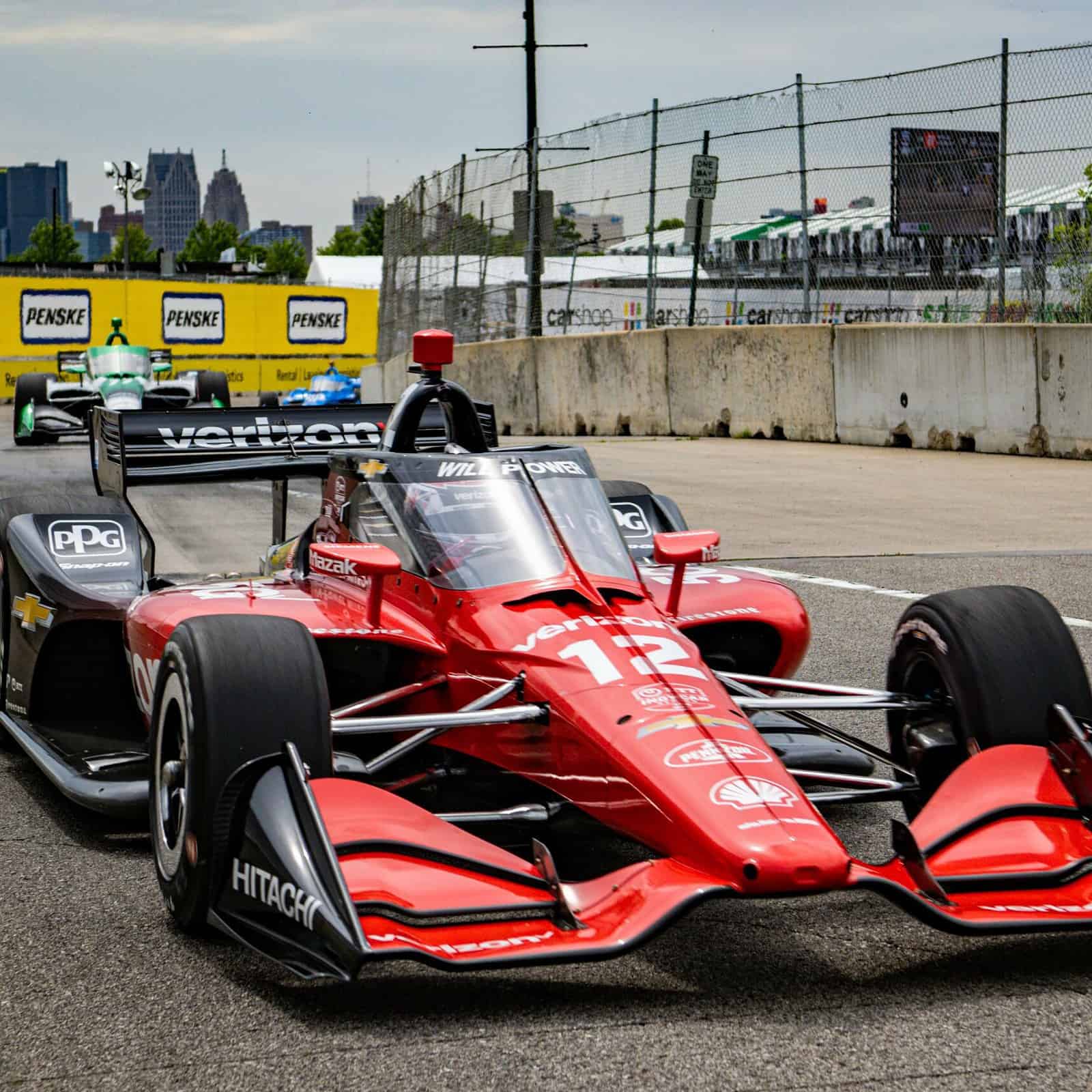 DETROIT— Will Power was a lone wolf as Sunday’s (June 5) Chevrolet Detroit Grand Prix drew to a close, but the 2014 NTT IndyCar Series champion held on to score his first win of the 2022 IndyCar season.

Power beat Alexander Rossi by just 1.0027 seconds after 70 laps around the 13-turn, 2.35 mile street circuit on Belle Isle Park. Instead of an all out charge by both drivers, the race came down to pit stop strategy.

Every IndyCar driver has to use Firestone’s black sidewall primary tires and the red sidewall alternate compound tires for the road and street courses. The red tires are softer and provide more grip, but tend to wear quicker on most tracks. At Detroit, they were not the preferred tire throughout the weekend, with 17 of the 26 competitors choosing to start on the red tires to get that stint done as quickly as possible.

After turning the minimum required two laps on the red tires, drivers started to pit to put on the more durable black tires, with Rossi pulling the No. 27 Andretti Autosport Honda into the pits on the race’s fourth lap.

Meanwhile, Power’s No. 12 Team Penske Chevrolet started 16th on the black sidewall primary compound tires and steadily climbed through the field, grabbing the lead on the race’s 14th lap. The 2018 Indianapolis 500 winner passed 11 cars on track en route to grabbing the lead from polesitter and Team Penske teammate Josef Newgarden while the other cars ahead of Power pitted.

As for Rossi, the Californian was going through the field at an equally rapid rate. After being as low as 22nd on the lap following his first pit stop, the Formula 1 veteran was in 13th by the tenth lap of the race and was fifth by lap 16.

Rossi was in fourth place when he made his second pit stop on lap 24. Power pitted from the lead for the first time on the next lap, putting a used set of primary compound tires on. After that pit stop sequence, Power and Rossi reassumed their positions in the running order, but there was another variable.

Chip Ganassi Racing elected to put Scott Dixon and Alex Palou on the red alternate compounds for their second stint of the race as they respectively ran in second and third place. The pair kept their spots in the running order until Rossi went around Palou for third place on lap 39 and then got Dixon for second place on lap 43.

Power and Rossi would have to stop again for fuel and tires late in the race, but Power still had to put on the red compound tires. Rossi stopped on lap 46 for another set of the black compound tires and Power waited until lap 50 to put on a new set of the red alternate tires.

Power’s race engineer David Faustino had made a large gamble. With all of the on-track running between the IndyCar Series, the IMSA WeatherTech SportsCar Championship, Indy Lights and the Masters Endurance Legends sports cars combined with there being no rain during the weekend, Faustino believed that enough rubber was on the track surface that the red compound tires would last longer at the end of the race than at the beginning.

The decision was made on the fly. Power pitted, and then it was time to do his job to manage the tires and bring them up to temperature carefully for the final 20 laps.

“You can do a bit of damage on the cold tires,” Power said. “I was really cognizant of not slipping the tire too much then just got in a rhythm and drove it really straight, really straight. Can be very quick that way, just a certain way you can drive when tires are like that.”

The gap with 19 laps to go was just over 16 seconds. Power’s car was the only one on the red alternate compound in the lead group. In fact, the next car on the red compound was Devlin DeFrancesco, who finished one lap down in 18th despite being on the same strategy as Power.

Power’s tires would have a lot of grip for a short time, but lap times would steadily drop off. Rossi’s tires would stay at a consistent grip level throughout the final stint. The gap fell steadily except when lapped traffic played a part with about 10 or so laps to go in the race.

As the white flag waved, Rossi was only 2.4652 seconds behind Power. There were no lapped cars between the duo after Rossi got around Santino Ferrucci going to turn 3, but try as Rossi might, he couldn’t quite close the gap to the Australian.

“You’ve got to give credit to the No. 12 guys and Will, I mean that’s hard to do at the end to hang on,” Rossi said. “But yeah, huge thanks to all these boys behind me, the No. 27 NAPA/AutoNation Honda was amazing. Yet again we come here with an amazing car and can’t quite get the win, but that was a good recovery from yesterday. The strategy was good and we’ll take it.”

Sunday’s race was the final one on Belle Isle. For 2023, the race will move to a new circuit in downtown Detroit.

The next IndyCar race is the Sonsio Grand Prix at Road America on Sunday, June 12th. The race will air live on NBC with the broadcast starting at 12:30 p.m. ET.

Amazing how strategy plays out over an entire race and the front two are within a hair over a second apart at the finish (without any cautions to bunch the field!), with the 3rd and 4th place entries within about 5 seconds. Great drive and redemption for Will, but I kinda wished for one more lap just to see if Rossi would be able to make the pass since Will had 2 or 3x more PTP left.

Last edited 2 months ago by Jeremy
0
0