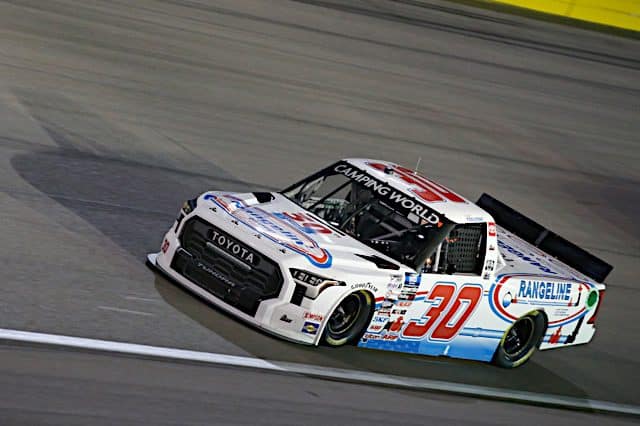 Colin Garrett joins On Point Motorsports in the DoorDash 250 at Sonoma Raceway in the NASCAR Camping World Truck Series, On Point announced June 8.

Garrett will pilot the #30 11/11 Veterans Project Toyota Tundra, which is usually piloted by Tate Fogleman.

Over the course of three part-time seasons in the NASCAR Xfinity Series, Garrett has made 12 starts, with a best finish of 14th at last season’s fall Martinsville Speedway race.

In two part-time seasons in the Truck Series for Niece Motorsports, Garrett has made two starts, with a best finish of 21st in the fall Las Vegas Motor Speedway race in 2019.

“I’m really excited to be back on the NASCAR circuit with On Point Motorsport at Sonoma Raceway,” Garrett said in a team release. “I’m hoping for a good clean race and hoping to finish well for the team and my sponsors. That would be a great day for us all.”

It’s unknown why Fogleman was pulled from the No. 30 and if he will return to the truck moving forward. In 11 starts this year, he has a best finish of 12th at Vegas. Neither On Point nor Fogleman have made a statement at this time.

FOX Sports 1 will have coverage of the inaugural DoorDash 250 on Saturday, June 11, at 7:30 p.m. ET, with radio coverage provided by MRN.