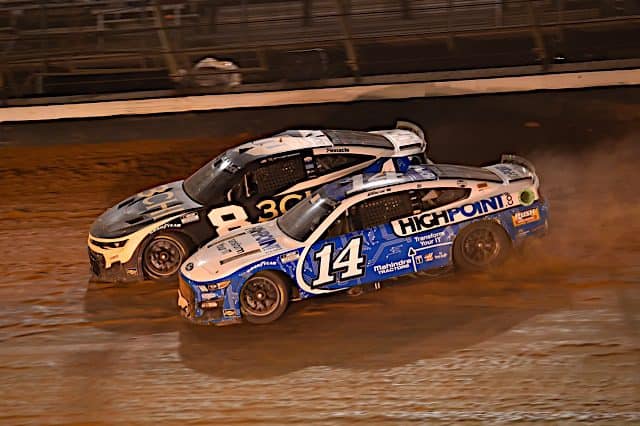 Did You Notice?… The 2022 NASCAR Cup Series season has been defined by a series of near misses?

The latest one came Sunday (June 5) when Kyle Busch seemed to have a win in the bag at World Wide Technology Raceway only to lose it in NASCAR overtime to Joey Logano. Busch appeared to have the edge with brother Kurt behind him, but a miscommunication between the two kept them from pushing each other on the final restart, giving Logano and Team Penske teammate Ryan Blaney the advantage on the inside line.

It’s just the latest close finish this year, as 12 of 15 races in 2022 have featured a lead change within the last 10 laps. But what’s even more unique about this season, and why hype continues to build around 17+ winners, is how many drivers have come so close to victories only to have circumstances turn against them in the final laps.

At least Busch has his win at the Bristol Dirt Race to fall back on, a victory that slipped through the fingers of Tyler Reddick and Chase Briscoe when they made contact on the final lap. Reddick remains winless, leaving this 1976 Daytona 500 moment the one he’ll regret if the No. 8 team winds up on the wrong side of the playoff bubble.

Right now, with 11 races left in the regular season, there are 11 winners and five remaining playoff positions up for grabs. Unlike in past years, when a handful of teams dominated up front, a closer look at the winless list shows a missed opportunity for virtually every driver fighting on the bubble to reach victory lane. The parity’s created the most wide-open year in recent memory, as it’s hard to trust anyone, really, can make it in on points; a win could come from a driver 20th or lower in the standings at any time.

Here’s a detailed look at the drivers still fighting for a win and how close they’ve already come.

Ryan Blaney: Blaney’s already won a race, of course, but it doesn’t count, as the NASCAR All-Star Race isn’t a points-paying event. Phoenix Raceway was his biggest missed opportunity; Blaney won the second stage and led a race-high 143 laps. It was pit road that doomed him, a slow stop where a tire changer mishandled a lug nut. It cost him clean air and tilted the race toward Briscoe.

Blaney also led 128 laps at Richmond Raceway from the pole, typically his worst track, before his car faded over the second half of the race. Overall, he’s led 385 circuits, good for fourth best among Cup drivers and has the second-best average start of any driver (8.4). It’s hard to believe he won’t win before the regular season is out.

Martin Truex Jr.: This season for Truex reminds me of 2020, his first year with crew chief James Small, that was defined by one victory and a barrage of near misses. At one point that summer, he had seven straight top-three finishes without recording a win in any of those races.

In 2022, this No. 19 team is at it again, starting with a Daytona 500 that has always eluded him. Truex won both stages of the race, leading 11 laps, only to get shuffled back in crunch time and involved in a wreck with 50 laps remaining.

Then, there was Richmond, where Truex won stage two, led 80 laps but ultimately fell short to surging teammate Denny Hamlin on tire strategy. At Darlington Raceway, he led 28 laps and appeared to have a car capable of challenging Logano before losing it off turn 2 on a restart. Even last week at WWT Raceway, this team was in position during the final stage before a decision to take four tires trapped Truex too far back in traffic down the stretch.

With Truex considering retirement, it’s another team that’s got the speed and motivation to win before the regular season is out. With former championship crew chief Cole Pearn returning to the team for a weekend, it could happen in the very next race: Sonoma Raceway, a track where he’s already won three times.

Christopher Bell: 10th in the standings, Bell has the best average starting position of all Cup drivers (7.7) and has already won three pole positions. At Circuit of the Americas, he ran third and would have won had Ross Chastain’s move backfired and taken himself and Alex Bowman out along with AJ Allmendinger. Leading 30+ laps three times already this year, you feel like Bell’s time is coming with the way Toyota’s found some speed over the past month.

Aric Almirola: Arguably the hardest driver on this list to make a case for. That said, Almirola felt like he had a car capable of winning the Daytona 500 and was in contention during the final overtime restart (he wound up fifth). WWT Raceway was another close call, with Almirola spending much of the day running between third and seventh before recording his second top-five finish of the year.

WWT Raceway has a lot of similar characteristics to New Hampshire Motor Speedway, the track Almirola won at last year to secure an unlikely playoff bid. It’s always hard to count a driver out when they’re in their final season; he’s racing with nothing to lose.

Tyler Reddick: What a 180-degree swing from Almirola. It’s borderline criminal at this point Reddick hasn’t emerged from 2022 with his first career Cup win. Richard Childress Racing has clearly hit on something with the Next Gen chassis, and Reddick has been the best car, hands down, in at least two races: Auto Club Speedway and Bristol Dirt. We all know what happened at Bristol while Auto Club turned sour over a flat tire under green-flag conditions.

Reddick’s had tire problems so much, in fact, it’s hard to figure out just how many races he could have won. Was he the best car at Kansas Speedway? 24 laps led until tire issues brought him down. The Coca-Cola 600? He seemed primed to win that game of Survivor until his Goodyears didn’t hold up yet another time. He’s also had a few second-bests, like running just behind the Logano-William Byron battle at Darlington and losing out in a three-car tussle for the win at Phoenix back in March.

On paper, this team should win by August. I just don’t know if Lady Luck will allow it.

Kevin Harvick: Harvick has had opportunity knock a couple of times during another disappointing year. There was Richmond, where he wound up a surprising second, fighting Hamlin for the win on fresher tires. Charlotte worked out much the same way, a flurry of late-race wrecks giving him an outside shot at sneaking past Hamlin for the victory a second time.

Other than that, Harvick’s recent trajectory mirrors that of Jimmie Johnson at the end of his NASCAR career. All of a sudden, after three wins the first four months of 2017, the faucet just suddenly turned off for him. Keep in mind Johnson was sitting pretty as the top seed for the playoffs after that final victory at Dover Motor Speedway. It was all downhill for him after that.

Harvick was the best driver, hands down, in a 2020 season that slipped away in a perfect storm during the Round of 8. Can he and his Stewart-Haas Racing team recover in a season where it’s crowded at the front?

Austin Dillon: Let’s face it; the Coca-Cola 600 was Dillon’s to lose. He shot out of a cannon during an overtime restart, armed with fresh tires, and took the field by surprise as he surged to the inside down the backstretch. Coming off turn 4, he just needed to keep from coming up in front of Kyle Larson and victory was his. Just a few more inches …

Instead, Dillon wound up wrecking in front of the field, a mistake you can’t make when you rarely have the fastest car. RCR has stepped up as a whole this year, but that may be Dillon’s lone missed opportunity this season.

Erik Jones: Similar to Dillon, I’m sure Jones still rehashes the final laps of Talladega Superspeedway in his head. His No. 43 car was in control of that April race, leading coming to the white flag and in front for most of the final lap. Jones just made the wrong moves coming off turn 4, blocking an outside run while leaving the inside wide open for Chastain and others to sneak on by. This Petty GMS Motorsports team has had plenty of speed since, leaving them ripe for an upset, but Jones has only led in four other events. A bunch of sixth places will be nothing more than a moral victory if this team can’t find the speed to advance.

Daniel Suarez: Here’s a driver who Trackhouse Racing Team should be benefitting from the speed of his teammate. Indeed, Suarez has been up front in a handful of races, leading 15 laps early at Circuit of the Americas. He was sitting in control of that race early only to have pit road issues and steering problems. The poor luck could be extended to so many other races where the No. 99 has put itself in contention: Talladega and Charlotte are more recent examples.

If Chastain holds up his end of the bargain at the No. 1 team, you’d think the speed would trickle over into the No. 99. Don’t be surprised if Suarez ekes out a win during the summer months as Trackhouse focuses in on ensuring both teams make the postseason.

The list here could go on and on: Bubba Wallace, even Ricky Stenhouse Jr. (who was a surprise runner-up finisher at Dover Motor Speedway). In a sport where fans pined for unpredictability, finally having a real shot at 17 winners can only be a good thing for all involved.

It sounds like Kyle was supposed to give Kurt a hand signal when he was going on the last restart. Then he decided Logano might see it & he’d lose his edge, so he didn’t signal. Clearly a case of overthinking, & it cost him.

I would have really loved to have seen what the Dinger could have done in the 16 full time this season. I expect he would have finished ahead of his teammate, & still may get a win, which like last season still will leave him out of the playoffs.
I still can’t figure the math of paying 8-9 Mil for a charter for a car that won’t be playoff eligible. When the fields are never full, & it would start every week anyway.

How sure are you about that 8-9 million?
I would have thought that 2-3 million would be stretching it.

That’s not the way NA$CAR think!

johndawgchapman
Reply to  Bill B

That was the reported figures at the time. The 2-3 figures were when there was little demand. That’s why some of the uncompetitive teams wound up with 4 or 5 charters, bought on pure speculation. A gamble that paid off big time.