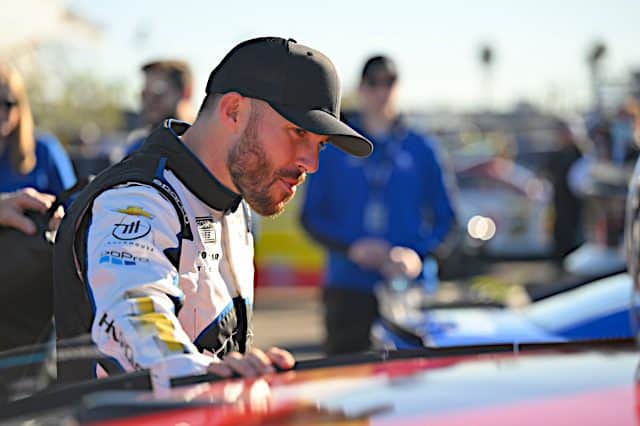 “You must unlearn what you have learned.” – Yoda, Star Wars: Episode V – The Empire Strikes Back

Welcome to the NASCAR Thunderdome!

We got ourselves a feud! A beef! A straight-up … *pauses for dramatic effect*

*crowd goes into frenzy, chairs are thrown, arson is committed*

But hold on a minute. Is that the right way to describe what the Thunderdome has brought before us?

I was there on Sunday (June 5), sitting in the frontstretch grandstands at the track informally known simply as Gateway. While I’ve covered a number of races in person since last summer, it was my first time attending a NASCAR race as a fan since the 2019 Southern 500.

I witnessed something familiar.

I saw Ross Chastain, one of the most aggressive drivers in NASCAR, try and try again to get by Denny Hamlin with a faster car in turns 1 and 2.

See also
5 Points to Ponder: The Good, the Bad &amp; the Chastain

From the last half of stage 1 to lap 65, Chastain edged his No. 1 Chevrolet inside Hamlin’s No. 11 Toyota in attempts to complete the pass. During this time, it was the closest thing to a battle for position on the track. They weren’t joking when they said it would be hard to pass at Gateway.

Then came the contact that sent Hamlin into the turn 2 wall.

Moments after Hamlin hit the wall, someone said, “We’re done,” over the No. 11 team’s radio. They weren’t done though.

Hamlin continued, but not before doing his best Cole Trickle impersonation and demanding that his team put fresh tires on the car.

That was when I saw something I don’t think I’ve ever witnessed before, let alone from Hamlin.

For the rest of the race, the Joe Gibbs Racing driver made it his mission to make Chastain’s day miserable.

If Hamlin wanted to wreck Chastain, he could have easily done so Sunday. While Chastain’s mishaps continued in an incident with Chase Elliott, Hamlin proceeded to get into the head of the Trackhouse Racing Team driver, going out of his way multiple times to impede Chastain’s path or drive him down to the bottom of the track.

“It seems like there’s no sense of conscience there that says, ‘Maybe I’m being a bit aggressive,'” Hamlin said after the race. “That’s his decision to make. He can make any decision that he wants to, honestly.

“He’s his own guy, and he’s been very successful doing what he’s doing. Ultimately, this sport is self-policing, and usually when you least suspect it — and it means the most — it comes back around.”

It was clear a message had been received.

“It was just terrible driving,” a chastened Chastain told FOX Sports 1. “It’s one thing to do it once, but I just kept driving into guys. At this level, I’m supposed to be better than that. … I have all these people believing in me with Justin Marks and Pitbull putting me in this car. They deserve better.”

He added: “I owe half of the field an apology. Words aren’t going to fix it, so I’ll have to pay for it on the track. I almost did today, and I deserve everything that they do.”

See also
Up to Speed: Will Gateway Apologies Save Ross Chastain from Payback?

As I already said, it’s no secret that Chastain is one of the most aggressive drivers in the sport. It’s how he scored his first NASCAR Cup Series win earlier this year at Circuit of the Americas after last-lap contact with AJ Allmendinger.

It’s a trait based largely on how Chastain’s career played out, with him racing in mostly less-than-ideal equipment up until the last three years. He’s had to scrap and claw his way to get here.

A lot of people’s first real chance to see what the Florida driver was capable of came in 2018. Making his first NASCAR Xfinity Series start for Chip Ganassi Racing at Darlington Raceway, Chastain started from the pole. Going on a tear, he led 90 laps and won the first two stages.

Then on lap 111, Kevin Harvick was able to get underneath Chastain in turn 2 in a battle for the lead. As they exited the turn, Harvick slid up into Chastain, who slapped the wall. In the instant, even though it was the first of a three-race tryout with Ganassi, Chastain likely felt the best opportunity of his career slip away.

“You’ve got a really inexperienced guy in a really fast car and made a really bad move,” Harvick said. “Then [he] wrecked me down the back straightaway and hooked me to the right. That’s probably the reason that he’ll never get to drive many of them again.”

Last year at Pocono Raceway, their relationship on much better terms, Harvick approached Chastain on pit road following the race with advice after aggressive driving by Chastain resulted in contact with Christopher Bell and a cut tire.

“Hey man, you realize if you just back off one notch, you were going to finish fifth or sixth today,” Harvick told him.

A version of this advice was echoed to Chastain earlier this year by his new team owner, Justin Marks:

After a decade in the sport going all-out because he believed his career depended on it, this is the most secure Chastain’s ever been. He’s not going to lose his job over one day of bad driving.

But you can’t just flip a switch on a mindset you’ve inhabited for the better part of a decade. It’s a process.

Chastain has been working at keeping himself “neutral” no matter the highs or the lows.

“It’s not easy, but that’s the whole point, right?” Chastain said earlier this year. “You have to work at it. It’s not easy in the car to not get excited when I take the lead. It’s not easy to [not] get down whenever I lose the lead.

“It’s not. It’s hard. This stuff is hard. Mentally thinking the right things for me in those moments are so challenging, and it’s something that I’ve just had to work at. No different than doing push-ups or air squats or running or biking. Mentally, I have to work at it because I’m not good at that. …

“From an early age, I felt like guys I would race against a lot of times tried too hard, but I could race with anybody growing up, and mentally, I didn’t realize that until the last few years that that’s a job. That’s a workout. That takes effort.”

That effort involves potentially learning some lessons dealt out by his veteran competitors.

Which brings us back to the Thunderdome!

At some point, Hamlin plans to get payback against Chastain when he least expects it on a “meaningful” day.

Weirdly, Justin Marks is stoking the fire of this “rivalry” or whatever we want to call it.

💭 "There's a lot of time we spend telling everybody what we're gonna do and not a lot of time doing it. If they wanna play, it'll be fun." 🍿 pic.twitter.com/idZJkUvsqu

“Honestly, I’m here for it. I’m ready,” Marks said Monday on SiriusXM NASCAR Radio. “I mean, Denny’s texting me right now as we’re talking actually. It’s the drama, the controversy. … I guess there’s a lot of talk in this board, right. There’s a lot of time we spend telling everybody what we’re going to do, and not a lot of time doing it. So if they want to play, it’ll be fun.

Marks, a former NASCAR driver himself, described finding the right level of aggression as a “dance.”

“I want both of my guys to be to be aggressive,” Marks said. “The balance that all these guys have to learn or continue to learn through their careers is sort of like risk versus reward. At what time during the race and during the season are we going to pick our battles? … Ross is so early in his career in spending time at this level, like in the top five, the top 10. I think that the more time you spend there, you kind of understand when to push the button or when not to push the button or when to wait, and when it’s worth it, not worth it.

“I want these guys to go fight for everything that they can fight for. And then let it kind of self-police a little bit on the racetrack.”

How convenient that Denny ‘forgets’ the number of times he has pushed drivers out of his way…or into the wall. Chase Elliott, Bristol? Guess his memory is only long when HE decided HE has been wronged, not the other way around.

It’s another example of “Do as I say, not as I do.” Just like Tony Stewart complaining about blocking.

I would rather have Chastain in my car than a whole lot of the others. It is racing not pacing. Be aggressive and live with it.