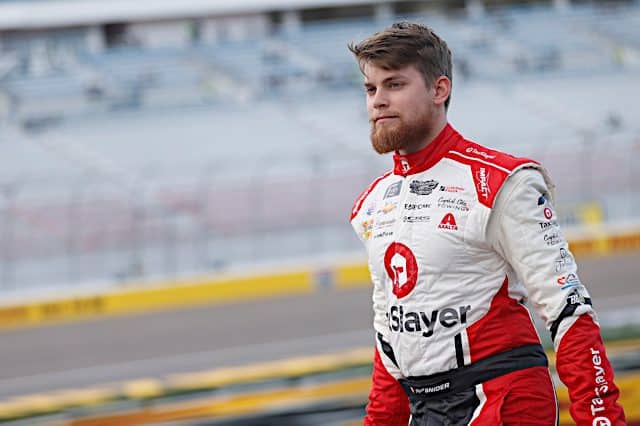 Never in any of the top three NASCAR national series has an entire playoff field been comprised solely of winners, which makes a NASCAR Xfinity Series driver most have overlooked that much more dangerous over the next two months: Myatt Snider.

Admittedly, Snider and the No. 31 Jordan Anderson Racing team haven’t lit the Xfinity Series world on fire. There is no denying that.

Saturday’s second-place finish in the inaugural Xfinity race at Portland International Raceway was Snider’s first top five of 2022. He has only scored three other top 10s thus far, coming at Circuits of the Americas (sixth), Talladega Superspeedway (ninth) and Charlotte Motor Speedway (10th).

Notice a subtle pattern? Snider has scored a pair of top-six finishes at this season’s road courses. People familiar with Snider’s career know that the 27-year-old Charlotte native spent a season in Europe racing in the NASCAR Whelen Euro Series in the Elite 2 division. Fresh off his rookie campaign in the Camping World Truck Series in 2018, where he won Rookie of the Year, Snider was out of a job when ThorSport Racing announced Johnny Sauter was returning to the team for the 2019 season.

Snider competed in the entire 2019 Whelen Euro Elite 2 in the No. 48 Ford for Racing Engineering, finishing sixth in the final standings. The 13-race calendar was comprised of six road course doubleheader weekends and a single oval event. During the six road course doubleheader weekends, he improved in race number two in four of them. However, in the two he didn’t improve, the fall-off wasn’t that poor. At the end of the season, his average finish in the first race was 12.2, and he averaged a 6.5 in race number two.

Returning stateside for 2020, Snider put together an entire season of Xfinity competition, splitting his time between Richard Childress Racing and RSS Racing. The COVID-19 pandemic jumbled the schedule and reduced the number of road courses that season from five to four while introducing one new circuit entirely. He drove for RSS in all four starts, which doesn’t have the best record on road courses. Snider finished ahead of teammate Ryan Sieg in three of four races, with the best finish of 10th at the Daytona International Speedway road course, the replacement race for Watkins Glen International.

See also
Eyes on Xfinity: Ryan Sieg Down but Not Out

Seven road course races were a part of the 2021 Xfinity season, and Snider was full time for RCR that season. Snider didn’t set the world on fire then but ran better than the final result. Five of the seven races resulted in a top-15 finish, including a seventh at the Indianapolis Motor Speedway road course.

As of Portland, Snider has a total of 80 career Xfinity starts. There are several tracks he has visited five times and some as few as one. Of the 80 starts, 13 of them are on road courses. Despite a small percentage of his total starts, six of his top-10 best tracks are road courses.

Rewinding to Saturday (June 4), Snider qualified 25th but fell back on the initial start for unapproved adjustments. Surviving the chaos of turn 1, Snider methodically worked his way forward. The race restarted following a caution for debris, and Snider was inside the top 10.

After the race leaders encountered off-track excursions of some type, Snider was soon on the back bumper of new leader Andy Lally. With four laps to go in stage two, Snider’s car was clean, and he took the lead from Lally.

Snider won stage two, and with modified pit stops taking place, as the race was an Xfinity standalone event, he maintained the lead and restarted the third and final stage as the leader. He survived that restart and the next and led through lap 62 of 75.

There is little doubt that Snider had the car to beat if it wasn’t for AJ Allmendinger being right on his taillights on the final restart with four laps to go. Into turn 4, Allmendinger stuck his nose on the inside of him and roughed him up just a bit, and by turn 6, Allmendinger had taken the lead.

Allmendinger’s drive Saturday was spectacular and should be praised. He had several moments where his entire car left the racing surface. He was even down one lap in stage one. But with four laps to go, there he was, chasing down Snider. Allmendinger did with his car what stock cars were intended to do — unlike his open-wheel machine back in 2006 at Portland — use the bumper.

Snider’s drive Saturday is buried due to Allmendinger doing Allmendinger things. It seemed like the culmination of the narrative beginning when he lost his 2019 ride with ThorSport and resorted to racing in Europe. Whatever the reason, it’s no secret that Jordan Anderson Racing has struggled in 2022. Yet, should we be surprised at Snider’s results on the road courses? Maybe, but maybe not.

No matter your opinion of stage racing, let alone stage racing on road courses, it has opened the door for road course races to be more of a wildcard race, not unlike a superspeedway. Snider’s chances of winning on a traditional intermediate or speedway oval are slim, but he ought to circle the three remaining road courses in the regular season: Road America (July 2), Indianapolis (July 30) and Watkins Glen (Aug. 20).

These are his and Jordan Anderson Racing’s best chances for making the playoffs. He’s only 98 points out of 12th (Sieg), but can Snider and JAR outpace Sieg, the three Our Motorsports Chevrolets, Brandon Brown and the floundering but fast Sheldon Creed? It’s improbable. He’s going to need a little bit of luck.

And that luck may just come at a road course. Running in the midfield like Snider does requires a certain level of patience. While others ahead of him have issues or make mistakes, patience can elevate him a few positions late in a race. But on a road course, patience can be very rewarding. Front runners wrecking themselves or making mistakes occur in seemingly every Xfinity race on a road course.

I’d watch out if Snider were in the first few rows in a late-race restart. His past four road course races dating back to 2021 have been top 10s. A road course win could be right around the corner.