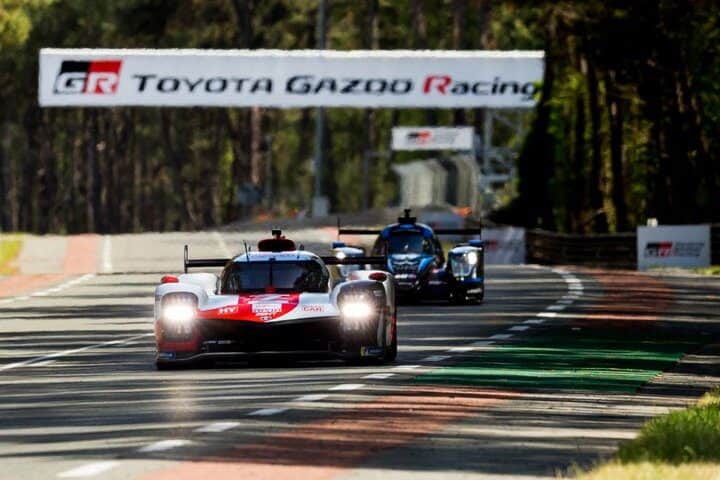 Wednesday evening saw FIA World Endurance Championship teams qualify for this weekend’s 24 Hours of Le Mans.  After 60 minutes of on-track action, Toyota GAZOO Racing’s Kamui Kobayashi was fastest overall with a lap at 147.077 mph.  That does not give Kobayashi the overall pole, but does give the rest of the Hypercar class something to shoot at.

While the session was scheduled for a full hour, it truly lasted for about half of that time before rain showers arrived at the 8.467-mile circuit.  With no way to improve on a wet track, most teams spent the second half of the session in their garage.

Kobayashi’s lap was a little more than a tenth of a second quicker than Scuderia Cameron Glickenhaus’ Olivier Pla.  Pla’s teammate Ryan Briscoe was third quickest in the No. 709 Glickenhaus, while Signatech Alpine’s Nicolas Lapierre was fourth.  Brendon Hartley was unable to get a clean lap before the rains came and ended up 13 seconds back, fifth in class.

In LMP2, Team WRT’s Robin Frijns was fastest with a lap at 145.219 mph, good for fifth overall.  Frijns’ lap was nearly a quarter of a second faster than JOTA Sport’s Antonio Felix da Costa.  RealTeam by WRT’s Norman Nato was third fastest, then the United Autosports entries driven by Alex Lynn (No. 23) and Filipe Albuquerque (No. 22).  Prema’s Louis Deletraz was sixth fastest, three-quarters of a second slower than Frijns.

In GTE-Am, one of the most closely watched teams out there is the No. 93 Proton Competition Porsche 911 RSR-19.  This car was due to be qualified by Michael Fassbender, best known for playing the title role in the Steve Jobs biopic, along with roles in Prometheus, 300, and the Magneto role in a number of X-Men films.

Fassbender has been racing in the European Le Mans Series and is making his Le Mans debut this year.  Qualifying didn’t go well as Fassbender crashed his Porsche under braking for the first chicane on the Mulsanne Straight, bringing out a red flag.  He ultimately qualified 57th overall.

Northwest AMR’s Nicki Thiim was fastest in GTE-Am with a lap at 131.069 mph, seventh of all GT teams and 36th overall.  Thiim’s lap was nearly a full second faster than the Ferrari of Kessel Racing’s Mikkel Jensen.  AF Corse’s Nick Cassidy was third fastest, followed by Rahel Frey in the Iron Dames Ferrari.  Dempsey-Proton Racing’s No. 77 Porsche for Harry Tincknell was fifth, while Vincent Abril in the No. 61 AF Corse Ferrari was sixth.

TDS Racing x Valliante’s Mathias Beche and Spirit of Race’s Gabriel Aubry did get on track, but failed to set representative times in the session.  This is because of the red flag early on, the aforementioned rain and both drivers having multiple laps invalidated due to track limit violations.

The top six teams in each class (all five in the Hypercar class) will advance to the Hyperpole session, scheduled for 2 p.m. ET Thursday.  The session will be streamed live on MotorTrend+ (subscription required).  The remainder of the starting grid has already been set by this session.