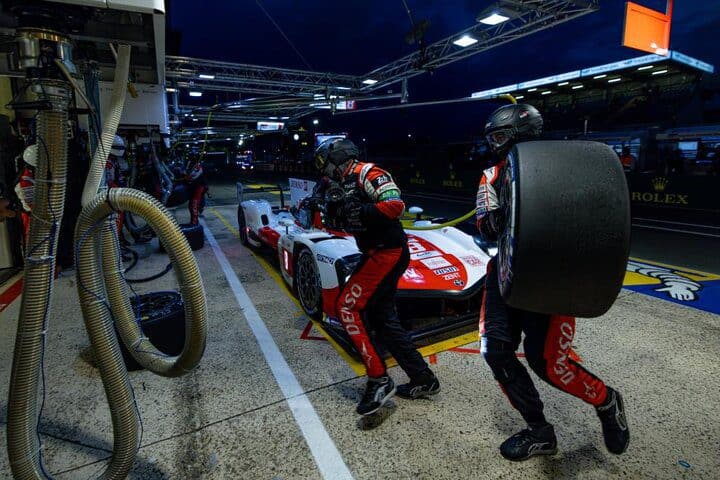 Toyota GAZOO Racing’s Brendon Hartley claimed the pole for this weekend’s 24 Hours of Le Mans Thursday (June 9) with a lap at 149.119 mph on his final lap of qualifying.  It is Toyota’s sixth straight overall pole at Le Mans.

During the 30-minute Hyperpole session, laps being eliminated due to track limit violations were common.  31 separate laps were invalidated due to track limit violations.  Some were cool down laps, but others were laps at speed.  Popular places for drivers to go out of bounds included the final chicane and the exit of Tertre Rouge.  None of the 11 prototypes managed to get through the session without having a lap deleted.  Only four of 23 Hyperpole participants avoided penalties.

Due to all the penalties, Signatech Alpine’s Nicolas Lapierre was in good position to claim the overall pole in the closing minutes.  However, both Hartley and Kamui Kobayashi put up their best laps of the week to take that away from him.

Hartley claimed the overall pole by four-tenths of a second over Kobayashi.  Lapierre was third, followed by Scuderia Cameron Glickenhaus teammates Ryan Briscoe and Olivier Pla.

In the LMP2 class, Team WRT was able to hold onto the pole position from Wednesday’s qualifying session.  Robin Frijns qualified at 146.267 mph to earn the pole and the sixth starting spot.  Frijns’ lap was 1.676 seconds faster than United Autosports’ Filipe Albuquerque, who improved right at the end of the session.  JOTA Sport’s Antonio Felix da Costa qualified third, then Realteam by WRT’s Norman Nato.  Prema’s Louis Deletraz moved up to fifth in class.

GTE-Pro will have a Corvette Racing one-two on the grid as Nick Tandy won the class pole with a lap at 132.536 mph.  The lap was .192 seconds faster than teammate Antonio Garcia.  Porsche’s Frederic Makowiecki qualified third, ahead of provisional pole sitter Laurens Vanthoor.  AF Corse’s Antonio Fuoco qualified fifth.

In GTE-Am, AF Corse’s Vincent Abril won the class pole with a lap at 131.049 mph.  He ended up .157 seconds ahead of the similar Ferrari of Kessel Racing’s Mikkel Jensen.  Dempsey-Proton Racing’s Harry Tincknell qualified his Porsche third in class, then the Aston Martin of provisional pole sitter Nicki Thiim.  AF Corse’s No. 54 Ferrari of Nick Cassidy qualified fifth.

Outside of the near constant track limit penalties, there were no incidents during the 30-minute session.

With Hyperpole now complete, the full 62-car starting grid is now set.   There are a number of teams of varying interest in the field.  Dane Cameron will start the Team Penske LMP2 ORECA 07-Gibson 14th overall.  Ricky Taylor will be in the COOL Racing No. 37 that will start 17th (12th in LMP2).  Sebastien Bourdais with Vector Sport and Steven Thomas with Algarve Pro Racing will start at the back of LMP2 due to not participating in qualifying on Wednesday.  Cooper MacNeil will start 47th overall (10th in GTE-Am) in the WeatherTech Racing Porsche, while Ben Keating will start the TF Sport Aston Martin 56th overall.