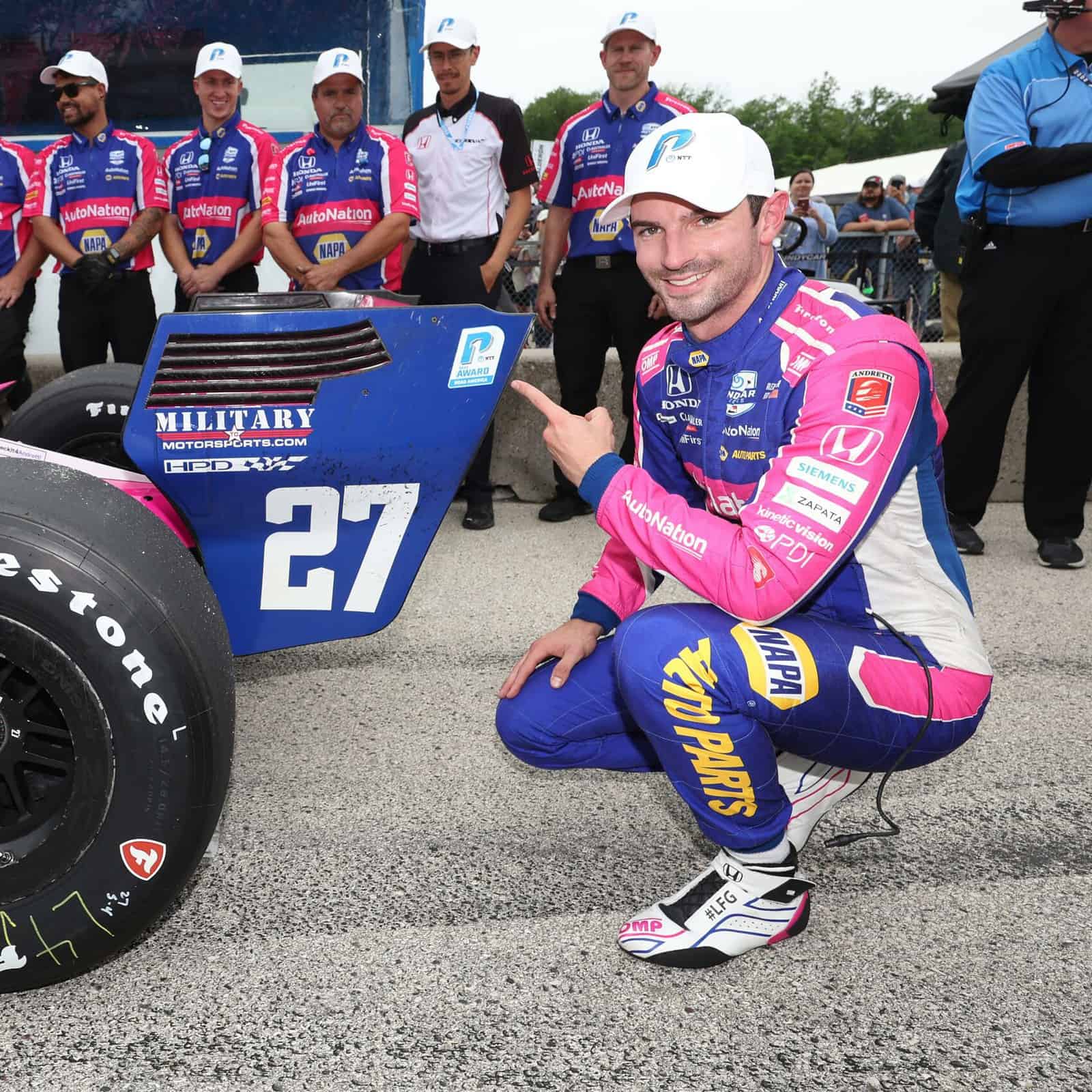 ELKHART LAKE, Wis.— Getting a sticker makes everything better.

After earning his first NTT IndyCar Series pole position in three years and the new NTT P1 trophy that comes with that accomplishment, Alexander Rossi had only one concern.

“Do I still get a sticker, though?”

After NBC’s Marty Snider answered Rossi that yes, he does indeed get a sticker, then Rossi was even further elated.

Road America was the site of Rossi’s most recent IndyCar win in 2019 and the California native will lead the field to the green flag for Sunday’s (June 12) Sonsio Grand Prix at Road America.

Rossi will share the front row with 2018 Road America winner Josef Newgarden. Newgarden’s No. 2 Team Penske Chevrolet was  .0715 seconds slower than Rossi and qualified on the red sidewall alternate compound that Firestone offers. Rossi turned his pole-winning lap on the black sidewall primaries, doing the same thing Newgarden did last year to win the pole at Road America.

That massively surprised the Tennessee native.

“I thought he (Rossi) was on used reds with everyone else,” a surprised Newgarden said on pit road. “I’m surprised he was able to make that work on the blacks, to be quite honest. In my opinion, I thought it was clear we were going to go used reds, they just seemed significantly better this year than last year.”

Rossi’s path to pole position started in the first group of the first round of qualifying. The 2016 Indianapolis 500 winner was second fastest in that group to his Andretti Autosport teammate Romain Grosjean. The top six advanced to round two of qualifying against the fastest six from group two.

In the second round, Rossi was the final car to advance through to the Firestone Fast Six by setting the sixth-fastest lap in that round. Eight more minutes of green flag running were all that stood between Rossi and his first pole position since Detroit in 2019.

Rossi’s success comes after being the fastest car in Friday’s (June 10) sole practice session and fourth in the Saturday morning practice. However, in the Saturday morning session, there was an issue with the clutch. In order to leave the pits, Rossi had to have the rear wheels of his car spinning in the air before a mechanic at the rear of the car lowered the rear wheels onto the ground so the car could move.

Rossi’s crew has dealt with worse situations during the year, so a clutch issue wasn’t as big of a problem as it could have been. Going faster than the other 26 cars was the larger concern for Rossi since qualifying has been full of interesting results from venue to venue.

“It’s hard. It’s really hard work,” Rossi said. “I don’t know how else to explain it. Especially now that we’ve kind of had this package for a while, it’s not only the driver level that’s good, like a lot of teams are good, too. Then it just comes down to the day.

“Like Josef mentioned, we were dialed in for blacks, and blacks happened to be possibly the better tire today and it worked out. As he (Newgarden) also said, there’s no guarantee tomorrow. We’ve got to get it done.”

The Sonsio Grand Prix at Road America will air live on NBC with the broadcast starting at 12:30 p.m. ET and the green flag coming out at 12:55 p.m. ET.

DeHARDE: Will Power Needing To Power Through The Field Once Again