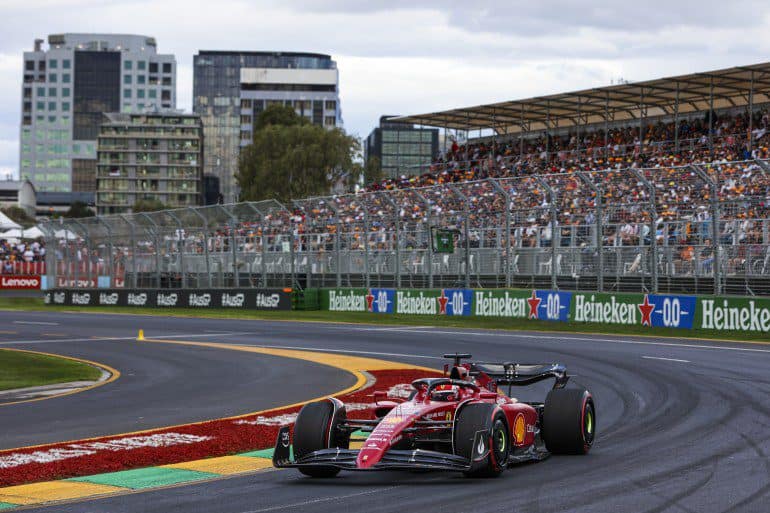 Charles Leclerc is on pole for Formula One’s 2022 Azerbaijan Grand Prix after going 1 minute, 41.359 seconds in the third round of qualifying Saturday (June 11).

It’s his fourth straight F1 pole and sixth of the season.

”It feels good,” Leclerc said after the session. “This one, obviously all pole positions feel good, but this one I probably did not expect it because I thought Red Bull was stronger, especially in Q1 and Q2. I really struggled to see that we were faster, but then in the last lap everything came together and I managed to do a good lap… so extremely happy.”

Leclerc went two-tenths of a second quicker than Red Bull’s Sergio Perez, while Max Verstappen starts third. Leclerc’s Ferrari teammate Carlos Sainz didn’t get out right behind Leclerc as his crew had to add more fuel to the car. As a result, he didn’t receive a slipstream and qualified in fourth place.

George Russell will be the highest-starting Mercedes in fifth, while Pierre Gasly slotted in sixth. Lewis Hamilton will start seventh with Gasly’s Alpha Tauri cohort Yuki Tsunoda in eighth. Sebastian Vettel and Fernando Alonso round out the top 10 on the grid.

The first part of Q3 saw the Ferraris of Sainz and Leclerc shoot to the top of the board, while Perez and Verstappen were slightly slower. But in the end, Leclerc snagged the pole over Red Bull.

No incidents occurred in the third session.

A few incidents occurred in Q2. Early in the session, Vettel’s tires locked up heading into a turn, causing him to nose into the barrier. He backed up and continued on, radioing to his team to check the brakes.

Hamilton was posted by the stewards for driving unnecessarily slow and eventually got into the top 10 late in the session, thanks to a tow from his teammate Russell. Hamilton will be investigated after qualifying.

A couple other cars had incidents which briefly brought out yellows in different sectors, including Lando Norris, who went off track. He spun around with no harm done, though.

Norris, Daniel Ricciardo, Esteban Ocon, Zhou Guanyu and Valtteri Bottas did not make it out of Q2 and will start 11th-15th, respectively.

In Q1, Sebastian Vettel went off track in turn 3 but quickly spun around in the runoff area and went back on track. Later, his Aston Martin teammate Lance Stroll had a front lock up and nosed the barrier. Stroll continued on, and as he went through the course, he hit the wall again and slammed the right side wall in turn 2, bringing out the red flag. The damage was much too severe and he was knocked out of Q1.

The Mercedes had floor board issues that also needed work before qualifying began, as the cars were porpoising in practice.