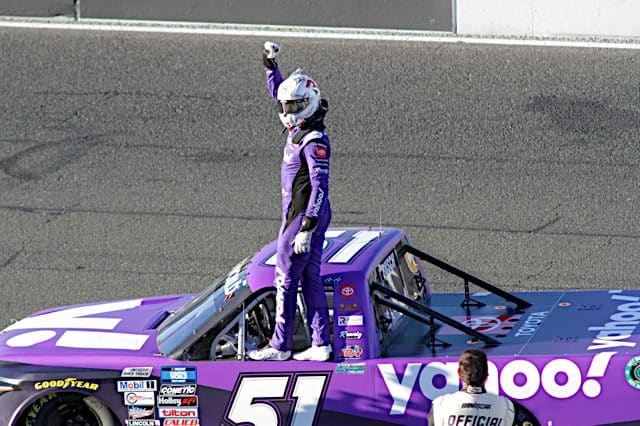 Busch got by Ross Chastain in stage two and only relinquished the lead to others when he pitted.

It’s his first Truck victory of the year and 62nd of his career.

“It was good,” Busch told FOX Sports 1. “Just continuing to work on the truck and make it better. Appreciate Yahoo and everybody that’s made this partnership possible with Toyota and TRD. This Tundra TRD Pro was awesome today, really proud to drive it. We had a struggle at Charlotte [Motor Speedway] a couple weeks ago, but today was really good.

“Awesome adjustments by Mardy [Lindley, crew chief] and all the guys here to get us in position to be able to win today. Yesterday was ugly, I wasn’t sure about it, I didn’t feel good about the truck. They worked on it all night long, and we made some brake changes, we made some chassis changes. These guys never stopped, so we try. As hard as it might seem sometimes, I know the effort’s there.”

Zane Smith placed second after a late surge to the front, while ThorSport Racing’s Ty Majeski was third. Chastain and Chandler Smith rounded out the top five.

Daniel Suarez, who filled in for Carson Hocevar at about halfway through stage one, placed sixth in the No. 42. Hocevar, who won his first pole, crashed in qualifying and was forced to drop to the rear of the field at the start of the race. He came to pit road on lap 11 for a driver swap with Suarez after breaking his right tibia in a crash at World Wide Technology Raceway at Gateway last week.

The race started with Chastain shooting out to an early lead ahead of Busch and Majeski. Though there was some action throughout the field, there was only one spinout by Stewart Friesen as the racing was clean all around, featuring a tight battle for the lead. Even Friesen recovered without penalty, cracking the top 10 by stage two after getting his lap back.

As the laps wound down in stage one, Chastain, Busch and Alex Bowman pitted just before the end of the stage, surrendering the lead to Majeski. Ankrum started challenging the No. 66 for the lead on the final lap, but Majeski held him off to claim his first stage win of the year.

In that mid-race break, several trucks had some penalties and troubles on pit road, including Nemechek, who had a slow stop, and Harrison Burton, whose hood was up. FOX Sports reported that the No. 17 truck was down on power.

Stage two saw a bit more action, at least the first couple of laps. On lap 26, Grant Enfinger got into the back of Friesen, hit a curb and spun around with no harm done. The same couldn’t be said for Christian Eckes, however, as he got turned while racing with Nemechek. He slid through the dirt and hit the wall, suffering too much damage to continue.

Just before Eckes crashed, Busch took the lead from Chastain on lap 27. And with about six to go in stage two, Ankrum got by the No. 41. Bowman followed suit a few laps later.

As was the case in stage one, the leaders played some pit strategy. Busch, Ankrum, Chastain and Bowman all pitted just before two to go in stage two. This left the door open for ThorSport’s Ben Rhodes, who claimed the stage win by over three seconds. Unfortunately for Ankrum, he had a penalty during his stop and had to restart at the rear.

The No. 51 once again shot out to the lead in stage three while others jostled for positions further in the pack. A few drivers also encountered issues while fighting for position. First, Todd Bodine got spun out by Dean Thompson. Soon after, Matt Crafton had a mechanical issue and was forced to bring his truck behind the wall.

Then, with about 15 laps left, DiBenedetto got into Friesen as they went through turn 11, sending one of the stacks of tires bouncing a bit off track.

Nearly everyone pitted during this caution except for Rhodes, Derek Kraus and Chase Purdy.

Rhodes held the lead for a few turns but locked the tires around the chute and went wide, allowing Busch to easily pass him for first. Also, Kraus got turned around in that same spot and drivers scattered around the No. 19.

Soon after, Hailie Deegan cut down a tire and hit the wall hard, suffering major rear-end and right-side damage. She got it re-fired but not before the caution flag flew with about 10 laps remaining.

About a lap after the race restarted, a big crash occurred between Josh Bilicki and Friesen just after they passed the start/finish line.

Multiple trucks involved in a big crash at Sonoma Raceway. We are under a red flag as they work to reset the wall in Turn 1.

Replays appeared to show Bilicki’s No. 30 was hit by Friesen into the left side wall. The truck came back across the track and into the right-side wall, resulting in major front end damage. Friesen’s car caught fire briefly, while Bowman and Lawless Alan also caught a piece of the incident.

Friesen and Bilicki both were out of the race while officials halted the event to repair the wall.

In the end, no one could challenge Busch for the victory in his final Truck race of the year.

Trucks are back in action next Saturday, June 18, at Knoxville Raceway. Television coverage for the Clean Harbors 150 starts at 9 p.m. ET on FOX Sports 1.

I missed the race. Did Chastain ever challenge Kyle !