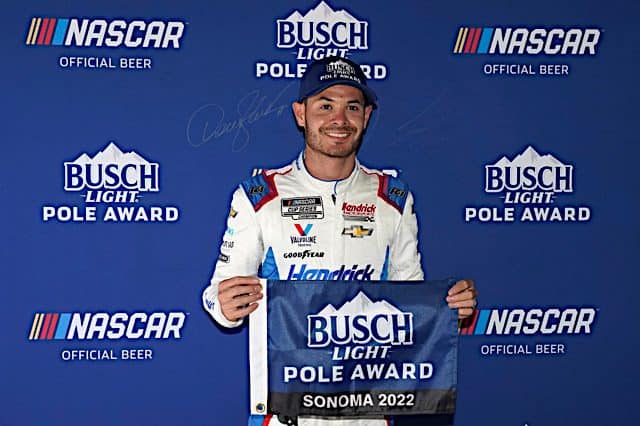 Kyle Larson grabbed the pole for the NASCAR Cup Series Toyota/Save Mart 350 at Sonoma Raceway after laying down a fast lap of 92.111 mph in the second round of qualifying Saturday (June 11).

Larson, who was fast all afternoon, snagged his second pole of the season, 12th of his career and unofficially his fifth straight at Sonoma. He was awarded the top starting spot last year via the algorithm used when there was no qualifying, so that one doesn’t count toward his career stats.

“It was good,” Larson told FOX Sports 2. “I was a bit surprised I ran that 70-something that I ran because I felt like I gave up a lot of time in turns 4 and 7. Had I had those two corners back, I feel like I could’ve run quite a bit faster. Really good Hendrickcars.com Chevy, thanks to everybody on our team and everybody back at the shop, engine shop. Excited about it.

“For Chase (Elliott) to lay down that lap he did, I feel like that shows how strong he is, because he was really good in race trim too. I’ve got to figure some things out on my end, I think my car is capable of racing good, I just gotta get a little bit better on the long runs and hopefully have a good shot.”

It’s an all-Hendrick Motorsports front row, as Elliott was about two-tenths of a second slower than Larson in round two. Chris Buescher, Michael McDowell and Tyler Reddick rounded out the top-five qualifiers.

Kyle Busch, who was second-fastest in practice, starts 12th after just missing the cut in group B.

Cody Ware did not make a qualifying lap, as the No. 51 Rick Ware Racing car failed pre-qualifying inspection four times. Additionally, he’ll serve a pass-through on pit road at the earliest time he can, plus his engineer Steve Gray was ejected for the rest of the weekend. Further L1 penalties will be announced in the penalty report next week.

Cody Ware car didn't make it thru tech before practice started and with officials needed on pit road, won't go through tech until after qualifying. They've failed 4x so that likely will be 10pts in addition to not being allowed to post qualifying lap & pass-thru after first lap.

Another team failed pre-qualifying inspection twice: Scott Heckert‘s No. 78 of Live Fast Motorsports. Engineer Chris Stanley was ejected from the track for the weekend.