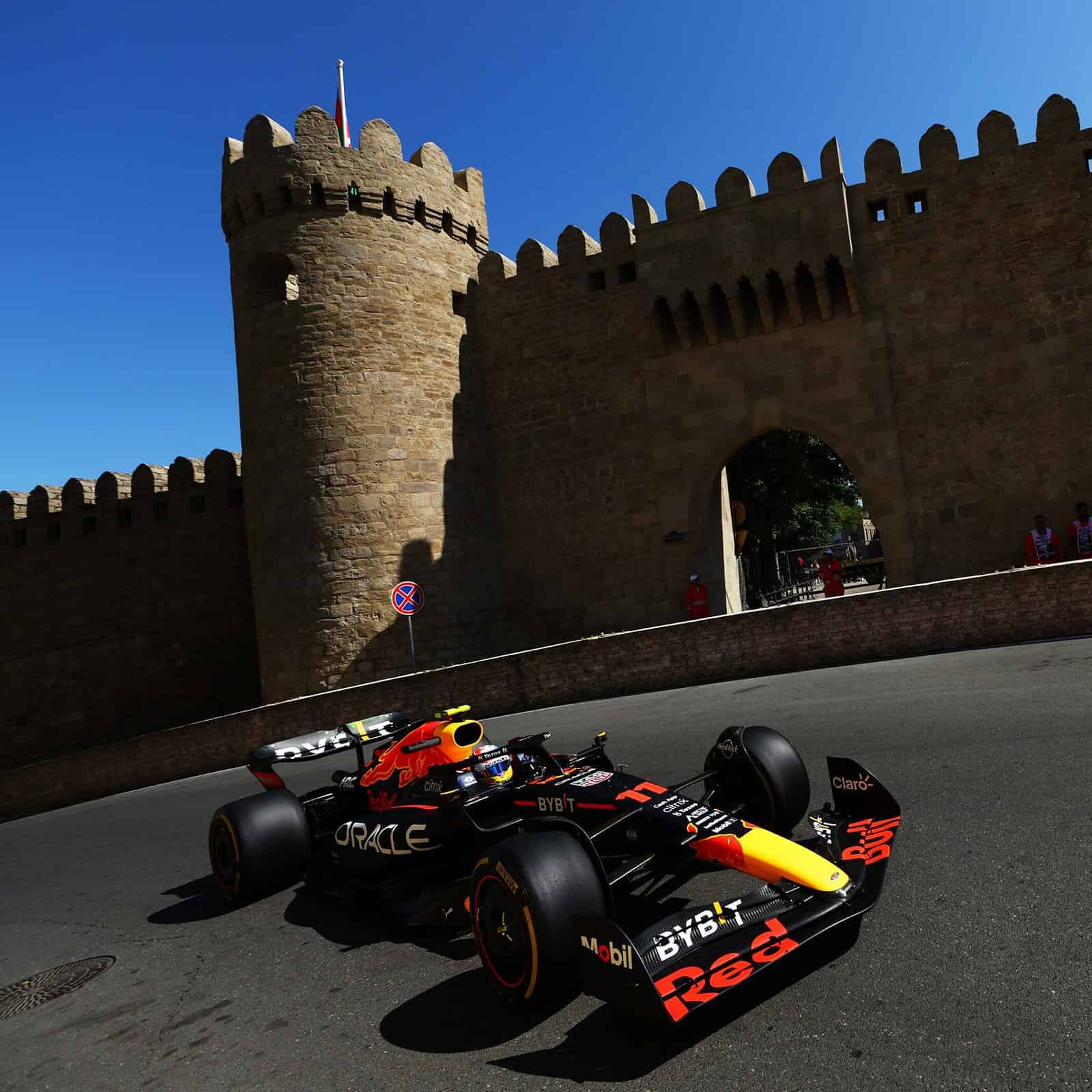 Formula 1 has landed in Baku, Azerbaijan this weekend (June 11-12) for what has become a wild stop on the calendar.  Making its debut in 2017, the Azerbaijan Grand Prix elicited tempered expectations with pundits and fans thinking the track would not be able to allow for enough overtaking, that its DRS zones were too long and narrow, and that tight corners would not encourage enough close racing.

It turned out everyone was wrong.  From the very first race, the track has provided both wonderful and bizarre theater for all sorts of strange occurrences.

In 2017, Sebastian Vettel, first in the standings and second in the race, popped Lewis Hamilton while under the safety car.

Vettel earned a 10-second stop-and-go penalty that undid his race while Hamilton’s headrest came undone. He was forced to pit by the FIA, leaving both of them out of the running for the win (Daniel Ricciardo capitalized and took the checkers).  Behind him, Lance Stroll somehow pulled a podium finish out of his tailpipe in a lovely result for Williams.

In 2018, teammates Max Verstappen and Ricciardo played bumper cars down the main straight.

Verstappen, in fourth, with Ricciardo trailing drove their own race that seemed to be one completely separate from the rest of the field and the ensuing calamity surely contributed to Ricciardo’s decision to leave Red Bull at the end of the year.  Of course, his record-breaking eight DNFs for the season did not help, either…

In 2019, the GP nearly held to typical F1 form, with pole sitter Valtteri Bottas earning the race win.  Of course, the event still brought a bit of humor when Ricciardo and Daniil Kvyat skimmed off each other, leaving both coming to a stop.  Ricciardo, however, in a rush to rejoin the race backed into Kvyat, leaving both cars limping to the pits and retired.

In 2020, COVID-19 precautions wound up canceling the event.  In 2021, tire failures became the story, as a number of drivers endured issues. There was the notable incident of Verstappen blowing out his Pirelli and then banging into the barriers on the frontstretch.  The ensuing mess and required fixes to the safety barriers caused a red flag that ended when the GP resumed with a standing start.

Sergio Perez took P1 and Lewis Hamilton easily overtook him, only to be felled by selecting the wrong brake mode and failing to make the first turn.  He dropped to the rear as a result, handing the win to Perez, the second of his career.

So if history has given a glimpse of what to expect for the race, then the answer is chaos.  Something about the track and the driverʻs attitudes creates an air of near absurdity and there is little reason to think that won’t happen again.  Seeing Lando Norris spin in FP2 in what looked like a clean lap gives all the credence needed for such an assertion.

– The battle at the front is again between Red Bull and Ferrari.  The twist here is that it is again Sergio Perez leading the way for Red Bull and giving Charles Leclerc reason to believe he will be scrapping for all he can.  Ferrariʻs poor race management at Monaco is the type of situation that can erode confidence in a driver; seeing Red Bull again so close on the timesheets does not help in restoring it.

Verstappen has yet to make Baku his personal playground, like he has at other tracks, so this race is a unique opportunity for Leclerc to score the win and position himself to battle the defending champion as the series gets close to its run of European circuits.

– Mercedes altered their emblem on both cars in recognition of Pride Month.

We’re proud to be running the @MercedesBenz Pride Star on our W13s for the next three races, celebrating the LGBTQ+ community and raising awareness for Pride Month 🙏 pic.twitter.com/WbMNiC8L8O

The move can easily be considered a performative nod to the queer community and requires little in the way of complex work.  However, no other team has made such adjustments or acknowledgments as the month gets underway.  Hamilton even opined that Mercedes should keep the emblem as it now is for the rest of the season.

Some of the criticism has mixed in with questions about the car’s performance.  It’s easy to say for some, why worry about Pride when the team should be focused on making the car better?  In reality, the graphics, marketing and engineering department have no overlap and each one is still trying to do their best.

Another thought may be: Who cares? But that is an important aspect as well.  Rather than thinking about punching down and aiming for marginalized groups, why not, as a manufacturer that comes from a sordid past with direct ties to Naziism, make a statement that punches up.  Recent studies have shown that 15-20 percent of Gen-Z identify as queer in some regard.  While the number may be up for debate, it is clearly a market worth cultivating.

– In conjunction, Sebastian Vettel continues to do his own thing.

Today, in celebration of #Pride, Sebastian becomes the first #F1 driver to appear on the front cover of @AttitudeMag. 💚

Aston Martin recognized Vettel for both his efforts and his allyship with the LGBTQ+ community. As the tweet above states, “Today, in celebration of #Pride, Sebastian becomes the first #F1 driver to appear on the front cover of @AttitudeMag. 💚”

Hamilton and Vettel are two of the most outspoken drivers on the grid and their stances often receive rebuke in one way or another.  However, their recent efforts seem to contrast with the new head of the FIA, Mohammed bin Sulayem.

Prior to the Monaco GP, Sulayem had been asked about drivers and their activism and responded: “Niki Lauda and Alain Prost only cared about driving. Now, Vettel drives a rainbow bicycle, Lewis is passionate about human rights and Norris addresses mental health.

“Everybody has the right to think. To me, it is about deciding whether we should impose our beliefs in something over the sport all the time.  I am from an Arabian culture. I am international and Muslim [but do I] impose my beliefs on other people? No way! Never.”

To think the head of the FIA would have an issue with people speaking out on topics like mental health, human rights or queer rights is difficult to digest and says more about his beliefs than it does about the FIA.  One reaction is that sports and politics should be kept separate but that is like saying that the earth should be kept separate from the solar system––the two are also entwined.