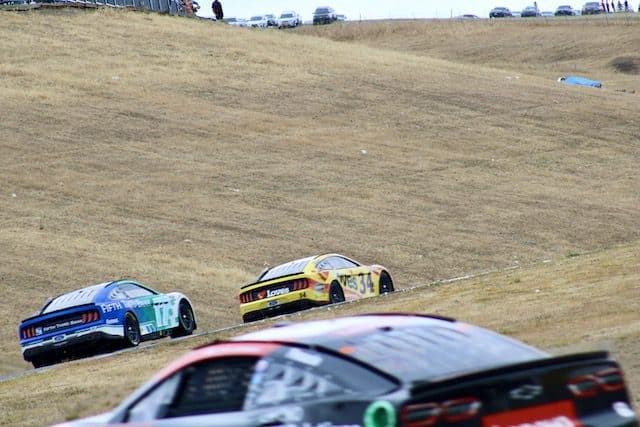 He was rushed to the Cup Series unexpectedly and he wasn’t really ready. Because of that, he lost his ride with Joe Gibbs Racing. He moved to Stewart-Haas Racing, another winning organization—until the sponsorship money dried up. He caught a ride with backmarker Gaunt Brothers Racing, barely hanging on, and then with an upstart, a team with potential but with a daunting task ahead. Some thought he was done after losing the SHR ride, but Daniel Suarez came roaring back in 2022 with Trackhouse Racing Team, now in its second year and now the second team in 2022 to boast wins for the entire organization.

Suarez dominated the second half in the Toyota/SaveMart 350 at Sonoma Raceway to hold off Chris Buescher for the win, leading a race-high 47 laps on the way and becoming just the fifth winner born outside the United States. He’s also the 40th driver to win in all three NASCAR national series.

Too many times, drivers with real potential are rushed to the top and then tossed aside when they don’t perform immediately. The move to an underfunded team is often a death knell for a career; drivers are labeled damaged goods after that. But Suarez defied the odds, coming back from the brink all the way to victory lane.

And don’t forget: Chris Buescher. Buescher fell just short of the first win for RFK Racing since Brad Keselowski joined the ownership group. On the way to his runner-up finish, Buescher led four laps and raced with Michael McDowell and Kevin Harvick for the spot (before Harvick suffered a pit error that took him out of contention). Those two are formidable road-racing veterans, but Buescher ran with them every step of the way. He’d like nothing better than to win a race not shortened by weather just to stop some people talking, and he’s been inching closer every week.

There wasn’t much love lost between either Chase Elliott or Denny Hamlin and Ross Chastain after Gateway, and the question on a lot of minds was whether Chastain had a target on his back Sunday.

It’s hard to make Chastain the bad guy here. He’s only in his second full Cup season and he’s learning how to race the leaders for wins. He’s also the kind of driver who never had anything handed to him, the kind who had to race for his next meal. That kind of driver tends to be aggressive, but also respectful of others, and Chastain, while he’s gotten over his head a couple of times with his aggression, hasn’t been disrespectful. He owned up to his inexperience, apologized and has expressed his desire to do better.

He handled the whole situation better than Hamlin, who took several shots at him in a Matt Kenseth-Joey Logano-esque (though admitted far less spectacular) attempt to ruin Chastain’s day. NASCAR’s inaction on Hamlin didn’t look good.

As it turned out, Chastain needn’t have worried; he raced Elliott for much of the race without incident, and didn’t get anything from Hamlin either. Is it still to come? Maybe, but Hamlin and Elliott also have plenty to lose, so this one may be over.

Polesitter and defending winner Kyle Larson ran up front for the first 26 laps, hoping to capitalize on last year’s winning strategy, but he was mired deep in traffic after the first stage and had to work his way forward. He was making headway but lost a wheel just after the final stop. That ended his chances to win and will earn crew chief Cliff Daniels a four-week suspension. Larson finished 15th.

Leading active road-course winner Elliott also had a car that could run up front. He, too, led 26 laps in one shot, but also had a pit mishap in the second half, drawing a penalty for pitting outside his pit box—a costly error that dropped him far off the lead pack. He bounced back to finish eighth, a showing of his skill in its own right.

COTA winner Chastain captured his first career win on a road course and this week watched his teammate do the same. Chastain didn’t lead a lap this time around and with his pit strategy gave up stage points, but it paid off with a seventh-place finish.

If you’re among the fans who love to see a driver get his first career win, then 2022 hasn’t disappointed. Suarez is the fourth first-timer this year, following Austin Cindric, Chase Briscoe and Chastain. And with the way Tyler Reddick has run at times, it’s entirely possible there could be at least five by the time it’s over.

It’s good for the fans and good for NASCAR. Suarez is the 12th different winner through 16 races. And the icing on the cake is that we’ve seen a lot of different names among the top 10, top 15.

When you can turn on a race and not be able predict the top finishers because they’re not the same guys all the time, that’s a win for the sport. If nothing else, the new car has given back some much-needed unpredictability.

The Cup Series is off for the only time this year this coming weekend, so don’t expect a lot of major happenings on that front, but keep an ear to the ground because while there have been no major Silly Season announcements yet, the first shoe is bound to drop relatively soon.

It could come out of Joe Gibbs Racing, with the most likely scenarios being Kyle Busch re-signing, possibly with a sponsor announcement, and/or Martin Truex Jr. making a decision on whether to race another year or retire from the driver’s seat. And don’t forget Christopher Bell as he’s also not yet signed for next year.

The other big team with an open seat is Stewart-Haas Racing, and who’ll fill that is still up for debate.

There could also be some lower-profile moves that will impact the decisions teams make. It may not happen this week, but that first domino will likely fall soon.

How… important is the Clash at the Coliseum?

NASCAR announced it would be back in 2023, but does it matter?

NASCAR’s Busch Light Clash is returning to the LA Memorial Coliseum on February 5, 2023 to start its 75th Anniversary season. We can’t wait to hear the roar of engines at the Coliseum once again! Visit https://t.co/l1cdIAOLRW to register for an exclusive presale opportunity. pic.twitter.com/TtJ04M3T0p

It was a fun race in 2022, but not a great one. There was enough extraneous pomp to make it a spectacle, not a word that can describe most NASCAR races, but it’s debatable whether race fans care about a spectacle or if those who came for the spectacle will stick around long enough to become real fans.

And while the race taps the L.A. market, it also taps out race teams. A couple of weeks before the Daytona 500 puts a halt to preparations for that race for several days. Sure, work continues at the shops back home, but without some key people.

Also, a cross-country trip is expensive. With fuel prices at an all-time high and no guarantee they’ll come down in six months, Daytona, where the teams will be going anyway, is a better option financially. NASCAR required all chartered teams to make the trip to California last year with no guarantee of making the main event, and that’s quite a hit to some smaller teams.

If NASCAR needs a pre-season race (and that’s a hard sell anymore), it would be better served either returning to Daytona (they could run the bullring that the Modifieds raced on to spice it up) or staying much closer to home. Remember, North Wilkesboro is tantalizingly close to the Cup teams’ home base. Martinsville’s only a couple of hours, too. Heck, take it to South Boston for something different.

But NASCAR, to borrow the words of songwriter Dave Loggins, L.A. ain’t your kind of town.

As someone who gets really tired of seeing the usual suspects from the big teams running up front, & contending for wins. It was refreshing seeing it come down to Suarez, Buscher, & McDowell contending at Sonoma.

You can say what you want about passing on road courses. But unlike super speedway passes, road course passes are hard fought, & they mean something.

So far this year, the road courses have proven to be equalizers. They’re no longer a Hendrick slam dunk.

My hat is off for Justin Marks, & what he’s been able to pull off so far.

“He was rushed to the Cup Series unexpectedly and he wasn’t really ready.”

He’s not the first and he won’t be the last. They are in for a rude awakening when they get to Cup and expect or are expected to win right away. The people who put them in Cup should know that.

RE: “If nothing else, the new car has given back some much-needed unpredictability.”
Exactly. Parts failures, mistakes, “Wil-Blo” tires, a dubious wheel, and no notes from past races all produce unpredictability, not parity.

If there is any race that gets a pass (I don’t care where they run) it’s the Clash. A meaningless race that I will always watch just because it has been almost 3 months since the last race. While I will always watch it on TV the only way I would attend is if it was less than an hour drive from where I live, or if I happened to be there for some other reason.

johndawgchapman
Reply to  Bill B

I expect the search for new locations for this meaningless race will ultimately lead to Go Kart track on Long Island.

I’m sure Hawai’i is being considered by the NA$CAR brain trust. Then they’ll come back to Daytona and then head to Japan.

China.
Another huge market that NASCAR will attempt to crack for years with no success.