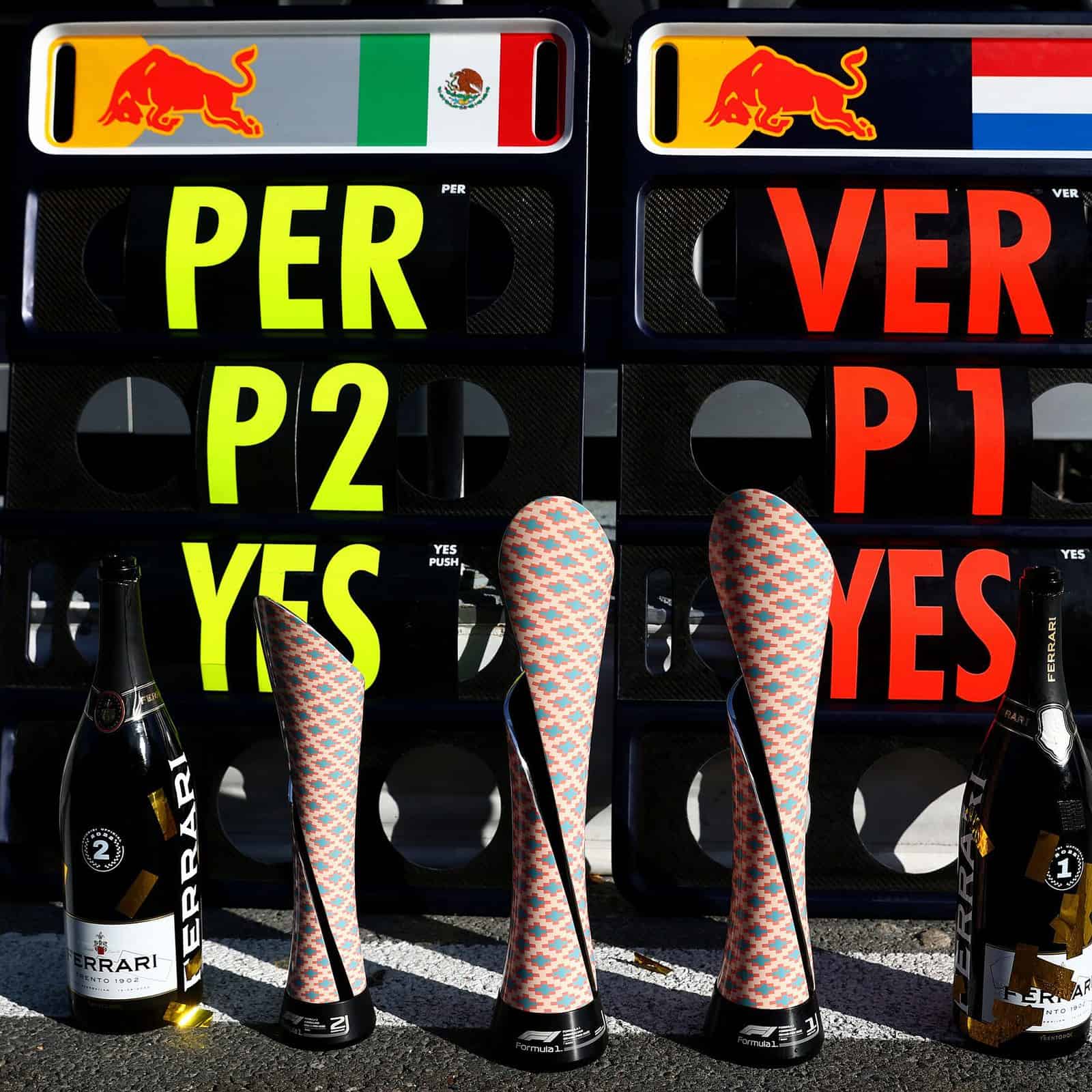 Max Verstappen cruised to the win at the Azerbaijan Grand Prix, maintaining the trend of the race producing a new winner every time it has been held.  The win is Verstappenʻs fifth of 2022 and 25th of his career, tying him with Jim Clark and Niki Lauda on the all-time wins list.  Verstappen now leads teammate Sergio Perez in the standings 150–129.

Perez moved into the lead at the jump but wound up second with a bonus point for fastest lap in what was a stellar day for Red Bull.  The team now leadʻs the constructorʻs standings 279–199 over Ferrari.

Mercedes also enjoyed a solid day with George Russell continuing his run of consecutive top-five finishes by grabbing a podium finish of third.  His team welcomed him to the paddock by calling him Mr. Consistency.  Lewis Hamilton took the fourth spot but struggled to get out of the car afterwards, looking troubled by a back undone by heavy porpoising.  Still, the points haul kept Mercedes in reach of Ferrari as they have accumulated 161.

Pierre Gasly earned his first best finish of the season by taking fifth.  In what has been a terrible run, the result is both a glimmer of hope and a specter of unfulfilled promise.  Sebastian Vettel also put together a stellar drive – even with a spin on lap 13 – and crossed the line in sixth, his best of 2022.

Fernando Alonso backed up his seventh-place finish in Monaco with another seventh-place finish.  Daniel Ricciardo earned just his second points-paying finish of the year by taking eighth, with teammate Lando Norris hounding him to the line and ending in ninth.

Esteban Ocon slotted in 10th, giving Alpine two pointʻs paying positions in what has been a challenging season so far.

From the moment the lights went out, Verstappen appeared to be an afterthought.  Sergio Perez pipped Charles Leclerc for the lead the order seemed to fall into a procession.  Perez had gapped Leclerc by over two seconds by lap five.  Carlos Sainz endured a hydraulic failure on lap nine and retired, his third of the season.  The resulting Virtual Safety Car shook up the fieldʻs approach to pit stop strategy, notably with both Red Bulls staying out and Leclerc coming in for tyres.

The attempt at a bold strategy by Ferrari looked to be a bit of a reach, with no need to press the issue against what either Red Bull was doing.  Whether the decision would have worked will be left to curiosity as it never played out.  On lap 21, with Leclerc holding the lead, his power unit failed and Ferrari found both cars out of the race.

The season had started well for the Prancing Horse but since the fourth race, ironically the Emilia Romagna GP at Monza, Italy, the team keeps finding fascinating ways to look bad.  Between bad strategy calls, failures, and questionable driving, the team looks nothing like it did to start.  Though the season is still only eight races old, Ferrari seems to be letting it slip away.

With both Ferrariʻs out, Red Bull found no challengers at the front.   The drama became centered on the midpack battles, as Verstappen had proven quicker and passed Perez for the lead after Leclercʻs DNF.

Even Kevin Magnussenʻs engine failure on lap 34 could do little to really change up the order even if teams again chose differing ideas about pitting.  The end result was Verstappen coasting to the win a ridiculous 20-seconds ahead of Perez.  Russell was yet 25-seconds behind Perez, offering insight into how strung out the top four had become.

Red Bull is playing a different game at this point.  Their cars are too good.  Their drivers are dialed in.  The pit calls are smart and the overall team is composed.  They have won the past five GPs and there is no reason to realistically believe that any team is going to provide a challenge that threatens their dominance.  They are not just good, but too good.  The only battle the team will have is one within itself as it plays the game of keeping both drivers happy.

For a track known for bringing about absurdity and unpredictable results, this time around seemed tame.  To expect the track to continually offer unusual events would be silly but something about visiting the Baku City Circuit has tended to bring something out of the drivers, cars, and teams.  Yet this trip seemed tame by comparison with the notable news being Ferrari power-unit failures.

– On lap 21, Leclerc bowed out when his engine decides it will go no further.  His second DNF in three races and highlighted that Ferrari is at its limit with their power units.  Leclerc is one example, Sainz another, but Valtteri Bottas, with a Ferrari engine in his Alfa Romeo, is already on his third of the season, and Zhou Guanyu parked his Alfa Romeo at the midpoint of the Azerbaijan GP.  If that was not enough, Kevin Magnussen, an early-season darling, joins the Ferrari DNF club when he parked his Haas on lap 34.  There had been questions about the Ferrari power unit and it certainly seems that the Maranello outfit has to work on reliability.

– George Russell is putting together an amazing season.  With all eight finishes coming in the top five, Russell is showing why he is the heir apparent at Mercedes.  While Hamilton has struggled with the new car, Russell is finding a way to work with it and eke everything out of the porpoising mess of an engineering conundrum.  Perhaps his youthful exuberance is helping him.  Perhaps jumping from Williams to a first-rate organization is helping.  Whatever it is, holding down fourth in the driverʻs standings is worth noting after his third podium finish of the year.

– Charles Leclerc must be at his wits end at this point, saying “We were in the lead of the race, I was managing the tyres well, we just had to manage the tyres and the race till the end, which I think was… we were definitely in the best position possible to do that. Another DNF – it hurts… We really need to look into that for it to not happen again.”

– Max Verstappen was asked about Leclercʻs misfortunes and responded, “I would always say, s*** happens. That’s racing, you know? It happened to me, it happened to many people in the past, unfortunately it’s happening to Charles.”

– George Russell is well aware of his good fortune and the challenge of his car, noting, “We were smashing the ground every single corner and every lap for 90 mins, it was pretty brutal – I’ll sleep well tonight! It’s what we’ve got to deal with it at the moment, there’s not much we can do in the short-term. There’s lots of intelligent people, hugely talented engineers in the sport so I’m sure we’ll find a solution. We didn’t get the podium on pure pace today but we did it because the team have worked very hard to deliver a reliable car, we did a good job to be ahead of the midfield and obviously we picked up on Ferrari’s misfortune.”

Perez scored an additional point for setting the fastest lap of the race. Latifi received a five-second time penalty for ignoring blue flags.