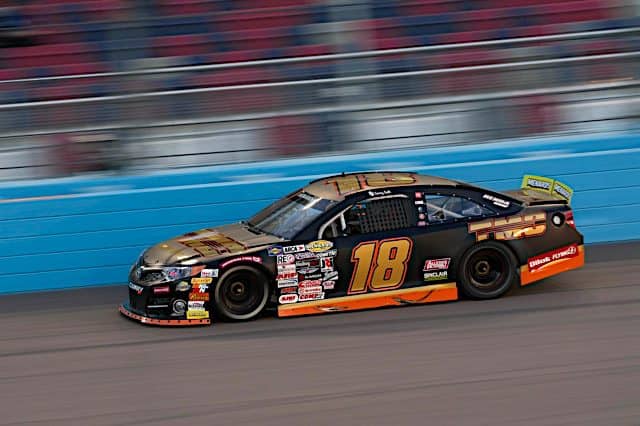 Smith showed exactly why he’s been an up-and-comer in that division at Iowa Speedway. He led laps on Saturday (June 11), contending for the win, and ultimately finished second to his Toyota comrade Brandon Jones in the Calypso Lemonade 150.

Smith posted the fastest lap during the lone practice session Saturday. However, his No. 18 Kyle Busch Motorsports Toyota had electrical issues during qualifying, and he wound up starting ninth. His team fixed the issues in time for the race, but Smith had to start the ARCA event at the tail end of the field.

It took Smith five laps to charge from there right into the top 10. By the first competition caution at lap 50, Smith led the race. Fifty laps later, Smith remained a solid third behind Jesse Love and Brandon Jones.

Once his Kyle Busch Motorsports crew pitted his No. 18, Smith was able to fight back to the lead and put himself in position to win the race.

With less than 20 to go, however, Jones powered past Smith en route to winning his second straight main ARCA event.

The battle for the lead >>>@BrandonJonesRac to P1 with fewer than 20 to go!@iowaspeedway | @MAVTV pic.twitter.com/Va8XfgWfMG

After the race, Smith pointedly stated the reason for his runner-up finish, 2.843 seconds behind Jones.

“Just got too free,” Smith said. “I was doing everything I could. Felt like it did everything right tonight. Had good restarts, had good short-run speed, worked the air as best I could. Just got beat. I don’t know what else we could’ve done. Needed a tighter car.”

Jones competes full-time in the NASCAR Xfinity Series and will soon be teammates with Smith in that division. Smith is scheduled to make his Xfinity debut this year with eight starts slated behind the wheel of a JGR Toyota.

Did running toe-to-toe with Jones for much of the race validate Smith’s opportunity? He doesn’t believe so.

“Not really,” he explained. “If I want to be the best, I have to beat guys like that, who are higher up in levels. Yet here we are.”

It was still a successful night for Smith, who built on his East series points lead as championship rival Taylor Gray finished with a DNF and an 18th-place result. As he now pilots the No. 18 Toyota full-time in the main ARCA series, it was an important first step for Smith as he seeks his first win in this division.

Smith’s performance Saturday night certainly signaled he’ll be a regular contender. As you might expect, though the 18-year-old is hungry for more.

“Obviously, our goal every week is to win everything we can,” he stated. “I didn’t plan to come here to run second, but we did, and we’ll move on to the next one.”

Next up for Smith and the main ARCA competitors is a trip to Berlin Raceway in Michigan. Smith was originally slated to compete in a super late model race at Berlin earlier this week, but a postponement due to inclement weather coupled with sponsorship obligations forced him to withdraw.

Smith has still competed at the 0.438-mile short track in a super late model before and is eager to compete there again next Saturday in ARCA.

“Looking forward to going to Berlin,” he explained. “It’s an awesome track. Super fun and we’ll go get them there.”