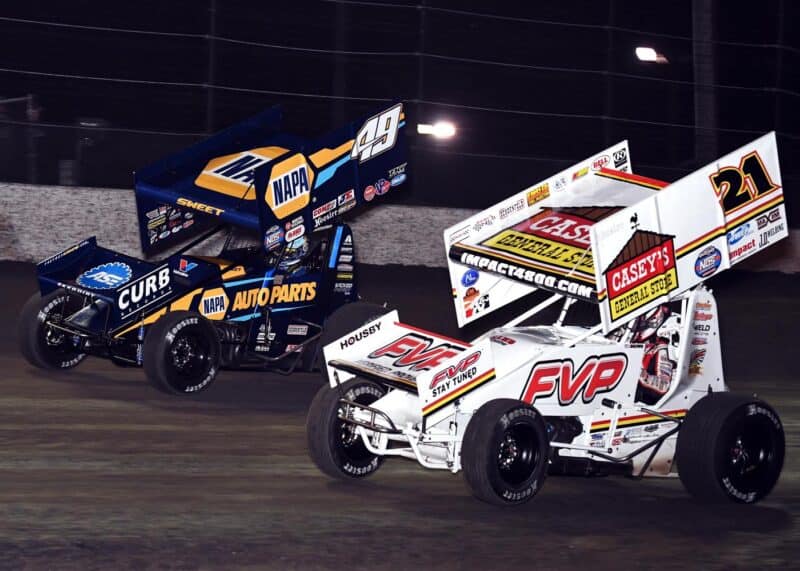 Knoxville Raceway saw the World of Outlaws regulars shut out in their first weekend at the capital of sprint car racing, continuing a display of regional strength in 2022 sprint car racing as well as the worst wreck dirt racing has seen in 2022.

He’s out of the car to a thunderous applause of the fans here at @knoxvilleraces after winning his 6th career @NosEnergyDrink Feature – it’s “Blackjack” @BrianBrown21! 🏁 pic.twitter.com/V4KctMGaYT

Brown is no stranger to success at Knoxville, having won more than 50 features at the track. However, the No. 21 car was lightning-fast across two days of WoO competition and the stout field that came with it, leaving Brown and new crew chef Danny Lasoski primed to contend for a Knoxville Nationals crown later this summer.

Saturday’s program at Knoxville was also headlined by a severe crash in the second heat race that was easily the worst dirt racing has seen in 2022, though fortunately all drivers involved were unharmed.

. @DIRTVision REPLAY: Eight of the twelve cars collide in a WILD start to Heat Race 2 at @knoxvilleraces! Thankfully all drivers involved are okay! #OutlawTough pic.twitter.com/baskk9tlb1

Sweet scored podium finishes during both nights of the Big Guns Bash and extended his series points lead over David Gravel. Gravel, Carson Macedo and Sheldon Haudenschild run second through fourth in the standings and are within eight points of each other. Brent Marks won Friday’s feature at Knoxville, leading all 25 laps.

Brian Brown finished first and third during the most competitive weekend Knoxville Raceway has seen yet in 2022, and on Saturday he proved absolutely untouchable once he got out in front of the field. Leading the track’s weekly points standings as he goes for his third track title in four years, Brown arguably could enter the Nationals as the favorite regardless of who shows up for the race.

DirtVision reported during Saturday’s broadcast that Brad Sweet is upset that this far into the 2022 season his No. 49 car has scored only one feature win. Despite that, Sweet leads the Outlaws in podium finishes and averaged a fourth-place finish on the weekend, leaving him in the driver’s seat as he seeks his fourth consecutive series title.

After Brown made the move for the lead, Sweet held off Spencer Bayston for his 10th podium of the season – most of any driver. pic.twitter.com/R1DxH2Ynuc

A quick shout-out goes to the hard chargers of the Knoxville weekend, Donny Schatz on Friday and Sheldon Haudenschild on Saturday. Considering there was a whopping one lead change across two features this weekend, picking up nine and 11 spots was an accomplishment.

Posse or not, the state of Pennsylvania had plenty to celebrate after the Knoxville weekend. Posse driver Brent Marks won Friday’s feature while national 410 sprint car wins leader Anthony Macri scored a top-10 finish Saturday, as the two went 4-4 in qualifying for feature spots. Keystone success wasn’t limited to the Posse though, as Outlaws regular Logan Schuchart finished second and sixth across the weekend’s features.

That luck wasn’t universal for Pennsylvanians though. Saturday night looked like Brock Zearfoss was primed for a rebound from a Friday showing that saw the Outlaw regular have to take a series provisional to start the feature, finishing second in the Dash and starting Saturday’s feature on the front row. Running third, Zearfoss cut down a tire on lap 10 and would never recover, finishing 15th.

Kerry Madsen had about as rough a weekend as a sprint car racer can endure at Knoxville. First, Madsen failed to advance out of Friday night’s non-qualifier feature, sticking him at the tail of the C-main without turning a lap in a heat race (more on that later).

Then Saturday, not only was Madsen smack in the middle of the heat race Big One that brought out an extended red flag, he also wrecked during Saturday’s feature as well.

Time to hang up the helmet bud. pic.twitter.com/Jrr4pFzdYs

Watching the Big One take out two-thirds of the field in Saturday’s second heat race, all I could think was that the NASCAR Truck Series had showed up to Knoxville a week early.

Once the dust from that melee settled and it was confirmed no drivers had been injured, my immediate thoughts then went to the fact that the heat race started 12 cars in the first place. I’m admittedly too new to dirt racing to have seen days of 20-car heats as James Essex was referring back to during the Eldora Million telecast earlier this week, but from where I’m sitting a 12-car heat race robs the evening of a building crescendo.

The idea is to keep building car count from the heats to the feature, which is what happened this weekend at Knoxville, but for my money starting the night with 12 cars on track leaves little room for the feature to grow. If I’m formatting a race, a heat would never start more than nine cars.

I’ve commented on this before, but it’s been a while, so I will reiterate that I can’t stand the World of Outlaws non-qualifier race format. Basically, if the car count’s really large, as it was at Knoxville this weekend, the cars at the back of the time charts after single-car qualifying have to run an immediate heat race, which determines whether they actually get to compete in the night’s heat races or get stuck at the tail end of a C-main.

This format is bothersome on numerous levels. For one, it puts even more weight than normal on single-car qualifying, which is of limited utility in dirt racing given how the track surface will change throughout the night. More importantly though, heat races are the first on-track action where the field is actually competing against itself. To thin the herd out even before the first side-by-side races take to the track takes a lot of suspense out of the evening’s preliminary action.

I hadn’t planned to feature the Brownell’s Big Guns Bash in Thinkin’ this weekend, but the Dream being postponed to September thanks to rain necessitated the move. A big tip of the cap to Knoxville Raceway for running as thorough and informative a website as they do. Having next-day race results and recaps posted for all to see is something every racetrack at every level in the country should look to as a best practice.

One of the downsides to watching dirt races from coast-to-coast is that inevitably a ton of the sponsors seen on the cars are so regional as to being inaccessible. It KILLS me that I can’t order up Casey’s pizza whenever I watch a race at Knoxville. Move that freaking general store east already!

Where it Rated (on a scale of one to six cans with one a stinker and a six-pack an instant classic): We’ll give the weekend three-and-a-half Budweisers served in the Dingus beer garden. Brian Brown’s win was a good story and an impressive overtake of Brad Sweet, but the racing wasn’t classic by any means and the carnage level was high.

Up Next: There’s no time to waste getting on with big money races, as the super late model ranks head to the inaugural Belleville High Banks Nationals for $20,000 and $40,000-to-win features Monday and Tuesday night. Coverage can be found on RaceXR.