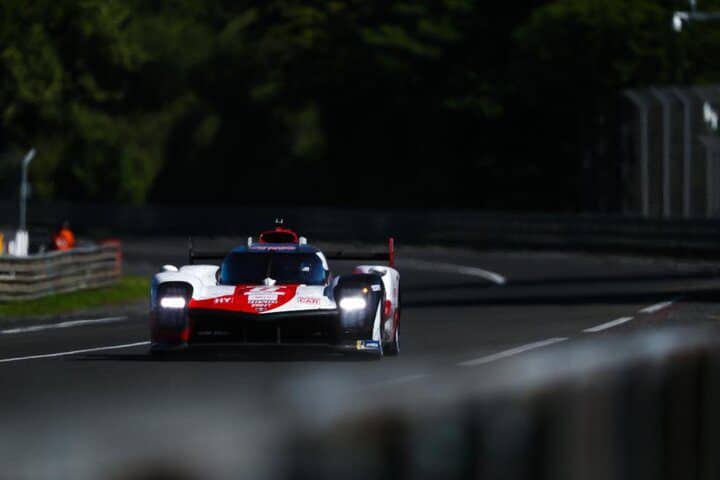 Toyota GAZOO Racing’s No. 8 Toyota GR010 Hybrid shared by Sebastien Buemi, Brendon Hartley and Ryo Hirakawa claimed the overall victory in the 24 Hours of Le Mans Sunday (June 12).  It is Toyota’s fifth consecutive victory at Le Mans.  For Buemi, it is his fourth overall win.  For Hartley, it is his third (two with Toyota and one with Porsche).  It is Hirakawa’s first Le Mans victory.

“This whole 24 hours, you try not to think about what might happen,” Hartley said after the race.  “Crossing the line, I was overcome with emotions.  I was crying.  [Winning is] an amazing feeling.  Big thanks to the entire team.  Especially Ryo [Hirakawa], who has been an incredible addition, and Seb [Buemi].”

The race was a back-and-forth affair between the two Toyotas.  Signatech Alpine and Scuderia Cameron Glickenhaus simply didn’t have the speed to keep up.  A stay in the garage at the end of the fourth hour ended any chance of a good finish for Signatech Alpine, which ended up ensconsed in the LMP2 battle for the remainder of the race.

The real turning point of the race occurred in the 16th hour.  Jose Maria Lopez was leading in the No. 7 Toyota when the car died suddenly.

Track stop for the #7 Toyota. She goes back to the pit to start again 👊

Lopez pulled through the Arnage corner and came to a stop on the right side of the road.  Here, Lopez performed a electronic reset in order to get the car started and drive back to the pits.  This was something quite similar to what ultimately put the No. 8 Toyota out at Spa last month.

Unlike Spa, it did not end the No. 7 team’s day.  It did require Lopez to get the car back to the pits for service.  However, the car was unsafe to be touched in the pits due to it dying again.  Lopez had to reset again, but not too quickly.  The situation took Lopez from the overall lead to a lap down to Hartley.

For the remainder of the race, Lopez, Kamui Kobayashi and Mike Conway did their best to make up the lost time.  But, in a race without complete neutralization (safety car periods), it’s hard to make up any significant amount of time with the other car running perfectly.  Lopez even set the fastest lap of the whole race at 146.721 mph in the final half hour.  But, it was not enough to prevent the No. 8 Toyota from winning.

The margin of victory was two minutes, 1.222 seconds over the No. 7 Toyota of Conway, Kobayashi and Lopez.  Scuderia Cameron Glickenhaus’ No. 709 for Ryan Briscoe, Franck Mailleux and Richard Westbrook was five laps down in third, followed by the No. 708 of Pipo Derani, Romain Dumas and Olivier Pla.

In LMP2, there were a number of teams that could have competed for the class victory.  Three of them were eliminated from contention in the first corner of the race.  There was a four-wide situation on the initial start of the race.  In the first corner, the LMP2 pole sitting No. 31 of Team WRT’s Rene Rast eased over into United Autosports’ William Owen, damaging the right front corner of the No. 22 and sending Owen spinning into the gravel.  Realteam by WRT’s Ferdinand Habsburg was also involved.  Further back, the Algarve Pro Racing No. 47 of Sophia Floersch was also hit, possibly by the No. 35 Ultimate entry.

Owen’s car ended up stuck in the gravel and required a tow out, bringing out the first slow zone of the race.  Owen’s No. 22 was already a lap down before the snatch vehicle moved into position.  Once Owen’s ORECA 07-Gibson was extricated from the gravel, he then had to drive eight miles and change to get back to the pits and change the nose.  By the time that happened, Owen was nearly two full laps down.  The No. 22 would eventually finish three laps down, 10th in class, having never made up any of the time.

Rast was judged to be responsible for the incident.  As a result, Rast was forced to serve a stop and 60-second hold in the pits.  That dropped Team WRT’s best car out of the hunt.  They would get back into the top 10 in class, but eventually retire in the 19th hour after Robin Frijns crashed the car exiting Indianapolis.  Habsburg also had to pit for repairs.  He would resume nearly a lap down to the pack and never contended.  They would eventually finish 17th in class, 21st overall.

In the mess on the first lap, Prema Orlen Team’s Robert Kubica was able to avoid the aforementioned shenanigans and put his No. 9 in the class lead.  He led until the first round of stops.  It was at this point that JOTA Sport’s No. 38 took over the lead.  With most teams running the same ORECA 07-Gibson package, it is rather difficult to completely dominate a race, but JOTA Sport’s Antonio Felix da Costa, Will Stevens and Roberto Gonzalez managed to do so.

The JOTA Sport team had da Costa and Stevens run long stints early on in the race in order to build out their advantage so that when Gonzalez (the team’s amateur driver) got in for his four hours of driving, he wouldn’t hurt them all that much.  With only one safety car period 19 hours into the race, the rest of the pack simply couldn’t close up much.  As a result, with no major issues, the JOTA squad cruised to victory in fifth overall.

Da Costa, Gonzalez and Stevens’ margin of victory was two minutes, 22.920 seconds over Prema’s Kubica, Lorenzo Colombo and Louis Deletraz.  The No. 28 JOTA entry of Jonathan Aberdein, Ed Jones and Oliver Rasmussen were a lap down in third.

TDS Racing x Vaillante’s fourth-place finish came after Philippe Cimadomo crashed the car on Thursday, which resulted in officials booting Cimadomo from the race due to them believing that Cimadomo was a safety risk to himself and others.  De Vries was hired to replace him and the team moved out of the Pro-Am category as a result.

In GTE-Pro, Corvette Racing dominated early on in an event in which all three manufacturers had a good chance to win.  The No. 63 Corvette led early in the race, but a mechanical issue in the sixth hour put the team in the garage and out of the hunt.  The issue would recur later in the race, putting them out in the 16th hour.

After a run off the track in the gravel trap, the #92, leading in the GTE Pro category, had to return to the pits because of a puncture 😰

With the front nose ripped off and splitter damaged, Christensen had to limp his Porsche 911 RSR-19 back to the pits.  The sheer amount of debris on the run to Indianapolis resulted in a slow zone for cleanup, which minimized the losses that Lopez had with his electrical issues.

For Christensen, he had to go to the garage for repairs once he dragged the Porsche back around.  The blowout took the No. 92 Porsche from the class lead to two laps down.

Following the tire failure, the No. 64 Corvette driven by Alexander Sims was looking good for the class victory.  Then, trouble struck on the Mulsanne Straight.  Sims was letting a couple of quicker LMP2 cars go past when AF Corse’s Francois Perrodo eased to the left and hit Sims.  The result was this crash into the barriers.

💔Heartbreak for the #64 Corvette

It was all getting abit tight down the Mulsanne – with the prototype pushing the LMGTE Pro leaders into the barriers.
Gut wrenching!

The crash put Sims out on the spot, ending Corvette Racing’s race right then and there.  The No. 83 team was given a stop and three-minute hold, while Perrodo was given two penalty points for the incident.  On the Motor Trend broadcast, it was noted that Perrodo was rather distraught over the crash.  He pitted at the end of that lap, exited the car and reportedly went to the Corvette Racing garage to apologize for the crash.

Sims’ crash gave the class lead to the Ferrari of AF Corse’s Alessandro Pier Guidi.  However, a costly second pit stop during the safety car period for Frijns’ crash gave the lead to Porsche GT Team’s No. 91 with Gianmaria Bruni at the wheel.  From there, Porsche never looked back as Bruni, Richard Lietz and Frederic Makowiecki never looked back en route to the class win.

Porsche GT Team No. 91’s margin of victory was 42.684 seconds over AF Corse’s Pier Guidi, James Calado and Daniel Serra.  The No. 52 AF Corse entry of Miguel Molina, Antonio Fuoco and Davide Rigon was a lap down in third.  Christensen, Kevin Estre and Laurens Vanthoor were two laps down in fourth, while Riley Motorsports’ Sam Bird, Felipe Fraga and Shane van Gisbergen were fifth.

GTE-Am was actually up in the air in the first couple of hours of the race.  AF Corse’s Vincent Abril started on pole in his Ferrari, but quickly lost his advantage to Dempsey-Proton Racing’s Harry Tincknell.  Similar Porsches of Team Project 1’s Matteo Cairoli and the Proton Competition-run Hardpoint’s Alessio Picariello were right up there as well.

However, much of the first half of the race was dominated by the WeatherTech Racing Porsche shared by Cooper MacNeil, Julien Andlauer and Thomas Merrill.  The Porsche ran error-free through the night.  Unfortunately, their advantage eroded in the dark.  TF Sport took the class lead during a round of stops at 4:30 a.m.  Aside from pit stops, this was an advantage they would not give as Ben Keating, Marco Sorensen and Henrique Chaves would hold on to take the win.  For Keating, this is his second GTE-Am class victory at Le Mans on the road.  Sadly, the 2019 win on the road didn’t work out well for him.

TF Sport’s margin of victory was 44.446 seconds over Andlauer, MacNeil and Merrill.  Northwest AMR’s Paul Dalla Lana, David Pittard and Nicki Thiim were a lap down in third.  GR Racing’s Ben Barker, Riccardo Pera and Michael Wainwright had the highest finishing Porsche in fourth, while Dempsey-Proton Racing’s No. 88 for Jan Heylen, Fred Poordad and Maxwell Root (all of whom have driven for Wright Motorsports in SRO America) finished fifth.

FIA World Endurance Championship teams will take a month off before returning to action at Monza in July.  That race weekend will see the debut of Peugeot’s new 9X8 Hypercar.