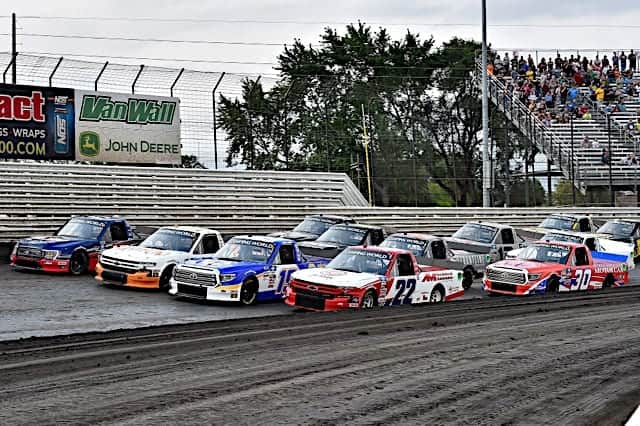 The NASCAR Camping World Truck Series visits Knoxville Raceway for its second dirt race of the 2022 season this weekend, June 18.

A total of 38 trucks are entered for 36 positions, meaning two will fail to qualify, barring any entry list changes.

Norm Benning returns for his second attempt of 2022 in his No. 6.

Thad Moffitt returns to the series in Young’s Motorsports’ No. 20, his first attempt with the team after previously driving the No. 43 for Reaume Brothers Racing and GMS Racing.

Brett Moffitt is entered at Knoxville for the second year in a row for AM Racing, this time in its No. 22.

Initially announced for On Point Motorsports’ No. 31, Joey Gase will instead drive the team’s flagship No. 30.

Brayton Laster will attempt his series debut in RBR’s No. 33, while Devon Rouse returns to the team for the first time in 2022 in its No. 43.

Niece Motorsports’ No. 41 is currently entered without a driver, though Tyler Carpenter is expected to pilot the truck in his series debut.

Bryson Mitchell will also attempt his series debut in G2G Racing’s No. 46. Brother Braden Mitchell is entered in the No. 53 for Sparks Motorsports, after last attempting a Truck race in 2018 at Eldora Speedway with RBR, failing to qualify.

After debuting with Kyle Busch Motorsports at the Bristol Motor Speedway dirt track, Buddy Kofoid again gets the nod in its No. 51.

Jessica Friesen returns to the series in Halmar Friesen Racing’s No. 62.

The Clean Harbors 150 kicks off at 9 p.m. ET on Saturday, June 18, with TV coverage on FOX Sports 1. The qualifying heats will commence before then at 7 p.m. ET.