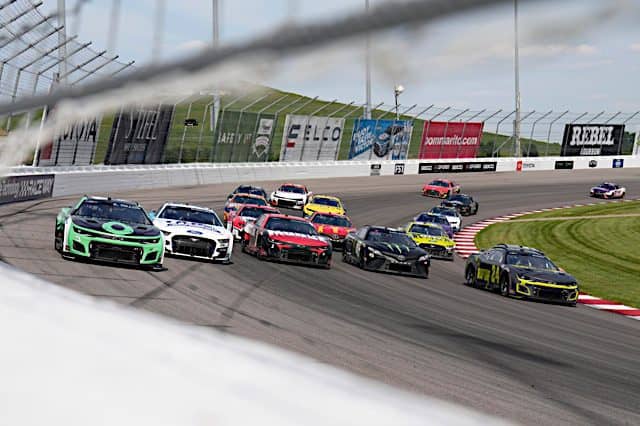 1. Is the playoff race headed toward chaos?

If you’re a fan of chaos, these next two months could be up your alley.

Just four spots remain in the NASCAR Cup Series Playoffs. Two drivers without a win yet, Ryan Blaney and Martin Truex, Jr. are very capable of winning races. So are Kevin Harvick and Austin Dillon.

Plus, consider the fact that we have three road-course races to go in the regular season at Indianapolis, Road America, and Watkins Glen. If what we saw Sunday means anything, two other drivers, Michael McDowell and Chris Buescher, being able to sneak in with wins is a possibility at those road courses, as well as Pocono, which drives much like a road course.

NASCAR could very well be in a situation where just winning a single race does not necessarily guarantee a playoff spot, and that could make the month of August more intense than perhaps ever before.

2. Should NASCAR begin the rest of the season out west?

NASCAR announced earlier this week that the Busch Clash would again return to the Los Angeles Coliseum next February. That return is well-earned, as this past year’s event by all accounts delivered on what the hopes of it were going in.

What should be weighed, however, is whether or not it’s the best thing for the bottom line of teams in racing’s top division.

Criss-crossing the country is not too heavy of a lift, comparatively speaking, for top teams like Hendrick Motorsports or Stewart-Hass Racing. But what about those such as Spire Motorsports or Rick Ware Racing?

The early west coast exposure is great for the sport. But NASCAR could build on that by filling a week after The Clash by staying out west. Why not race for a few more weeks out west and even run Sonoma early in the year on the back end of a Vegas-Phoenix-Auto Club Speedway swing?

Atlanta has benefitted with good weather thanks to being moved out of the second race of the season slot. But if you run Phoenix, Vegas or Auto Club, odds are very good that weather is a minor issue.

Now, would this put the Daytona 500 about five races into the season? Yes. But NASCAR has shown a desire to mix things up and tinker with the status quo to spice up interest.

If you do the same thing time and time again, a feeling of staleness could set in. Shaking up the early part of the schedule would be the polar opposite of that.

3. Was it the right call for Carson Hocevar to be in the truck?

Likely by design, few knew much about Carson Hocevar‘s status as last weekend at Sonoma Raceway approached. Days after a serious injury, there Hocevar was, winning the pole position before being subbed out during Saturday’s NASCAR Camping World Truck Series race in favor of Daniel Suarez.

Hocevar flew all the way across the country and ended up getting credited for points by way of Suarez’s sixth-place finish. As the season goes on, it remains to be seen if last weekend hampers Hocevar’s recovery from a scary wreck at Worldwide Technology Raceway.

If it does, it’ll beg the question of whether the safer play may have been to take the weekend off, apply for a playoff waiver, and set yourself up for a win or else scenario.

4. Should Bowman Gray and NASCAR be associated with one another?

If you surfed the interwebs Sunday morning, you probably picked up on Saturday night’s end-of-race festivities, for lack of a better phrase, at Bowman Gray Stadium.

Once again, the talk of why Bowman Gray went viral had nothing to do with a door-banging finish. Rather, what was essentially a wrestling match with someone being suplexed off the top of a parked car was viral on social media.

It’s not too different than the track where I got first exposed to racing: Thunderbowl Speedway, just outside of Valdosta, Ga. My most vivid memory, there, by the way, was the time that two drivers wrecked one another in a heat race, wrecked one another on the first turn of the feature and a fistfight between the two drivers broke out.

That’s right — the most vivid memory had more to do with something off-track than actual racing.

What happens at Bowman Gray obviously draws a lot of people — there’s a reason why it draws a gate of fans each Saturday night that other promoters would love to have numbers-wise.

Is it entertaining? Yes. But it also reinforces that what happens at Bowman Gray is more about what’s bound to happen not on the track, but in the infield.

If we were talking about cars trading paint all night for a close finish, it’d be one thing. Right now, the opposite is true, and NASCAR, even on the grassroots level, has to have a tough decision on how much it wants to be associated with Bowman Gray Stadium.

5. Has Chase Elliott lost his king of the road crown?

For a spell, Chase Elliott to road courses was the same as his dad was with Melling Racing in the 1980s at Michigan International Speedway. When the 9 unloaded, odds were good that they’d be the team to beat.

Elliott is still formidable on road courses; his racing back to a top 10 Sunday after a pit road issue reinforces that. But when NASCAR arrives at Road America in early July, it’ll mark a year since Elliott’s last road-course triumph.

Did the 9 team have an edge prior to last season? Obviously, with the current car, any perceived edge that anybody had got neutralized, and the challenge became to somehow recapture the lightning in a bottle that Elliott and Crew Chief Alan Gustafson appeared to have.

If we get through the summer without Elliott getting a win, it’ll be a sign that one casualty of the new car is Elliott’s road-course mastery.

One or two of us remember the History Channel series Madhouse about Bowman Grey. Try to find an copy of it now. NASCAR has been ashamed of that side of their history for a long time.
Big mistake.

Madhouse is available on Apple’s App Store and the TV Network or whatever its called. Has been for years.

That fight was in the chain race, not anything with the regulars. I go to BG multiple times a year and have for many years now and nothing happens there that doesn’t at any other short track I’ve attended in the last 35 years. Some of them are NASCAR sanctioned also. BG just gets more media attention because its the “Madhouse” and NASCAR’s oldest sanctioned track. Most of Frontstretch’s writers like to talk about BG like they actually go there occasionally. I have often wondered if any of them have even been there before.

Not an Apple guy, so that’s in in my world, would appreciate if you could get me the link to the other source.

Sorry if I wasn’t clear. You used to could purchase it through the App Store but now it’s on AppleTV for purchase. I just looked and it’s also on the Discovery+ streaming app. Pretty sure it originally aired on the history channel. They made a follow up about three or four years ago that only streamed I think on discovery plus. I’ve not looked to see if it’s on there.

The second series that was done in 2018 is available on the Discovery+ app. I just checked. Apple TV is the only place I know of now to see the originals unfortunately. Sorry I wasn’t clear with my original comment

At Pinecrest Speeday during a big money race Don Biederman, Jerry Makara and Bob Senneker (all legends) were nose to tail going into turn 3. Bob bumped Jerry who bumped Don who ended up in the wall. Don was furious and thought Jerry had deliberately hit him and went after him while he was still in his car. Don couldn’t get at him through the window nt so he climbed up the trunk and tried to get in through the back window. Jerry took off and was driving around the track with Don standing out the back window.
That was a Saturday night. On Wednesday I went to a race at Capital City Speedway nrar Ottawa (Capital of Canada) and Jerry’s car had outlines of foot prints on his trunk.

Remember Makara coming to Louisville and Salem when I was around 12 years old. White Camaro with the Thrush bird.