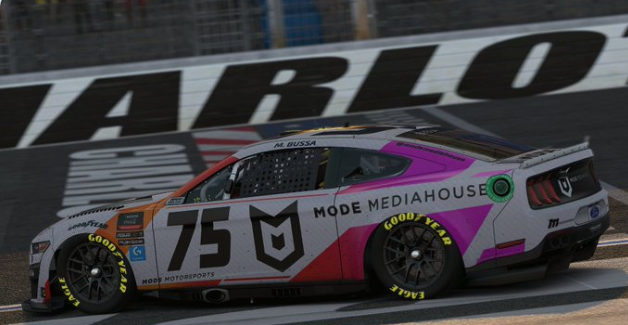 With nine races down and nine races to go, the eNASCAR Coca-Cola iRacing Series is currently in the middle of a three-week break before the final five races of the regular season. Now is as good a time as any to check in on the series, see what trends are developing and preview the rest of the regular season races leading up to the playoffs.

One similarity between the current Coca-Cola iRacing Series season and the ongoing NASCAR Cup Series season is that anyone can win on any given week. Through the first nine races, there are already seven different winners:

The seven different winners represent seven different organizations: Clint Bowyer Racing (Olatunbosun), JR Motorsports (Conti), Stewart-Haas eSports (Wilson), William Byron eSports (Ottinger), Wood Brothers Racing (Lowe), Mode Motorsports (Bussa) and Charlotte Phoenix (Bowlin).  The 2022 race winners also possess a wide range of experience in eNASCAR’s top level, with past champions like Conti and Ottinger, as well as young guns such as Bussa and Olatunbosun, who have only a season or two under their belts. Will the parity continue, or will select drivers begin to stand out from the pack?

Toyota Teams Are Tumbling Down the Standings

Like their Cup Series counterparts, the top drivers of eNASCAR have had to adjust to the Next Gen car and the differences in handling and aerodynamics that come with it. Some drivers and teams have adjusted well to the new car while others have struggled.

The Toyota teams are in the latter of those two groups. Until Bowlin took the checkered flag in the most recent race at Gateway, Toyota drivers were winless on the season. A peek at the current driver standings shows that Bowlin is the only Toyota driver in the top 10 at sixth place. To find the second-highest Toyota driver in the standings, one has to go all the way down to Bobby Zalenski in 16th.

Of all the Toyota teams, 23XI Racing embodies the manufacturer’s 2022 struggles the most. Keegan Leahy and Mitchell deJong were first and third in the 2021 championship standings, respectively. However, halfway through 2022, deJong sits at 17th with the standings, with Leahy right behind him in 18th. The two find themselves not only in danger of missing the playoffs but are also dangerously close to the top 20 cutoff for a guaranteed spot in the Coca-Cola iRacing Series in 2023.

This begs the question: is there something to the Toyota teams’ struggles in the first half of the season, or is it just a coincidence?

Previewing The Rest of the Regular Season

Five races remain before the Coca-Cola iRacing Series playoff field is set. Here is a race-by-race breakdown of those five races:

With five regular season races remaining and only three playoff spots available to non-winners, will “win and you’re in” turn into “win and you might not be in”? Which drivers will establish themselves as championship contenders? Who will make the top 20 and guarantee their spot in the series in 2023? We will get the answer to these questions and more as the second half of the season unfolds in the coming weeks.

The eNASCAR Coca-Cola iRacing Series returns next Tuesday, June 21, with a race at Nashville Superspeedway. The race will start at 9 p.m. ET, and it will be broadcast live on eNASCAR.com/live, YouTube.com/iRacing and Twitch.tv/iRacing.

Does anyone really care?