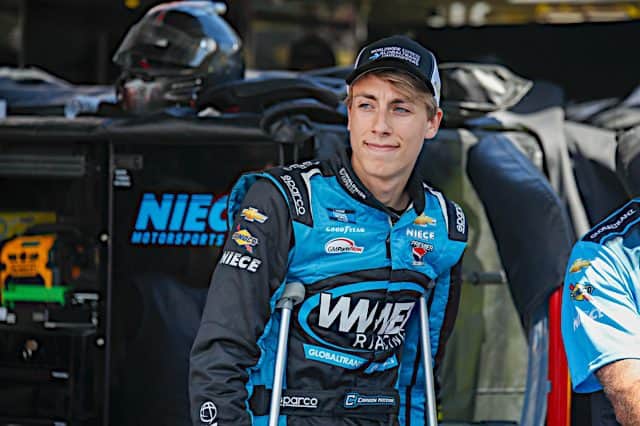 If there’s one thing racecar drivers don’t ever want to do, it’s to get out of their racecar before the checkered flag.

It’s rare that it happens, but sometimes something comes up during a race when the driver isn’t able to continue. Illness, or the effect of an injury can take its toll quickly — the cockpit of a NASCAR Cup Series car hovers around 120 degrees during a race and can be much hotter during a day race in the summer months.

NASCAR has a rule in place to protect drivers: the driver who starts the race in a car is the driver credited for the car’s finish. When every point earned during the season matters, those points are crucial, and make a driver simply parking for the day an almost unthinkable option.

And that’s a problem.

But there have been questions raised lately about the continued necessity of such a rule. In the days of playoff waivers, it’s easier for a driver to simply miss a race. NASCAR has granted waivers without exception for injury or illness since the rule has been on the books.

It did raise a few eyebrows in Sonoma when Cup regular (and now Cup playoff driver) Daniel Suarez subbed for an injured Carson Hocevar during the Camping World Truck Series race at Sonoma Raceway.

Hocevar injured his right ankle in the previous race at World Wide Technology Raceway, had surgery, and was cleared to start at Sonoma, but his team knew going in that he likely wouldn’t be able to run the full distance. Suarez, who won the Cup race at Sonoma the next day, took over the wheel and drove the No. 42 truck to a sixth-place finish.

Under the rule, Hocevar is the only driver listed in the final rundown. That would be true even if Suarez had won the race. And yes, that has happened.

The driver in question was Aric Almirola. Almirola was running a part-time Xfinity Series schedule for Joe Gibbs Racing in 2007, whose Cup drivers, Denny Hamlin and Tony Stewart, also ran a partial Xfinity schedule. Hamlin was scheduled to race the No. 20 Rockwell Automation car in a race at the Milwaukee Mile, running double duty with a Cup race in Sonoma. Hamlin would fly to Milwaukee immediately after his Cup obligations for the nighttime Xfinity race. Almirola had been on hand to practice and qualify for Hamlin, putting the car on the pole.

But as race time drew closer, it was clear that Hamlin wasn’t going to make it in time to take the green flag. Almirola started the race (and, in doing so, kept the team from having to start at the back for a driver change).

A look at the official race results shows that Almirola led 109 of 250 laps, a convincing performance. He’s credited with leading the final 13 laps of the event and beating Scott Wimmer to the line by half a second for the victory.

Carl Edwards actually led the most laps that day, but the No. 20 looked like a winner all weekend, and Almirola certainly made it look that way early in the race.

But Almirola wasn’t in the car when the race ended. Hamlin arrived, and the sponsors made it clear that they had paid to see Hamlin race the car. And so the swap was made at the earliest caution after Hamlin’s arrival.

Almirola and his fans were understandably upset with the decision to remove the driver, who was proving more than capable of running, and winning, the race on his own. But business was business, and the sponsor saw Hamlin take the checkers — something he’ll never get the credit for.

There were no playoffs in the Xfinity Series at the time, and Almirola wasn’t running the full schedule, so there were no title implications. That made it seem even shadier to some. JGR and Hamlin did nothing outside the rules, not even in a grey area, but the move won them no friends.

Some questioned the rule then, and it’s being questioned now in the wake of Hocevar’s injury. He had every reason to get out of the truck, and staying in could have been a danger.

The questions surround the choice of relief driver and Hocevar’s playoff status. Only 10 drivers make the cut in the Truck Series, and Hocevar is currently eighth in points without a win that would lock him in. Missing a race outright, waiver or no, could have knocked him out of contention, or at least reduced his cushion significantly. Niece Motorsports couldn’t take the chance of missing the playoffs (and the added airtime and point fund money that come with a spot) due to Hocevar’s injury.

Enter Suarez, a Cup driver who won a Cup race the next day.

Perhaps it’s Suarez’ status as a Cup driver that raised the questions, and they’re good questions.

Should NASCAR make changes to the long-standing rule in the playoff era? Sure.

But should the rule go away? Absolutely not.

The rule, while it does protect the driver who needs relief, is, simply put, a safety rule. It protects the points of the original driver, but it protects the safety to the rest of the field.

A driver who’s not physically and mentally at his sharpest is a danger to others.

Drivers are a tough breed — they’ll stay in the car when they’re throwing up in their helmets or had to be helped into the seat, but there’s a breaking point. And it’s at that point where the risk of a crash rises.

Even if another driver isn’t collected in a crash, if the injured driver is injured further or the ill one faces medical danger, that’s not good for them, their teams or NASCAR. That driver might then be forced to miss additional races. That’s also hard on fans who bought tickets to see that driver.

So, yes, the relief driver rule is necessary and always will be, because drivers need to know they have an option. Otherwise, they’ll run past that danger point, to nobody’s benefit.

Could the rule be changed? Sure, there’s room for that as the sport has changed.

Certainly, Cup drivers could be barred from subbing in the Xfinity and Truck series. If the worry is that a Cup driver could inflate the team’s results under the guise of the regular driver not feeling well (that’s absolutely not what happened at Sonoma), then that could easily be addressed.

The other issue raised specifically by Hocevar’s injury is whether a driver who’s already injured and knows ahead of time that he can’t rub the distance is the same as a driver who becomes ill during a race or is nursing an injury but starts the race intending to finish.

Hocevar could have applied for the waiver (and there is no reason he would not have received one) and sat the race out entirely. But the playoff system, while improved in that waivers can happen, doesn’t really have a provision for a driver who’s eligible for a waiver but not locked in.

It’s really hard to argue that a driver can’t start a race as long as he’s medically cleared to do so. That includes if he’s not cleared to finish.

The playoff system certainly does grant some drivers more options than in the past when they’re dealing with injury, illness, or personal emergency. Most winning drivers can miss a race and not fall below the point threshold for the playoffs. Drivers near the cutline without a win still need a rule to fall back on, and allowing them a relief driver is the obvious answer.

Changing drivers during a race is hard — teams try to wait for a caution because it takes time to get one driver out and another in. Lost track position is a given with no guarantee that the relief driver can make it up. That alone is enough to make changes happen only when necessary.

And finding a driver in the moment can be a challenge. In a day where drivers who fall out of a race tend to leave as soon as they can, having someone available poses a frantic search. Having a driver from another series on standby makes sense, but that can be accomplished without putting a Cup driver in a Truck or NXS seat.

Relief drivers are a necessary thing in racing, for the safety of everyone on the track. The playoff era doesn’t change that, and a few small tweaks could make the rule work as NASCAR evolves.

Perhaps there should be some sort of rule where you can miss 1 or 2 races, and still be playoff eligible? Its baffling that Grant Enfinger was “ineligible” for the playoffs last year when he missed 1 race, yet they were ok with Tyler Ankrum getting in 2019 Truck Series playoffs after missing the first 3 races, and Kyle Busch when he missed the first 11 races of the 2015 Cup Season. On another note, perhaps he had a relief driver, as the possibility of him getting a win in underfunded equipment (Not sure the quality of Niece Motorsports equipment?) is somewhat low, and missing a race would put him near the cut line, a la Jimmie Johnson missing 2020 Playoffs after sitting out Indianapolis.

There are waivers in place for injured or ill drivers–both Ankrum and Busch missed races due to injuries. As far as I know, Enfinger wasn’t scheduled for the race he missed (he ran part-time for two different teams), and that means he was ineligible for a waiver as playoff drivers must attempt every race unless there is an exception for medical reasons.

Tyler Ankrum did not turn 18 until the 4th race of the season. He won a race and was in the top 20 in points, which made him playoff eligible.

He also Start & Parked a couple of races for Nemco as well that year. I think he was 17th or 18th in points by Playoff time.

Enfinger would have been better than half the playoff field that made it last year. The medical waiver should have a cutoff at 4, or maybe even 5, races. Missing 11 races was just asinine. Otherwise, let them miss a race or 2 without penalty.

I remember Earnhardt Sr. blacking out at the beginning of a Darlington race once in the 90’s. Someone replaced him but I don’t remember who. Sometimes, as you pointed out, it’s safety issue for all involved.

Rumor is he may have had a little much the night before, lol?