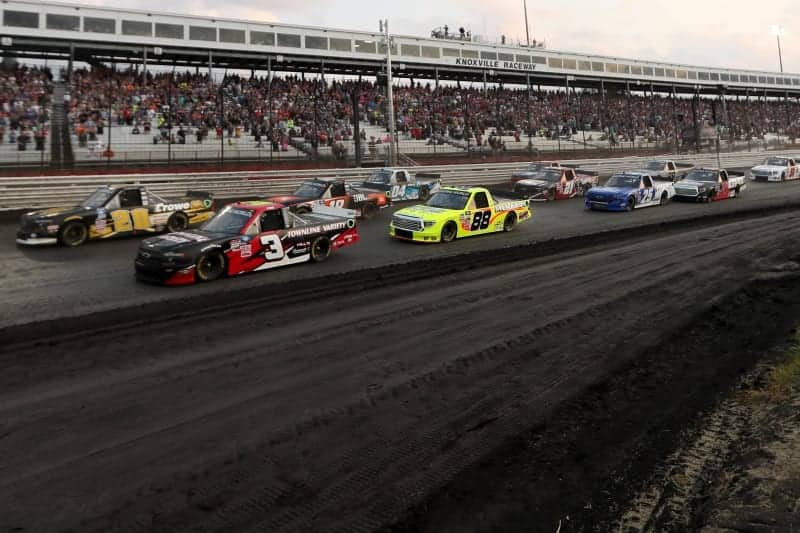 This weekend, the Camping World Truck Series stands as the lone NASCAR race to watch with the NASCAR Cup and Xfinity series taking a rare combined weekend off.

Of course, that means all eyes will be on the series’ second visit to Knoxville Raceway, the second dirt race on the schedule after the earlier trip to run on Bristol Motor Speedway dirt.

Depending on who you ask, there are mixed feelings on whether the Truck Series should even be racing at the half-mile dirt oval. In fact, words like chaos, fun, melee and expensive, among others, were used to describe last year’s inaugural race at the track.

It was a race slowed by 14 cautions for 80 laps, a whopping 45% of the race, and that doesn’t include the nearly 15-minute red flag to clean up the Big One that officially involved 17 trucks on the first of four overtime attempts.

“Knoxville fans are awesome …” Sheldon Creed, who was knocked out of the race on that first overtime attempt, said. “But we don’t belong here.”

Creed was probably at least partially right, especially when it came to the final stage. To call it a demolition derby would be putting it lightly. But based on the heat races and the first two stages in last year’s event, there was definitely some promise in bringing the series to the track. NASCAR just needed to take some time to prep the surface and keep it raceable for the final stage.

That’s not to say it was all bad, though. If you recall, last season when the Truck Series hit Bristol dirt, the race (what little ran on the scheduled day) was plagued by mud that clogged radiators and covered windshields before NASCAR ultimately threw in the towel and postponed it. Even though there were rains at Knoxville overnight Thursday into Friday for the 2021 running, the track prep team was well-equipped to handle the change in the surface and ensured mud wasn’t an issue.

Regardless of which side of the argument you stand, the fact remains that the series is headed back to Knoxville this weekend.

FRIDAY NIGHT the @NASCAR_Trucks tear up the track with two practice sessions scheduled for 6:05pm and 8:02pm!

General Admission Tickets are $10 with ages 12 and Under Free!

Along with the half-mile dirt track come some unique rules the series doesn’t typically face throughout the season.

Instead of traditional one-lap qualifying to set the field, four 15-lap races will determine the starting lineup. The fields for those races will be set using a random draw, and only green flag laps will count.

But it isn’t as simple as the finishing order determining the starting lineup for the main event. Points will be awarded to drivers based on their finishing position and passing points. The winner of each heat will earn 10 points, second will earn nine and so on down to one point for the 10th-place finisher. Additionally, any positive position change will add passing points to the finishing total, but drivers will not lose points for finishing worse than where they started. Any ties will be broken using owner points.

The feature race itself will still have three stages (40/50/60) for a total of 150 laps, but instead of pit stops, the field will be frozen at the end of each stage. Should a driver choose to stay out, they will restart ahead of those that pitted. Teams will be given time to make any adjustments, change tires and add fuel, but this is the only time teams will be allowed to fuel the trucks or change tires, pending any approval by NASCAR for flat or damaged tires.

See also
Eyes on Xfinity: What if Anthony Alfredo Won at Auto Club?

While the series will still use its overtime, free pass and wave around rules, there will not be a choose rule in place for Knoxville.