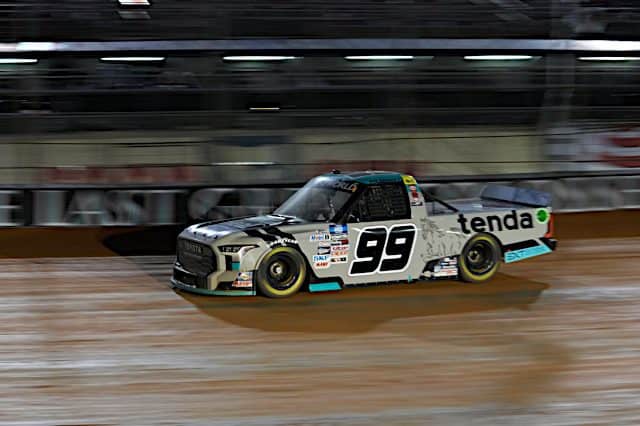 Ben Rhodes scored his first win on dirt at Bristol Motor Speedway in dominating fashion earlier this year, and he has picked up right where he left off with his dirt dominance in Friday’s (June 17) practice sessions at Knoxville Raceway.

Rhodes was the fastest in the first practice session with a speed of 78.149 mph; no one else was faster than 76.9. In addition to the faster overall time, Rhodes also led all drivers with the fastest 10-lap average.

2019 Eldora Speedway winner Stewart Friesen was second-fastest in the first session, with Carson Hocevar coming in third after a runner-up finish behind Rhodes earlier this year at Bristol. Ty Majeski and Matt Crafton — the 2017 winner at Eldora — rounded out the top five.

Brett Moffitt clocked in sixth for a special one-off race in his home state of Iowa. After becoming a first-time father, Austin Wayne Self decided to take time off from driving duties for his No. 22 AM Racing team; Moffitt will be taking his place for Saturday’s (June 18) race.

For the second, 25-minute practice session, it was Hocevar who recorded the fastest lap with a speed of 76.570 mph. Hocevar has continued to show speed since his frightening last-lap crash at World Wide Technology Raceway, as he recorded his first career pole last weekend at Sonoma Raceway and once again has a fast truck for tomorrow.

See also
Truckin' Thursdays: Trucks Having Something to Prove at Knoxville

The second session saw a couple of different names up front, as Chandler Smith came in second. Crafton was third, and Kraus’ Bill McAnally Racing teammate Colby Howard was fourth quickest. Rhodes was fifth fastest, making him and Hocevar the only two drivers to be top five in both sessions.

Majeski clocked in sixth while Hailie Deegan was the highest Ford for the second session in seventh; Gilliland, Moffitt and Tyler Ankrum completed the top 10.

The qualifying heat races for the Clean Harbors 150 will take place on Saturday, June 18 at 7 p.m. ET, with TV coverage provided by FOX Sports 1; the main event will begin two hours later at 9 p.m. ET.