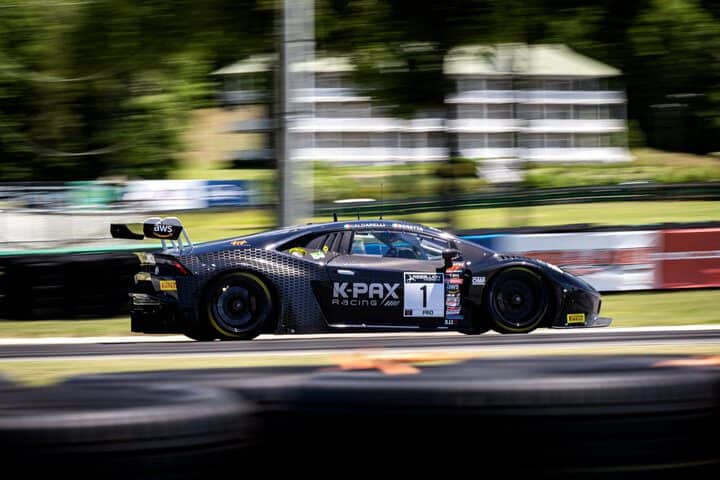 K-PAX Racing’s Andrea Caldarelli and Michele Beretta dominated the proceedings Saturday to claim victory in Race No. 1 for Fanatec GT World Challenge America Powered by AWS at VIRginia International Raceway.  For Caldarelli, it is his fifth straight victory to start the year, while it is Beretta’s third straight.  Despite the success, this was not a perfect day.

“[Winning] is not easy,” Caldarelli told SRO America’s Amanda Busick after the race.  “The car was pretty good, to be honest, but we are struggling with speed from Wednesday.”

Beretta won the pole for Race No. 1 and was easily able to outdistance US RaceTronics’ Steven Aghakhani was on the run to turn 1.  Teammate Misha Goikhberg was able to slip past into second overall while maintaining the Pro-Am lead.  Aghakhani ended up back in fourth as Turner Motorsport’s Michael Dinan was able to get past as well

This race ultimately had a lot of trouble truly getting underway.  Zelus Motorsport’s Jeff Burton ended up stopping on-course seven minutes into the race with an electrical issue.  He was able to continue, but lost a bunch of time.  A lap later, TR3 Racing’s Ziad Ghandour spun and hit the tires in the Oak Tree Turn to bring out the race’s first full course caution.

In Pro-Am, BimmerWorld Racing’s Chandler Hull led from the pole over Racers Edge Motorsports’ Ashton Harrison.  Harrison appeared to have the faster of the two cars, but didn’t really get a chance to do anything about it prior to the first caution.  On the restart, Hull lost control under braking for turn 3 on his own and spun.  Harrison was forced wide to avoid, but Hull ended up backing across the track and hitting Harrison in the driver’s door.  This gave the class lead to Triarsi Competizione’s Justin Wetherill.

Roughly 30 seconds after the Hull-Harrison incident, there was more significant trouble in the Climbing Esses.  ST Racing’s Samantha Tan slowed due to a chain reaction stack up and got hit hard from behind by Harrison, as seen here from this in-car camera in Tan’s car.

(1/2) Not quiiiite how we wanted Race 1 to go… 😬 first and foremost, @samanthaatan and everyone else involved are all perfectly fine and on the bright side, our car is repairable! We'll let the videos speak for themselves, but that's racing and these things happen. pic.twitter.com/rADWDeH8DN

This contact spun Tan’s BMW out in front of a good chunk of the field.  Everyone scattered and AF Corse’s Jean-Claude Saada ran in the back of Tan.

Naturally, this crash brought out another full course caution.  Harrison, Saada and Tan were all out on the spot.  Tan has indicated that the No. 38 BMW will not race on Sunday.  While the car is repairable ahead of next month’s weekend at Watkins Glen, it is not repairable at the track.  Racers Edge Motorsports has thrashed, but they will run Sunday.

The restart saw some fierce action as Aghakhani made a big move to get himself back up to second.  However, Aghakhani went a little wide.  That allowed Dinan to go past.  Aghakhani then slipped back to fourth as Goikhberg (who restarted second) was able to get to the inside at turn 4.  Contact was made, resulting in Aghakhani going off into the grass.  Meanwhile, Beretta slowly but surely pulled away from the rest of the pack.

Aghakhani and Goikhberg went back and forth multiple times over the next few laps.  Just before the pit window opened, the two had contact on the backstretch, a scary proposition at 165 mph.  A couple of turns later, Goikhberg’s right rear tire went down as a result of the contact.  The sudden slowing from Goikhberg resulted in Aghakhani getting in the back of the Lamborghini and spinning Goikhberg out.  Luckily for Goikhberg, his losses were limited in that the pit window opened up just as he spun, allowing him to immediately duck in for fresh tires, a change to Jordan Pepper, and some repairs.

Once the stops were complete, Caldarelli ended up with a six-second lead over Loris Spinelli.  Spinelli had a lot of speed and was seemingly running down the leader.

The advantage was down to three seconds with a half hour to go when Spinelli went too fast into the Oak Tree Turn and slid into the tire barrier.  Spinelli was able to extricate himself from the barrier and continue, but he dropped to fourth overall.  Spinelli later made an unscheduled stop for a fresh right rear tire that dropped them way down the order.

Spinelli’s crash gave Caldarelli a lead of over 10 seconds over Turner Motorsport’s Robby Foley.  From this point on, Caldarelli continued to pull away en route to victory.

Beretta and Caldarelli’s margin of victory was 17.570 seconds over Foley and Dinan.  Goikhberg and Pepper ended up third, while Aghakhani and Spinelli were fourth.

In Pro-Am, Wetherill continued to lead after the crash.  His main competition was Crowdstrike Racing’s George Kurtz, but Kurtz ended up cutting a tire and having to pit 34 minutes into the race.  Since this was outside of the pit window, it counts as an extra stop and cost the them 40 seconds or more.

Kurtz’s stop put Wright Motorsports’ Charlie Luck second in Pro-Am.  The positions held through the pit sequence with Ryan Dalziel emerging with a five-second lead over Jan Heylen.  In the second half of the race, Dalziel was able to maintain his advantage and give Triarsi Competizione their first Pro-Am victory.

Dalziel and Wetherill were able to get all the way up to third overall by the finish.  Their margin of victory was 6.074 seconds over Heylen and Luck.  DXDT Racing’s David Askew and Dirk Mueller were third in their Mercedes, followed by Ghandour and Giacomo Altoe.   RealTime Racing’s Michael Cooper and Erin Vogel recovered from an early spin to finish fifth.

In Am, Triarsi Competizione’s Charlie Scardina qualified a strong fourth overall.  He dropped back on the start of the race behind Hull and Harrison, but they had their collision in turn 3, Scardina moved back up to fifth.  The big crash shortly afterwards eliminated their only competition.

Scardina held onto fifth until he made his pit stop to put Onofrio Triarsi in the car.  Triarsi ultimately dropped to 11th overall, but still took the class win.

Fanatec GT World Challenge America Powered by AWS Race No. 2 at VIR is scheduled for 1:15 p.m. ET Sunday afternoon.  The race will be streamed live starting at 1 p.m. on the GT World YouTube channel.  Tape-delayed coverage will air at 8 p.m. ET on CBS Sports Network.