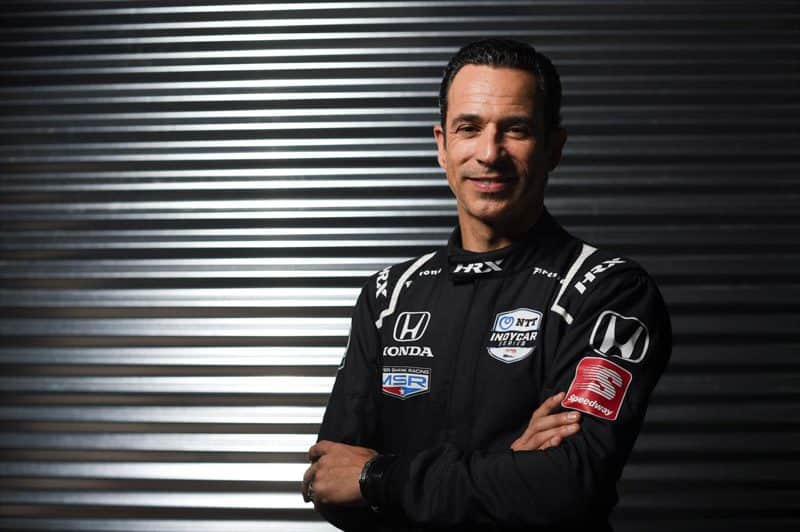 He kicked off 2022 with his first victory in the star-studded league, with the win coming at Five Flags Speedway in Pensacola, Fla.

Castroneves, scheduled to run part time in SRX this year, won the second heat of the night, and his No. 06 came to life late in the feature, helping him power through the field. He held off fellow NTT IndyCar Series veteran Tony Kanaan before pulling away to win and perform his signature fence climb afterward.

“This is fantastic,” Castroneves said after ascending the catch fence and pouring a drink over pit reporter Matt Yocum’s head. “What a great — thank you, SRX, everyone here. Just absolutely amazing, Tony [Stewart], thank you so much.

“Hawk!” he added, pointing to SRX CEO Donald Hawk. “Hawk and I had a bet — winning the race, he would find me one race in NASCAR, right? ”

In victory lane, @h3lio says he and @HawkSMI had a bet that if he won then Hawk would find him one race in #NASCAR.

Though he couldn’t seem to find Hawk in the crowd, Castroneves thanked a host of others.

[…] So, let me focus here. I want to thank so many people. Thank you, SRX, for giving me this opportunity, my buddy Tony — I don’t know what happened, we were right there together, but what a tough crowd. These guys here are so competitive, so that was super cool, man. Running side-by-side with my team — my brother, actually — Tony. I don’t know what happened to him, but at the end of the day, I work really hard to get into P1. So, we got it, man!”

With a laugh, Castroneves bounded towards the stands with arms raised, where he sprayed fans with water and acknowledged the crowd.

Guest racer Bubba Pollard secured a spot in the feature by virtue of the best average finish in the Deep South Crane Blizzard Series’ PepperJack Kennels Twins event. Pollard jumped out to an early lead with Ryan Newman in tow, and the two traded the lead while Kanaan, Tony Stewart and Castroneves battled in the top five behind them.

As Newman faded, Kanaan got by both him and Pollard for the lead as Castroneves also charged to the front. Further back, Tracy moved Stewart up the racing surface and was paid back in quick succession with a fender from the No. 14.

The Tony Stewart mid-race interview is back

"He tried to scare the crap out of me," he says on Paul Tracy battle. "We're trying to take care of these thing [tires] a bit"#SRX #SRXRacing

The first “fun flag” caution flew on lap 21 of the 75-lap race, during which Pollard suffered a flat right-rear tire, which appeared to be a result of contact with Newman, and made a pit stop.

The subsequent restart gave way to a past-Indy 500 champion battle for the lead between Kanaan and Castroneves, while Pollard began to work his way through the field.

That IndyCar duo dominated the latter stages of the race, another late caution setting up a restart with less than 20 laps remaining. Castroneves and Kanaan again battled for laps on end before the four-time 500 winner cleared the one-time 500 winner, setting sail and stretching his lead to over half a second with 10 laps remaining.

Newman poked his nose between the two and battled with Kanaan as Pollard looked for an opening. He found one, clearing Kanaan, but his battle with Newman raged until the checkered as Castroneves claimed the victory. Pollard, Newman, Kanaan and Bobby Labonte rounded out the top five, while Biffle spent a chunk of the night in the back of the field before climbing to sixth.

Stewart, meanwhile, started the night in or near the top five before fading late.

Guest driver Pollard led from the pole, though Paul Tracy scooted by to lead the opening lap. Pollard then hunted him back down to pass him for the top spot and pulled away on a late restart, Kanaan in tow. Castroneves bumped and spun Ernie Francis Jr. late, but the yellow was held and Pollard secured the heat victory.

The inverted field was led to green by Castroneves, and Michael Waltrip eventually followed the four-time Indy 500 champion into second. Francis was the only driver failing to finish, while Castroneves won the heat.

The series heads to South Boston Speedway next Saturday, June 25, and will air at 8 p.m. ET on CBS.

Words cannot describe how HOT it was in the stands during the race and especially during the Outlaws race before that. It was 101° with a heat index of at least 110. Still the stands were pretty full. Gotta love the 5 Flags crowd who were rewarded with a great race and a fence climb by Hello!