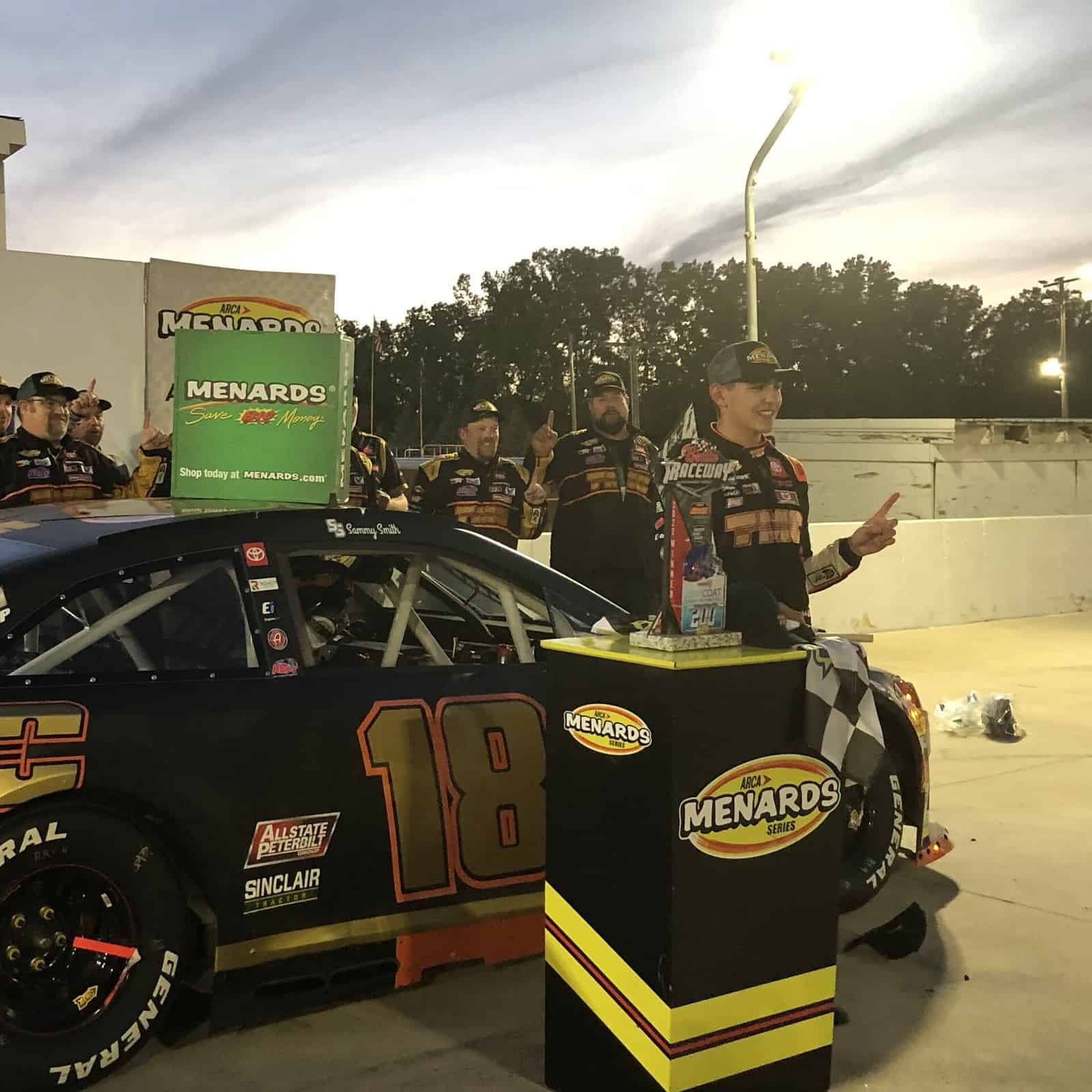 The ARCA Menards Series took to Berlin Raceway for the Zinsser SmartCoat 200 on Saturday (June 18) night. It looked to be Daniel Dye‘s night in his GMS Racing No. 43 as he dominated the entire race leading 192 of the 200 laps. Unfortunately, with less than 10 laps remaining something broke under the hood, giving the lead and win to Sammy Smith.

“It sucks for them [Dye and team] they deserved to win tonight, we got lucky,” Smith told MAVTV Motorsports Network post-race. “It’s really cool [to get the first win] we weren’t the best car today and I feel like I need to get better. We’ll continue to work hard and move on to Elko [Speedway].”

This was the first win in the main ARCA series for both Smith and Kyle Busch Motorsports.

Dye said post-race: “I know we had a great race car, GMS just did really good at bringing me a great car and led every lap until we didn’t. Once again it’s something, just have to keep our heads up there’s nothing we can do about it, it’s just part of it.”

Never, ever give up!@sammysmithSS gets his first ARCA Menards Series victory in dramatic fashion at @BerlinRaceway!@MAVTV | @FloRacing pic.twitter.com/avXtzk5cZx

Tom Hessert was battling Smith for second place for what seemed to be most of the night and ended up finishing in second behind Smith.

“A good outcome for us,” Hessert III told Fronstretch after his first start since the penultimate race of the 2018 ARCA season. “Second place is a nice night. It’s been a while. Second place is a great result after being out for so long. They [Dye and Smith] were definitely the superior cars tonight. We were just a little too snug in the center, a little too free off, and they were good so credit to them. We’ll be there [to contend at Elko] next week.”

“We were ok,” Gray said. “We struggled; we’ve really struggled both years we’ve been here. We can’t seem to figure out what Chad Bryant [Dye’s crew chief] and everybody at GMS [Racing] have got figured out for this place. I would’ve liked to been able to pass the No. 20 [Love] there at the end but I lost my balance here at the end. We got really tight with no rear grip and then got lucky there at the end with the No. 43 [Dye]. Pretty heartbreaking for those guys with two weeks in a row an [engine] blow up. We’ve got to keep fighting, keep working, and keep getting better each week.

Rajah Caruth finished in fifth after starting in the back.

“We got to get better, man, they kicked our butt two or three weeks in a row,” Caruth said post-race. “We’re better at the big tracks. We’re racing for a championship the last two weeks at Salem Speedway and Toledo Speedway, two short tracks. We’ve got to get better for them. But overall we got really lucky with their misfortune. [Dye] led all the laps and deserved it tonight and [I] hate that it happened to him. We salvaged and got a good points day.”

“Kind of disbelief,” Caruth answered regarding what happened when he passed Dye. “I just asked how that happened.”

“I can do a little bit more with my prep work,” Caruth said after unofficially becoming the series points leader. “Cause I was largely running this place wrong line-wise until the race. And so I got this one down and I got to do better next week.”

Rita Thomason, who is believed to be the first openly LGBTQ woman to compete in ARCA, finished out of the race in 12th.

ARCA heads to Elko Speedway for the Menards 250 on Saturday, June 25. The 250-lap race will begin at 9:30 p.m. ET with TV coverage provided by MAVTV Motorsports Network and available on FloRacing.

Mark Kristl contributed to this recap.

What exactly is supposed to be the point of ARCA if the results
continue to be one sided jokes with cars different # of laps down
within the top 10.