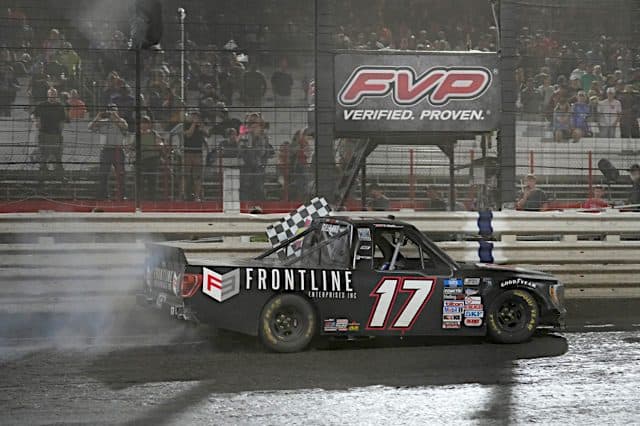 He claimed his third career victory in a one-off appearance for the NASCAR Cup Series driver. Gilliland took the lead from John Hunter Nemechek just before the caution came out and held on for the victory in the final few laps.

“I got us some golf tomorrow, some Father’s Day brunch and some golf…” Gilliland told FOX Sports about he and father David Gilliland’s plans. “This’ll make tomorrow a lot more fun.

“So amazing, man. The Cup Series is tough, just racing every single week. I’ve had like a million people ask me, ‘Is this really what you want to do in your off weekend?’ Absolutely. Nothing beats racing. I tell everyone, ‘I’m young.’ I wish I could do this every single weekend of the year. Just so happy for Seth Smith [crew chief], my whole team, David Gilliland Racing, Ford especially, Front Row [Motorsports] for letting me do it. Really, really cool, just so thankful. Frontline Enterprises, there’s so many people.

“I love the Truck Series, I ran here forever it felt like, so to be able to come back and to get one, man, it’s so special.”

“It’s awesome,” David Gilliland said. “Johnny Gray and I had a long phone conversation on Monday and we reached out to Todd to see if he could run this race for us. I knew he could win here. Just super special for DGR, everybody’s been working real, real hard. Haven’t been off to the start to the season that we were hoping for but hopefully this will be a good shot in the arm.

“Super proud of Todd, super proud of Seth Smith, he’s been with me since day one. He’s won K&N championships. This is his first Truck Series win and I think the first of many to come. I have all the faith in the world in him and in our organization. Just really proud of everybody at DGR, everybody’s been working really hard, this is truly a team effort. Super proud.”

Stage one saw a couple of cautions for incidents. Early on, Christian Eckes turned the No. 40 of Dean Thompson. Then near the end of the segment, Michael Kofoid made contact with Tanner Gray, sending him around slightly into the berm. Spencer Boyd slid into Gray soon after.

At the front of the field, Carson Hocevar held onto the lead for much of stage one, claiming the stage victory as Stewart Friesen slowed due to a flat tire.

In stage two, Jessica Friesen’s truck flipped and landed on the inside berm on lap 56. At the front, Hocevar maintained the lead through lap 66, just after the restart. His engine blew, and he retired from the race. His Niece Motorsports teammate Tyler Carpenter also went to the garage for a potential drive shaft issue.

… and just like that, the night is over for @CarsonHocevar. pic.twitter.com/Zw2rXCbosR

Some trucks stayed out while Gilliland pitted, including Brett Moffitt and Grant Enfinger. However, NASCAR ruled that Moffitt jumped the restart and issued the black flag for the No. 22.

Gilliland got by Enfinger for the lead, while John Hunter Nemechek followed through into second.

A few more cautions came out, one for a stopped truck and the next one for Moffitt and Gray.

Gilliland was able to keep the lead from Nemechek after a late race restart and won for David Gilliland Racing in the No. 17.

Crafton currently sits 27 points above the playoff cutline, while Kraus is 27 below.

I was surprised to see Hocevar retire with engine failure. Had It have been Rhodes the way his was overheating, that wouldn’t have been surprising.

Even in Cup engines are failing in numbers not seen in years.

I like John Hunter, but it was nice to see Todd win one for the family team.

I have to agree with his team, I’ll be interested to see what Buddy Kofoid can do with the 51 truck when it’s in it’s element on a paved track.