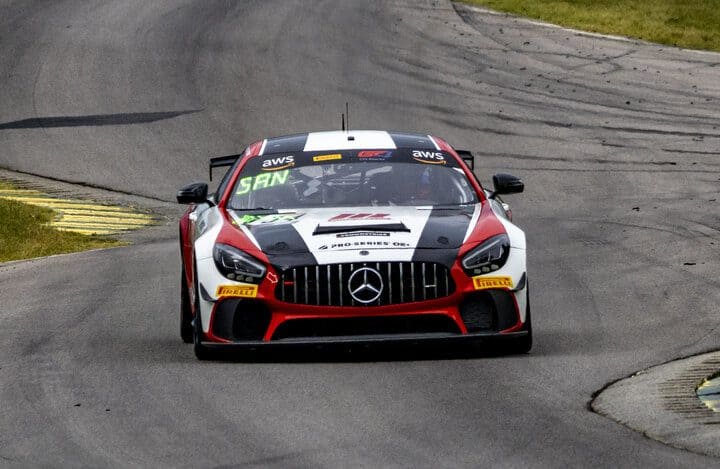 A massive shakeup due to an ill-timed safety car period gave Conquest Racing/JMF Motorsports’ Gavin Sanders the overall lead Sunday (June 19).  From there, Sanders held on to give himself and Michai Stephens their first win of the 2022 Pirelli GT4 America SprintX season at VIRginia International Raceway.

Rennsport One’s Stevan McAleer, fresh off his win from Saturday, started from the pole and looked to repeat his victory.  Unfortunately, this was another raced plagued by incidents.

On the first lap, two separate crashes resulted in a long red flag being thrown.  First, Hattori Motorsports’ Matt Plumb spun in the Snake and hit the inside wall.  He then spun back across the track and was hit hard by NOLAsport’s Seth Thomas.  Meanwhile, further back, Capstone Motorsports’ Cole Ciraulo spun and hit the barriers in an unrelated crash.

Plumb’s initial hit resulted in substantial damage to the barriers (meaning that it literally opened a sizable hole in the Armco) that resulted in the red flag being displayed for over an hour with less than five minutes completed.  During the red flag period, the race was officially shortened from one hour to 40 minutes.

The green flag came back out with 34 minutes to go.  McAleer continued to lead the Silver class and overall.  Behind him, BSport Racing’s Kenton Koch was able to get past Premier Racing’s Adam Adelson for second overall and the Pro-Am lead.

Due to the red flag, the pit stop window was pushed back eight minutes.  This ended up being critical.  On the first lap that the pit window was open, The Racers Group’s Derek DeBoer stopped on-track at the pit entry with fluids leaking out of his Porsche.  The thought with a number of the teams was that SRO America would leave the car there until after the sequence was done, then put the yellow out like they did on Saturday.

That was not the case as DeBoer’s Porsche was partially blocking the pit entry and the fluids were starting to run across the track.  What followed was confusion.

It appears that a number of the teams may have thought that the pit lane would be closed due to the caution, similar to what happens in NASCAR.  Others dove in at the first opportunity to make their mid-race driver changes.  Ultimately, this was allowed as legal, putting those who stayed out before the Acura NSX safety car picked up the field way behind.

Sanders put his No. 34 Mercedes in the overall lead by being the first driver off of the pit lane that pitted before the safety car neutralized the field.  Meanwhile, Filguerias ended up getting beat off of pit road by Bryan Putt in the BSport Aston Martin.  He ended up restarting in 22nd.  In the Rennsport One pits, they could only describe the situation as a miscommunication to SRO America’s Amanda Busick.

While Sanders was still in the Silver class, the pit road mess broke up the Silver stranglehold on the top spots.  Scott Noble, who crashed on the opening lap of Saturday’s race, moved up to second overall in his Porsche and attempted to battle Sanders for the overall lead.

Unfortunately, any chance of Noble putting the moves on Sanders ended with nine minutes to go.  At that time, KRUGSPEED’s Anthony Geraci pulled off in the Roller Coaster section of the track.  In addition, Moisey Uretsky, who had just won the GT4 class in the GT America race earlier in the morning, crashed into the tires.

These two incidents with nine minutes to go resulted in the race ending up under caution for the second day in a row.  Sanders and Stephens ended up walking out of VIR with their first win of the year.

In the overall standings, Sanders and Stephens won over Noble and Jason Hart.  SMOOGE Racing’s Kevin Conway and John Geesbreght were third in their Toyota, then The Heart of Racing’s Ian James and Gray Newell.  Flying Lizard Motorsports’ Andy Lee and Elias Sabo were fifth.

Sanders and Stephens also took the Silver win over Conway and Geesbreght.  AutoTechnic Racing’s Zac Anderson and Austen Smith were third, then McAleer and Filguerias, who only made it back to 16th overall by the finish.  Pro-Am had Noble and Hart winning over Newell and James.  Lee and Sabo were third, then Cameron Racing’s Guy Cosmo and Chris Cagnazzi.  Saturday’s winners John Capestro-Dubets and Tom Capizzi were fifth.

In the Am class, BimmerWorld Racing’s James Clay and Charlie Postins managed to finish 11th overall for the second day in a row to take the weekend sweep.  Rooster Hall Racing’s Johan Schwartz and Todd Brown were second in their BMW, then NOLAsport’s Sean Gibbons and Sam Owen.  AutoTechnic Racing’s No. 53 BMW for Alex Filsinger and Rob Walker was fourth, while The Racers Group’s Dr. James Rappaport and Robert Orcutt were fifth.