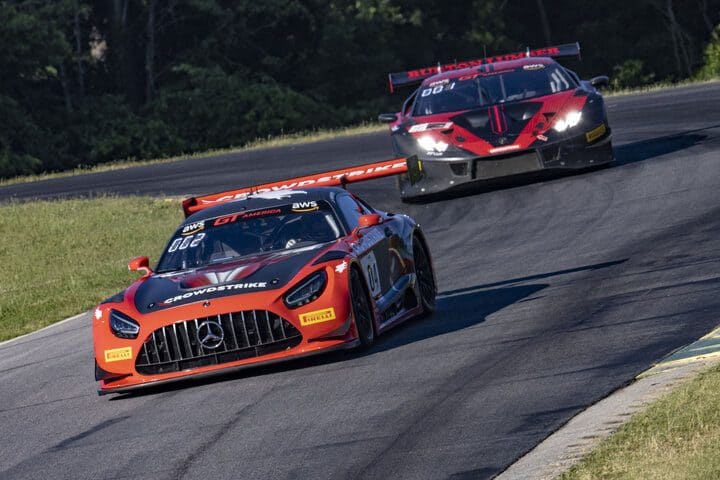 Kurtz was able to get the jump on Zelus Motorsports’ Jason Harward and pulled out a decent gap.  Meanwhile, Harward’s teammate Jeff Burton was able to snatch second on the start.  Very quickly, this became a two-car race between Kurtz and Burton.

Eventually, the leaders caught the back of the GT4 field.  Since VIR is narrow in places, getting by slower traffic can be tricky.  Kurtz did a pretty job getting through, but Burton ran into the back of RENNtech Motorsports’ Paul Kiebler just before the Oak Tree Turn, spinning out Kiebler.  Kiebler resumed before later dropping out.  Burton was given a drive-through penalty for the contact.

Burton’s penalty moved Harward back up to second, but he was unable to keep pace with Braun and quickly dropped five seconds back.  He was doing his best to try to keep up and that led to Harward sliding off-course in the Roller Coaster section and nosing into the tire barrier to bring out a full course caution.  Harward was ok, but was done for the day.

The cleanup took long enough that there was only time for a Green-White-Checker.  Kurtz was able to get a gap on the restart and held on for the win.

Kurtz’s margin of victory was .595 seconds over SKI Autosports’ Andy Pilgrim in his Ferrari 458 GT3.  Jason Daskalos was third in his Audi R8 LMS Ultra, then Mirco Schultis in the Callaway Corvette C7/GT3.  Triarsi Competizione’s Justin Wetherill was fifth in his Ferrari 488 GT3.

In GT4, Moisey Uretsky started from the pole in his Aston Martin, but Premier Racing’s Adam Adelson took the lead away in turn 4 on the first lap.  Uretsky was able to stalk Adelson for the next few laps before getting him back when Adelson got loose exiting turn 3.  That allowed Uretsky to get a run and pass Adelson back in turn 4.

Once out in front, Uretsky pulled out a couple of seconds over Adelson.  The full course caution negated this advantage.

The final two-lap sprint gave Adelson a couple more chances to go for the victory.  At the white flag, Adelson made a big dive to the inside for turn 1.  He was able to clear Uretsky briefly, but went wide, which allowed Uretsky to get the lead back.

On the long backstretch, Adelson got another run on Uretsky in his Porsche.  At the end of the straight, he made the move to the inside.  Unfortunately, Adelson went a little too far to the right and got into the grass.  This shot him across the track at the beginning of the Roller Coaster section and into the tire barrier, ending his chances at a weekend sweep.

Uretsky was able to hold on to take his first career victory in a GT4 car.  Uretsky ended up 1.108 seconds ahead of Rotek Racing’s Robb Holland, who just edged out GMG Racing’s Jason Bell at the line for second.  The Heart of Racing’s Gray Newell was fourth, while Ross Chouest was fifth in the Chouest Povoledo Racing Aston Martin.

GT America Powered by AWS teams will return to action the weekend of July 22-24 at Watkins Glen International in New York.  Frontstretch will be there to provide exclusive coverage of the event, including post-race interviews.