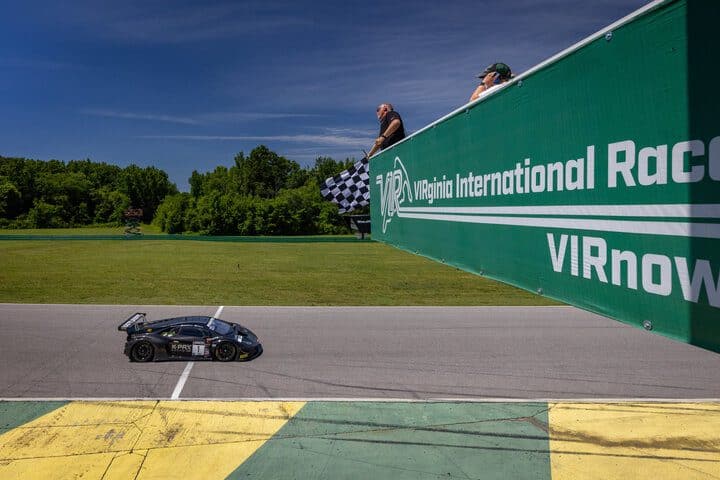 K-PAX Racing’s Michele Beretta took the overall lead away Sunday (June 19) from Racers Edge Motorsports’ Ashton Harrison with just under a half-hour to go.  From there, Beretta pulled away to give himself and Andrea Caldarelli their second straight Fanatec GT World Challenge America Powered by AWS weekend sweep.  It is Caldarelli’s sixth straight win to start the season, while it is Beretta’s fourth straight.

“We knew that today was going to be harder,” Caldarelli told SRO America’s Amanda Busick after the race.  “After a difficult start with the car getting bumped around, we tried to stay out a couple more laps [during the pit window].  I tried to push hard.  The team did a good job in the pit stop…and sent Michele [Beretta] out in front.”

Racers Edge Motorsports’ Mario Farnbacher started from the overall pole in his Pro-Am class Acura, but the likelihood of this was in doubt after Harrison ran into the back of Samantha Tan early in Race No. 1 on Saturday.  Only some spare parts from Rick Ware Racing allowed the team to make the start.

Farnbacher showed that despite the crash on Saturday, the team’s Acura NSX GT3 Evo22 had not lost anything.  He was able to out-drag outside pole sitter Ryan Dalziel to turn 1, then expanded his advantage.

The first full course caution came out very early when Zelus Motorsports’ Corey Lewis had some kind of mechanical issue on the first lap of the race at the end of the backstretch.  Lewis locked up the brakes on his Lamborghini, spun off-course and hit the tires.  Lewis was ok, but out on the spot.

Once the green came back out, Farnbacher was able to pull away from Colin Braun in second.  In the Pro class, US RaceTronics’ Loris Spinelli started on the pole and settled into third overall.  Caldarelli gave chase.

A second full course caution flew 21 minutes into the race when RealTime Racing’s Michael Cooper reportedly lost his brakes at the end of the backstretch and plowed into the back of Zelus Motorsports’ Madison Snow.  This contact resulted in both cars flying off-course into the tires and causing significant damage to the tire barriers.  Snow was ok, but Cooper appeared to be limping when he exited his Acura.

Both Snow and Cooper were out on the spot.  With two cars failing to take the start due to crash damage from Saturday, the wreck dropped the field down to 14 cars.  Repairs to the tire barrier resulted in a near 20-minute caution period.  As a result, the start of the pit window was pushed back by five minutes.

When the pit window opened, Spinelli pitted almost immediately to switch over to Steven Aghakhani, who was dealing with a burn to his hand that occurred in the pits.  Caldarelli pitted one lap later to swap to Beretta.  Both teams actually used their one-second “joker” here, but Caldarelli had a much faster in-lap.  As a result, Beretta came out of the pits with the Pro lead.

The Pro-Am teams stayed out much longer in order to maximize the driving time for the Pro drivers.  Braun was able to keep up with Farnbacher, but came under significant pressure from Dalziel.

The pit stops resulted in Harrison exiting the pits with a slightly bigger overall lead over Crowdstrike Racing’s George Kurtz.  Beretta was right behind Braun.  Meanwhile, Dalziel failed to get into the pit lane before the pit window closed.  That resulted in a drive-through penalty for Justin Wetherill.

Once Beretta took the overall lead, a number of the top runners fell off.  Aghakhani went wide exiting Hog Pen and ended up with a grille full of grass.  That forced Aghakhani to make an unscheduled pit stop.  Later on, Wright Motorsports’ Charlie Luck spun exiting the Climbing Esses and slid down the hill.  He was able to continue, but he lost a significant amount of time.  A second spin in the Oak Tree Turn cost the Richmond native even more time.

Aghakhani’s issues allowed Harrison to consolidate herself in second overall and pull away from Kurtz.  However, trouble struck when she went wide in Hog Pen with seven minutes to go.  Harrison slid her Acura through the grass, then spun.  At the time, Harrison had a 5.5 second lead over Kurtz, but that was gone in an instant as Harrison dropped back to seventh in Pro-Am.

Meanwhile, at the front of the field, Beretta was able to easily score the overall victory.  The margin of victory ended up being a massive 28.003 seconds over Kurtz and Braun.  Michael Dinan and Robby Foley were third overall, followed by BimmerWorld Racing’s Bill Auberlen and Chandler Hull.  Misha Goikhberg and Jordan Pepper were fifth in the second K-PAX Lamborghini.

Beretta and Caldarelli were 31.573 seconds ahead of Dinan and Foley in Pro.  Goikhberg and Pepper were third, while the unscheduled stop dropped Aghakhani and Spinelli to fourth.  In Pro-Am, Braun and Kurtz won by 7.418 seconds over Auberlen and Hull.  DXDT Racing’s David Askew and Dirk Mueller were third, followed by Luck and Jan Heylen despite Luck’s two late spins.  Harrison and Farnbacher ended up fifth, but that was only because the second DXDT Mercedes of Bryan Sellers and Scott Smithson were given a 30-second post-race penalty.

In the Am class, Triarsi Competizione’s Charlie Scardina and Onofrio Triarsi ended up racing by themselves after AF Corse’s Ferrari was forced to withdraw due to yesterday’s crash.  As a result, Scardina and Triarsi coasted to a weekend sweep.

Fanatec GT World Challenge America Powered by AWS teams will take a month off before the season resumes the weekend of July 22-24 with two races at Watkins Glen International.  Frontstretch will be on-site in the Finger Lakes to bring you the action.